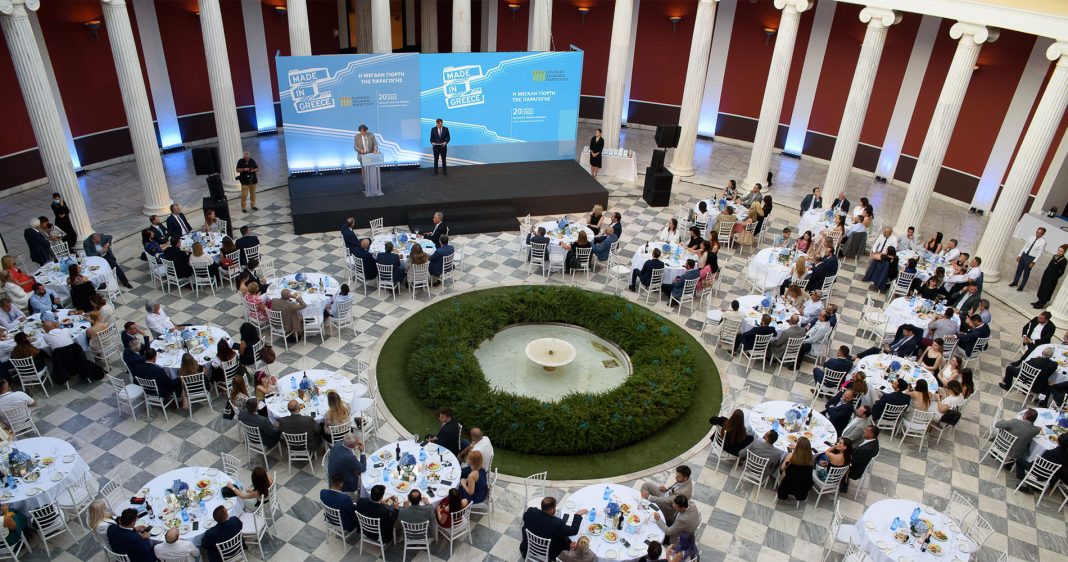 “Made in Greece 2022” Awards Ceremony took place on Monday, June 20, rewarding and showcasing companies that continue to create and invest in Greece.

Manufacturing companies active in the Greek land, performing exceptionally in the creation and distribution of products were awarded at the impressive Awards Ceremony “Made in Greece Awards 2022”, on Monday, June 20 at Zappeion Megaron. The event, considered since 2013 to be the great celebration of production in Greece, was organized by the Hellenic Academy of Marketing (ELAM) in collaboration with the Direction Business Network and is part of ELAM’s ongoing effort to strengthen and disseminate a new development model of innovation and extroversion, which meets all contemporary challenges in production, manufacturing and marketing.

The fifth in a row organization of “Made in Greece” awards was under the auspices of the Ministries of Finance, Development and Investment and Rural Development and Food, as well as the Municipality of Athens. The event of the Award Ceremony took place in the crowded Peristyle of Zappeion and was attended by representatives of political organizations, businesspeople, executives, and people of the press. During the ceremony, companies from throughout the Greek industrial and agricultural production sector were awarded, while key criteria for the evaluation were quality, innovation, diversification, targeted markets, international distribution networks, strong branding and the employment of domestic producers. 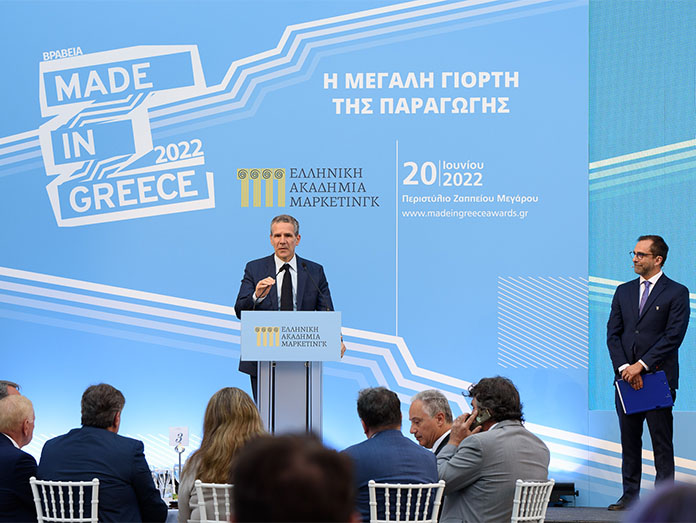 In the last two years, Greece has experienced a burst in investments and exports, and the next two years are expected to further broaden this area, meeting the challenge of high, but at the same time sustainable economic growth. Since 2013, Made in Greece’s motto is “We reward production, we are showcasing Greece”, highlighting the reconstruction of the Greek production and manufacturing field, which suffered greatly during the long-standing economic crisis, and still faces significant challenges, due to the outbreak of the pandemic, geopolitical tensions, the international energy and food crisis. Made in Greece Awards 2022, organized by ELAM, connect the productive and manufacturing basis of the country with the science of marketing through a renowned institution of excellence that highlights the creators of the Greek economy, those who proudly put on the packaging of their products the phrase “Made in Greece”.

About the Hellenic Academy of Marketing

Elam was founded for the scope of the promotion, application and dissemination of marketing science in Greece, in order to contribute to increasing the value offered by businesses to society and to improving the position of employees and consumers.

The Hellenic Academy of Marketing acts as a representative of the academic, professional, and business community of scientific marketing in Greece and contributes to the development of the country and the competitiveness of the Greek economy. Elam’s goals are, among others, the contribution to the development, productive reconstruction, competitiveness, and extroversion of the Greek economy, the gathering, systematization and development of the knowledge resulting from the experience of applying marketing in Greece with the aim of creating a “Greek school” of marketing, the creation of relationships and the exchange of information, opinions and experiences with scientists and scientific organizations, professional associations and institutions abroad, the research and measurement of business and consumer attitudes and behaviors, the training, transfer of know-how and certification of this know-how and skills to people, businesses and institutions, and last, but not least, the support with scientific means of the adoption and application of marketing and its tools in companies, organizations and agencies.

Women Entrepreneurship Award
The Hellenic Academy of Marketing, supporting the efforts to increase the participation of women in entrepreneurship and leading positions within companies, has established a new Greek entrepreneurship award, which will be awarded to women who have excelled and managed to stand out in companies that produce in Greece. This year’s award was given to Mrs. Ioanna Papadopoulou, President and CEO of Papadopoulos S.A.

Marketing Award «Georgios Avlonitis»
This award is in memory of George Avlonitis, the founder of Hellenic Academy of Marketing, and this year, it was given to two companies, one of them, LOUX, coming from the f&b sector.

Honorary Awards
Within the framework of the academy and the institution, honorary awards were given to companies and cooperatives of the Aegean islands. In particular, the honorary distinctions were given to:
• United Winemaking Agricultural Cooperative of Samos
• Chios Gum Mastic Growers Association L.L.C.
• Barbayannis Liquor Distilleries Ltd, based in Plomari, Lesvos