A new report highlights the dynamic course of Greek extra virgin olive oil exports in Great Britain, as well as their future potential –even in a post-Brexit scenario.

According to a report filed by the Greek Embassy in London, the first quarter of 2021 found the UK in the throes of the Covid-19 pandemic, with the tendency to prepare all meals at home cemented as a way of life. As a result, a significant increase in imports of extra virgin olive oil (EVOO), both in terms of quantity (27.6%) and value (33.1%) compared to the first quarter of 2020, was recorded.
Among the top three olive oil-producer countries supplying Britain, only Spain seems to be reducing its exports, Italy is consolidating its leading role, while Greece follows in third place with a significant increase (43.7% in quantity and 35% in value), but always with a low performance in absolute terms.

In 2020, the UK imported 28.5 thousand tons of EVOO, worth £75.9 million, an increase of 21% in terms of quantity but only 4.8% in terms of value compared to 2019. This significant increase in the volume of imports of extra virgin olive oil, mainly for domestic consumption, is explained by the fact that the restrictive measures imposed during to deal with the pandemic, led to an increased demand –of extreme nature in some cases.
During the first period of restrictions (end of March – May 2020), Britons resorted to mass panic buys, regardless of the origin, price, quality or other characteristics of the products. The compulsory consumption of all meals at home gave the opportunity to improve eating habits, and was time to experiment with new ingredients and recipes. At the same time, it established the need to simulate going out by recreating at home typical restaurant or holiday meals. With recognized and proven health benefits and evoking nostalgic associations with summer holidays in the Mediterranean, extra virgin olive oil seems to have gained ground in the minds of British consumers during the pandemic.

All three olive oil-producer countries supplying the UK –Italy, Spain and Greece– have increased their export volume in 2020. Italy, the leader in branded olive oil, now holds more than half of the market. Spain, which dominates the private label olive oil sector, with the lowest prices as always, recorded the lowest increase in volume (6%), which, combined with a decrease in price compared to 2019, led to a decline in its market share in terms of value (36.2%).
Greece remains in third place and far from the top two, with a 5.6% share and one of the most expensive products over time, despite a decline in the average price compared to 2019. Compared to the top two countries, Greece recorded the highest export growth in both quantity (43.3%) and value (30.2%).
The report of the Embassy, however, estimates that part of the increase in the Greek EVOO market share reflects additional imports made to address the sudden shortage of products –not necessarily Greek products– with Greek suppliers being at an advantage due to immediate availability. In any case, whether by choice or necessity, more British consumers tried Greek olive oil in 2020, creating a dynamic that could be exploited by Greek exporters. 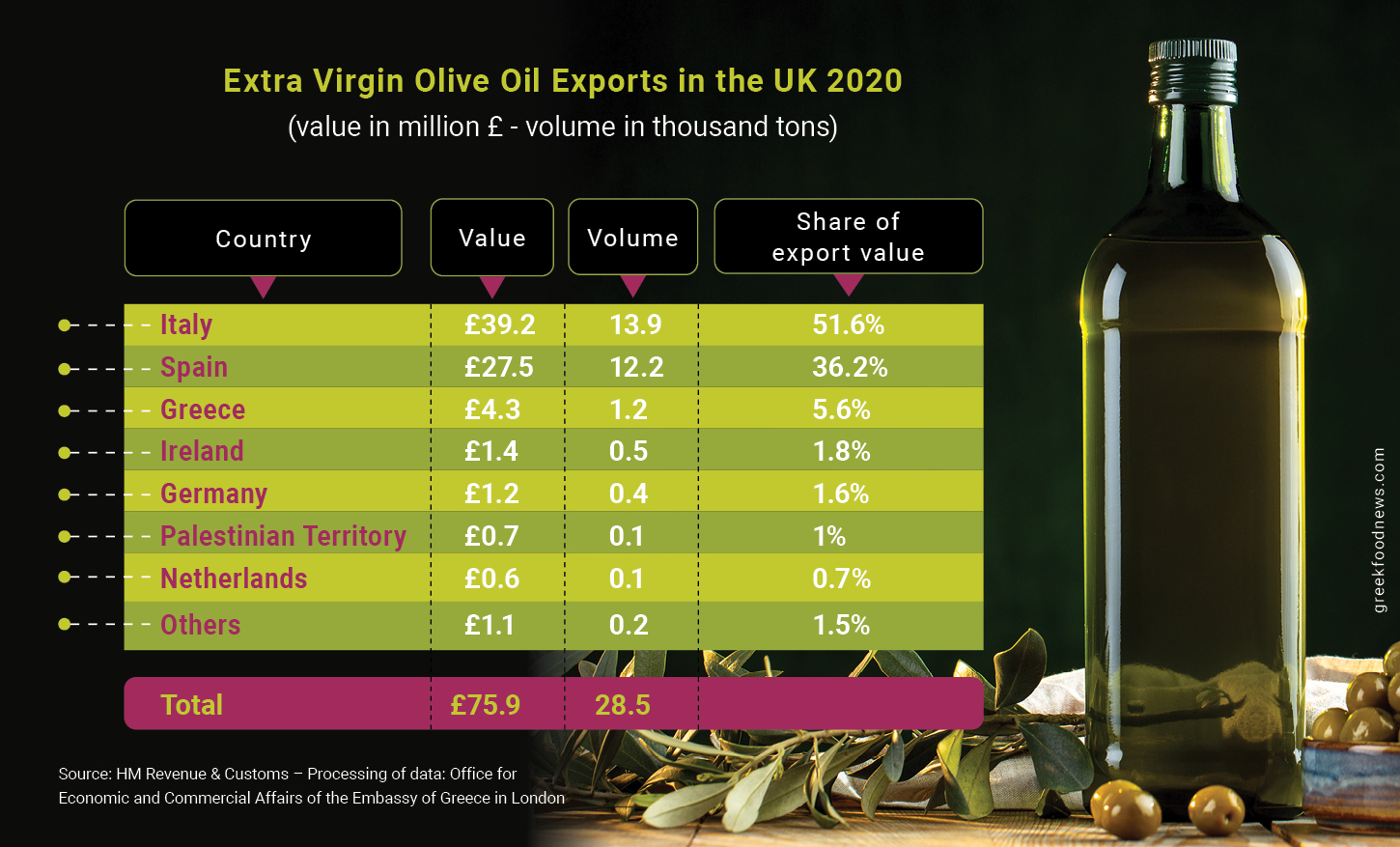 Other olive oil exports in the British market

The second major category of olive oil imported into the UK is the other, non-virgin oils. Here too, there has been an increase in imports, both in terms of quantity as well as value, and for the first time after three years of continuous dramatic decline (-45.5% average annual change rate in value between 2017-2019).
This development can also be explained in the context of trying to meet the extreme demand created by the pandemic. Moreover, as this category is also directed at the restaurant sector, it seems to have benefited from the opening of restaurants in July 2020 and until the end of the year.
In this category, Greece has a negligible share, although it has managed to double it in 2020. Spain dominates the category, albeit at a significantly lower price, losing share to Italy.
In third place, in terms of value regarding UK olive oil imports, are other virgin olive oils. There was a 17% increase in import volumes, but this did not translate into an increase in value, given the fall in product price in all countries except Greece.
Spain dominates this category too, with an increased share compared to 2019, which seems to have been won over by Italy and France. It is worth noting that although the average price of its product increased, even if only marginally, Greece more than doubled its share.