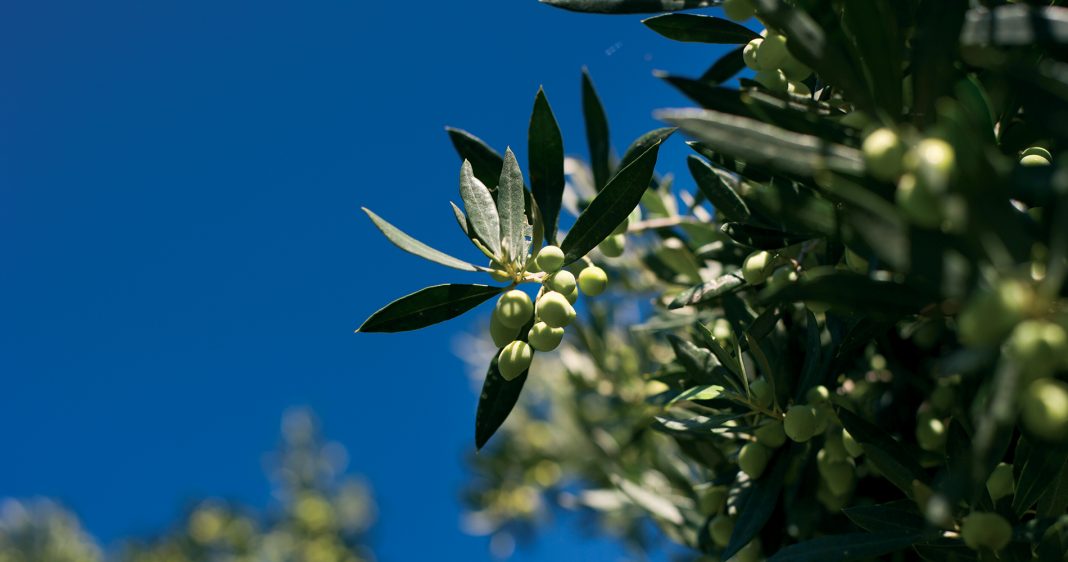 Agoureleo aka early harvest olive oil is highly priced in Greece, and rightly so. Full of nutrients and with an exciting peppery flavor, it appeals to discerning foreign markets as a choice ingredient of top-tier quality.

Remarkable organoleptic characteristics as well as exceptional nutritional attributes; these are the two things that make an olive oil really stand out. One of those phenomenal oils can be found in Greece and it’s called “Agoureleo”; that is “unripe” in the colloquial or, as experts know it, “early harvest” olive oil.
Early harvest virgin olive oil is definitely harder to find since it is produced from unripe olives that need to be painstakingly handpicked right from the tree –in Greece, harvesting is still, after millennia, done by hand and the olives are taken to the plant for processing on the same day. Gathering the fruit early gives the trees a much-needed break that leads to higher olive production volume with each passing year, while harvesting early reduces the chance of damage to olives from cold weather.
Agoureleo is highly priced in Greece, where many farmers keep the first oil of the season for personal consumption, leaving little available to be marketed and ultimately exported. Following a significant exposure of its benefits has increased its visibility and has helped international consumers warm up to the distinct taste of early harvest EVOO, thus creating increased demand for the stuff.

According to the study “Direct Measurement of Oleocanthal and Oleacein Levels in Olive Oil by Quantitative 1H NMR. Establishment of a New Index for the Characterization of Extra Virgin Olive Oils” conducted in 2012, there is a positive correlation of a high level of oleocanthal and oleacein in olive oils with the early time of harvest.
Oleocanthal has anti-inflammatory effect similar to Ibuprofen and Oleacein is a powerful antioxidant. Oleacein is a derivative of oleuropein and the most powerful antioxidant constituent of olive oil. Oleocanthal is said to have potential to inhibit tumor growth, and to offer protection against Alzheimer’s disease among other benefits. It is responsible for the pungency that comes from unripe olives in fresh olive oil and that irritates the throat. Chronic exposure to low doses of anti-inflammatory agents like oleocanthal offers protection against cardiovascular diseases and aging.
Furthermore, when olives are picked early in the season, they tend to produce a green-colorer oil as they have higher levels of chlorophyll. Since Agoureleo enjoys a high polyphenol as well as a higher chlorophyll content, it appeals to demanding foreign markets for both pharmaceutical use as well as an ingredient to gourmet restaurants all around the world.

The difference between early and late harvest EVOO

Both early and late harvest oils may be technically of similar quality but they are completely different in style. Olives reach their full size in the fall but may not fully ripen and alter their color from green to black until late winter –this is when they are usually picked, either for table consumption or to make olive oil. Green olives (usually picked between late October and early December) have somewhat less oil, are more bitter and are usually higher in polyphenols, phytochemicals with antioxidant properties. The oil produced from unripe, green olives tends to be more expensive because it takes more olives to make a litre, and harder to find, while it is prized for its superior qualities: Agoureleo, apart from being the most expensive and sought-after oil, also has the most aroma, a bright green color, and the highest antioxidant content. Its flavour is peppery, with notes of grass and green leaves.
On the contrary, waiting longer into winter to pick the olives (in some regions so late that they aren’t picked at all, but are allowed to fall into nets or onto the ground) means the fruit may have more oil, but the risk that it will be damaged by frost increases. Late harvest or black, “winter” olives produce mild oils with little varietal character. And because they are riper, like other ripe fruit, they have a light, mellow taste with little bitterness and more floral flavors.
Early harvest oils usually have a longer shelf life and are blended with late harvest oils to improve their shelf life. Due to their different taste properties, the two styles of oil are used in different ways in the kitchen.

In Northern Greece, in the Chalkidiki peninsula, the olive tree has been cultivated since antiquity. With its mild climate and its hilly terrain, the region is well suited for the cultivation of olives. In fact, 6 million olive trees cover almost 36,000 hectares of land in Chalkidiki. According to the latest estimates, more than 80 percent of the approximately 120,000 tons of Chalkidiki olives produced a year is exported to Europe, the U.S. (second export destination, only to Germany), Canada, Australia, even Africa.
The local olive variety, plumb and fleshy, produces not only a tasty table olive, but also extra virgin olive oil of high quality, with very low acidity and excellent organoleptic characteristics. When the fruit is harvested during the second half of October, it produces an exceptional early harvest olive oil (Agoureleo) exclusively from green, unripe olives, that are collected and pressed at low temperature on a daily basis. It should be noted that double the amount of unripe olives is required for the production of just one litre of oil.
This Agoureleo is packed unfiltered and retains the freshness and the peppery taste of the green olive and must be consumed raw at a short time after its production to fully appreciate its particular character.
The Union of Agricultural Cooperatives of Chalkidiki submitted to the European Commission in January 2009 an application requesting their local product to be given a designation of origin. Several years later, the organic raw olive oil of Chalkidiki, produced from the Chalkidiki olive variety, was named a PDO product under EU approval and under the name “Agoureleo Chalkidikis”. “Agoureleo Chalkidikis” is known for its low acidity and distinct, bright green color and pleasantly bitter characteristics. It is an extra virgin olive oil of superior category, cold pressed, and features a fruity, round flavour.

Find out more about Greek EVOOs >>