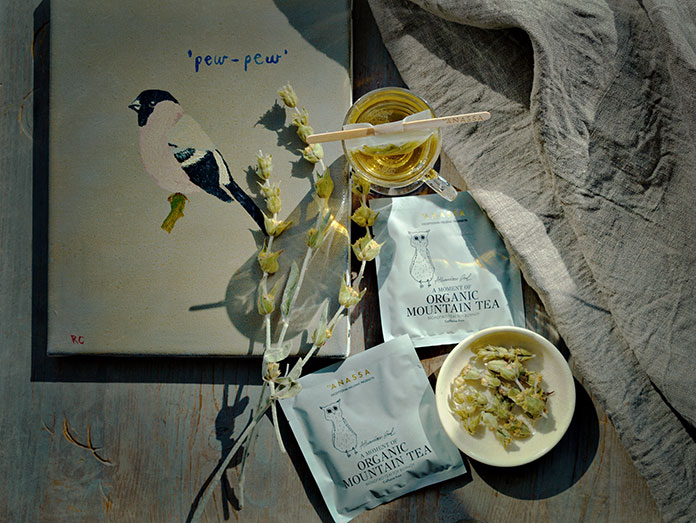 Anassa Organics, the Greek premium herbal tea company, is officially entering the Japanese market after signing an exclusive agreement with Kanazawa Daichi to retail its tea products in the country this December. The agreement comes on the heels of the brand’s entering Russia earlier this summer and Australia in October. Currently, Anassa exports to 18 countries throughout the world.
In Japan, the herbal teas (both tin box and sachets) will be sold on the Kanazawa Daichi website as well as in super market chains and department stores. It is worth noting that Anassa Organic products are the first imported products among Kanazawa Daichi’s portfolio.
Kanazawa Daichi (founded in 2002), a pioneer in the planning and development of Japan-produced organic foods and the “sixth industrialization of agriculture,” has announced that “organic, connected to the world, and a traditional culture nurtured in each region. We will deliver Anassa Organic to the Japanese market with the desire to mutually introduce food cultures that suit the needs of the Japanese market.”

Motomu Sugano, Executive Manager at Kanazawa Daichi stated that the herbal tea market share in Japan is not as big as coffee or tea, but was hoping the premium, organic Anassa products and their unique packaging would attract Japanese consumers.
“Coffee is still the biggest hot beverage in Japan. But more people are now interested in unique, healthy, organic products. As a caffeine-free alternative, Anassa’s herbal teas offer consumers a chance for relaxation.”
Chrisoula Sotiriou, Exports Manager at Anassa Organics, hopes the herbal tea concept of the Greek company will resonate with the Japanese culture and mentality.
“Herbal tea is increasingly consumed worldwide. Depending on countries, there is a 15-25% increase annually for herbal tea consumption.”
Ms Sotiriou is aware that Anassa is not the only brand selling herbal teas in Japan, but believes its concept and patented packaging will attract consumers. Especially since it encourages a ritualistic concept in herbal tea preparation, not unlike the ones followed for centuries in Asian countries, such as Japan.
“Our serving concept is unique,” explains Ms Sotiriou. “For instance, if you buy our tin teas, they come with filters and wooden sticks. It becomes a ritualistic experience for consumers.”
The Greek executive added that the brand would be working with Kanazawa Daichi on its branding and marketing strategy as far as the Japanese market is concerned. However, “We will not localize our labeling, our product, so we will not create blends with Japanese herbs. We will stay true to our Greek herbal teas which are unique and of high quality.”

As far as Asia is concerned, it is worth noting that Anassa Organics has also entered the South Korean market in 2016, Singapore in 2017 and Hong Kong in 2019. Ms Sotiriou said that South Korea is the company’s best performing market in Asia, with sales growing 5% a year.
She has also high hopes for Japan, which “is a trendsetter for this region, and if sales go well, it will reflect onto the rest of the region.”

India, a land of opportunity for Greek olive oil exporters

Presentation of a study on the potential of Agrologistics in Greece