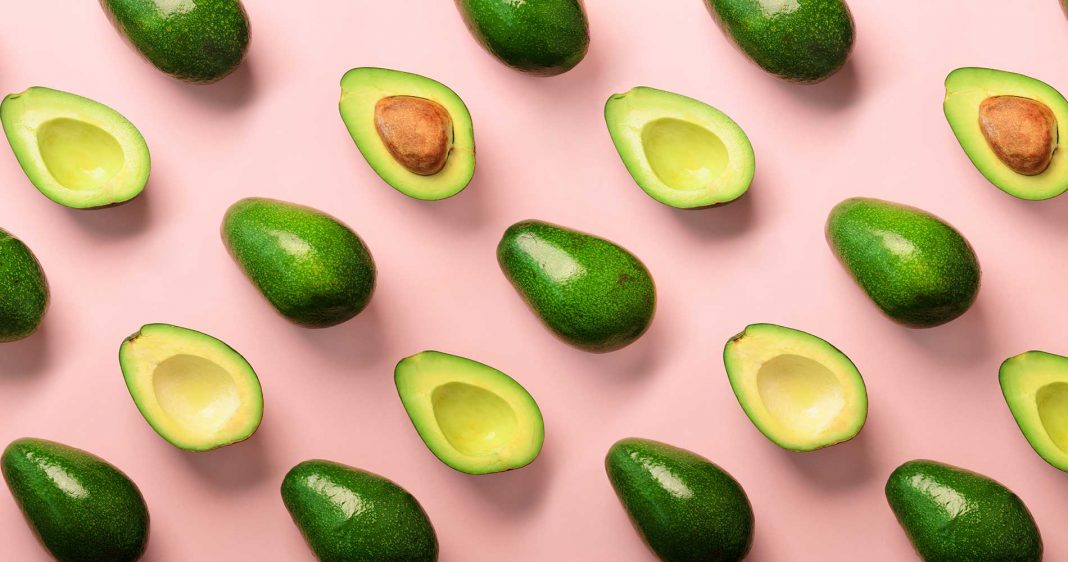 Avocado, one of the world’s trendiest fruit and a favorite “superfood”, is starting to gain ground with producers in Greece and especially Crete, leading to a surge in exports. This is what makes Greek avocados so special.

In 2017, global production of avocado reached 5,924,398 tons (showing a 5.5% growth compared to the previous year), while the numbers in 2018 have remained approximately the same. The largest avocado producer in the world is Mexico, while other significant producer regions are Peru, Indonesia, Chile, California, South Africa, Colombia, Israel, and Spain. Over 623,000 tons of avocado were sold in Europe within the year 2018, with Spain, South Africa, Peru, Kenya and Morocco among the main suppliers. 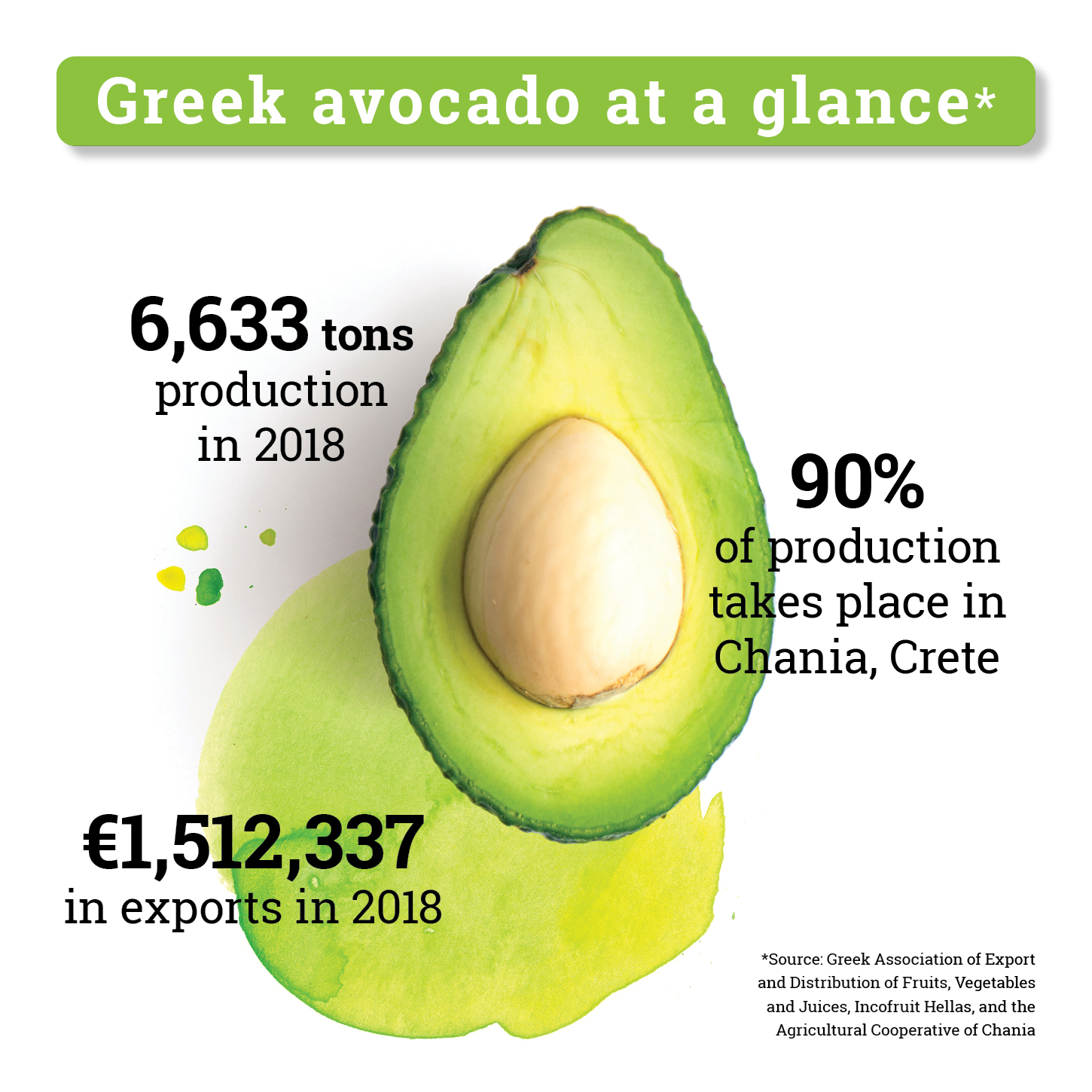 The Greek, the better

Greek avocado production in 2018 was 6,633 tons, showing a 4.7% growth compared to 2017. The avocado varieties cultivated in Greece are Hass, Lamb Hass, Zutano, Fuerte, etc. with most cultivators in the country preferring the Hass variety. Harvest season, however, could be extended by increasing the production of the rest of the varieties and adding new ones, thus expanding the harvest months. Most production takes place in the prefecture of Chania, in Crete.
“The analysis of the avocado market shows that consumption in Greece is approximately 8,000 tons a year, so Greek production is marginal and I think it needs an analysis-study of what tonnage is consumed in Crete to determine the height of production,” explains Mr George Polychronakis, Special Adviser to the Greek Association of Export and Distribution of Fruits, Vegetables and Juices, Incofruit Hellas. “It looks like the Greek market can bear the cost of 1.80 euro/kg of imported product compared to 1.38 euro/kg of export cost. Our producers need to protect the reputation of their product. In addition, avocado consumption in Europe is relatively limited, especially in Greece where it amounts to 0.650 kg per person per year. Therefore, marketing efforts to promote consumption should focus on encouraging the emergence of a ‘Greek avocado salad’, as well as integrating it into the restaurant and hotel menus in tourism areas starting from Crete,” he adds. 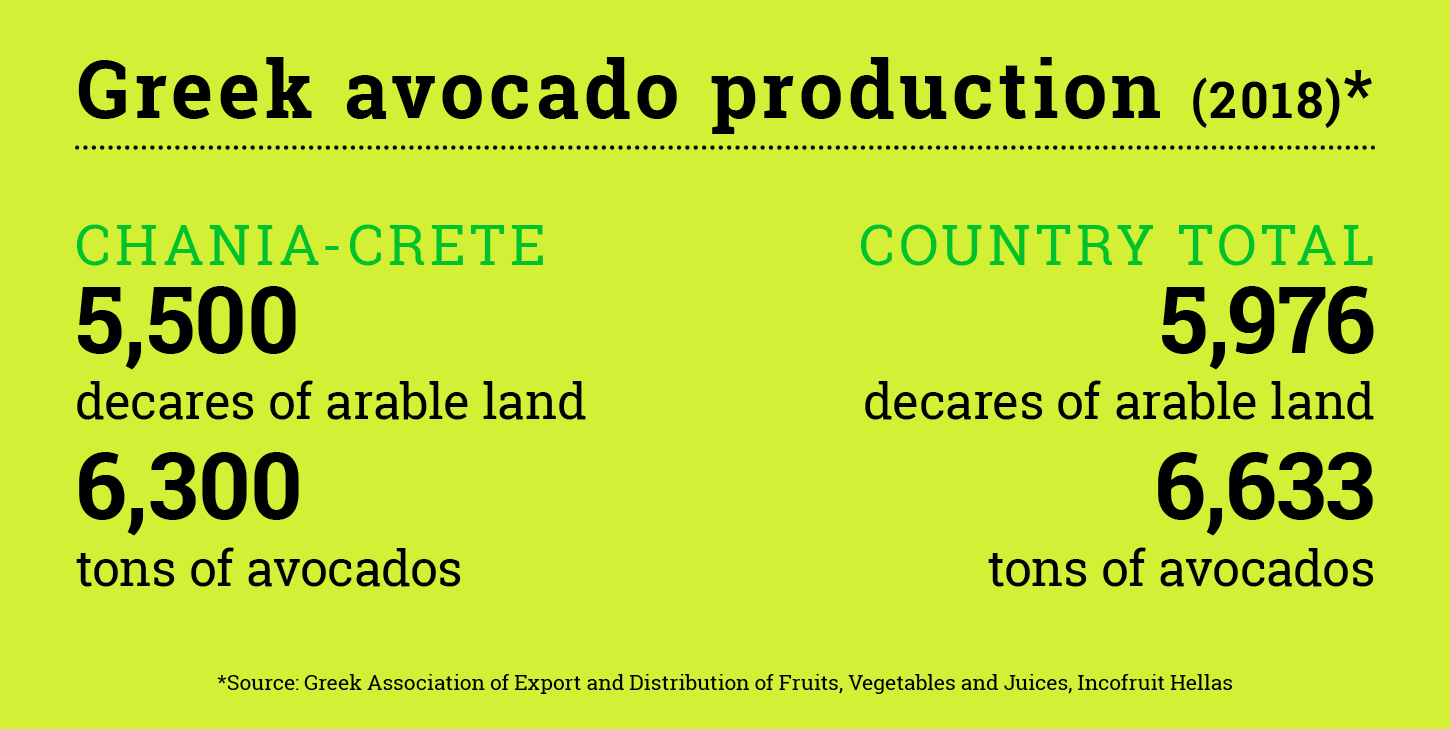 Cretan avocado and the PGI denomination

It is estimated that today about 90% of the avocados produced in Greece are grown in Western Crete, due to the combination of climatic and soil conditions in the area, which are ideal for avocado cultivation. The first avocado crops in the region were established as early as the 1960s.
The Citrus and Avocado Producers Association of the Agricultural Cooperative of Chania is responsible for producing quite unique avocados. Their exceptional flavor and rich nutrients have established the avocados of Chania among the most popular in Europe. As a matter of fact, a large proportion of the locally-produced avocados is exported to the markets of central and northern Europe.
“Lately, we are already seeing a shift in Greek producers’ cultivation preferences. The high prices of avocado combined with the low prices in citrus fruit and the various illnesses that have befallen them, have led to the planting of new avocado trees,” discloses Mr Giorgos Kornarakis from the Citrus Fruit, Avocado Department of the Agricultural Cooperative of Chania. “Avocado is a product that has a great future with producers in Chania. Therefore, it is imperative that the competent authority takes the necessary steps to ensure that avocado varieties are not planted uncontrollably but with a sense of a balance between early, mid-late and late varieties so that sufficient quantities of Greek avocado are available almost all year long.”
Cretan avocado has been famous throughout the world for decades. Its organoleptic characteristics make it extremely competitive, but the limited production volume compared to other countries makes things rather difficult. “The countries dominating world avocado production are Mexico, the US, Chile, Israel and South Africa, while large quantities are also produced in some Asian countries, such as Indonesia,” clarifies Mr Kornarakis. “The Agricultural Cooperative of Chania have set the target of producing high quality avocados, available not only in the Greek market but also in countries in central and northern Europe. We have already established some partnerships and export avocados along with other quality products from our cooperative in the Netherlands, Germany and Denmark.” 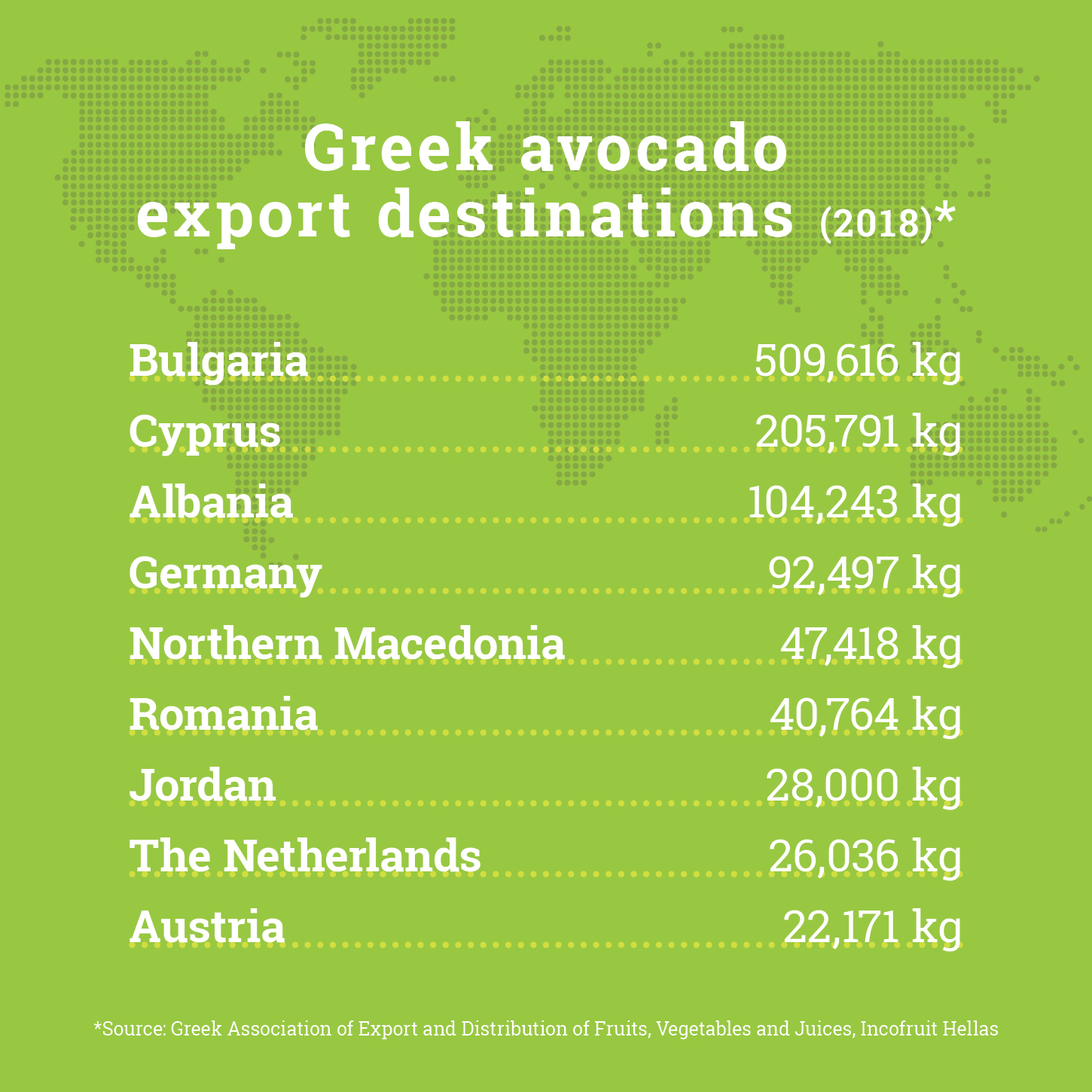 Mr Kornarakis, however, specifies that the major part of the production is exported fresh, but there is also a momentum in processed products, and especially avocado oil, as well as in sauces, spreads, etc. which is expected to further evolve in the coming years. There is also significant interest in ready-to-eat avocados.
The successful production of avocado in Greece during the last few years, seems to have energized the farmers of Crete. In fact, an effort to recognize the Cretan avocado as a Protected Geographical Indication (PGI) product –geographical indications promote and protect names of quality agricultural products and foodstuffs and give them added value– is currently underway. “We believe that until early 2020 we will be able to send to the European Commission all the necessary documents for its PGI designation,” states Mr Kornarakis. “This is a joint effort with the Region of Crete and the chemical department of the Aristotle University of Thessaloniki. If and when Cretan avocado gets a PGI designation, this will mean that it has its own ‘identity’, that its production and/or processing phase must be performed in a certain territory.”
The denomination refers to the Hass avocados, a late variety with the biggest commercial interest, since it is the one favored by international markets. The PGI denomination will give added value to the product and bestow specific quality features to it.

Did you know avocados contain around 20 minerals and vitamins which are essential to good health? Just like olive oil, the avocado is rich in monounsaturated fat, which is the so-called “good” fat, and lowers cholesterol. In addition, avocados contain substances that help protection against prostate cancer and breast cancer. They also contain significant amounts of potassium and folic acid, which contribute to better heart health and lower blood pressure.
A special property of the avocado is that it contains all the relevant amino acids needed to create a complete protein. Specifically, the plant protein of avocados is easily absorbed by the body, as the fruit also contains a large number of fibers. For these reasons, avocados are an important source of protein for many vegetarians.
The combination of vitamins C and E and omega-3 fatty acids found in avocados, has strong anti-inflammatory properties. These properties are the main reason why avocados help both in preventing and treating osteoarthritis and rheumatoid arthritis.

Special thanks to the Greek Association of Export and Distribution of Fruits, Vegetables and Juices, Incofruit Hellas, and the Agricultural Cooperative of Chania