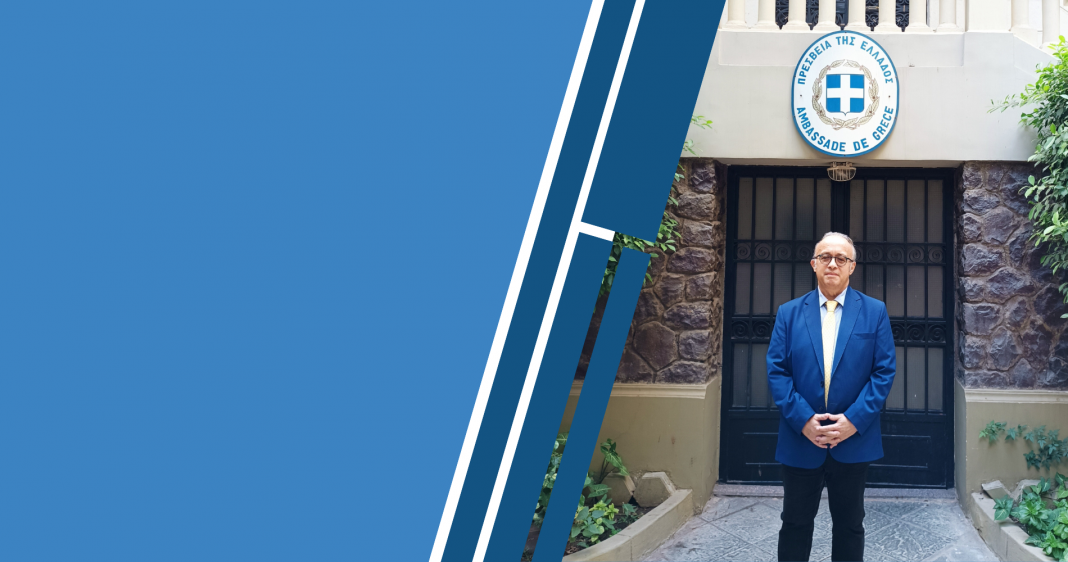 Can cultural affinity and closeness of mentality overwrite commercial blocks, specific disruptions caused by costly and time-consuming procedures and the extra difficulties caused by the war and the post-covid situation worldwide? Mr Periklis Davanelos, First Counsellor for Economic & Commercial Affairs, Head of Economic & Commercial Affairs Office at the Greek Embassy in Cairo gives Ambrosia magazine a comprehensive insight of the Egyptian market and the way a Greek exporter could penetrate it, taking under consideration certain criteria, and using the power of local partners who can provide valuable information, as well as the necessary networking.

What is the current image of Greek food products in the Egyptian market?
The image of Greece in Egypt is particularly positive, in general. There is a friendly disposition and attitude towards everything Greek from the Egyptians, not only because of the long historical friendship and cooperation between both people, but also because of the prevailing perception of cultural affinity and closeness of mentality on both sides.
Presently, we aim to diversify the export trade, which is currently dominated by petroleum products and cotton. More known / recognizable with a Greek “identity” are certain foods – Greek traditional products such as feta cheese, Kalamon olives, Greek olive oil, but also yogurt, which, however, are available in relatively small quantities and are aimed at consumers of medium to higher income levels. Also, fresh fruits (mainly apples, but also kiwis, peaches, nectarines and apricots) are an important part of Greek exports to Egypt, reaching $67 million in the country’s total exports, worth $319 million for the fiscal year 2021/ 2022. Other food categories that appear in the export tables are chocolates and other confectionery. 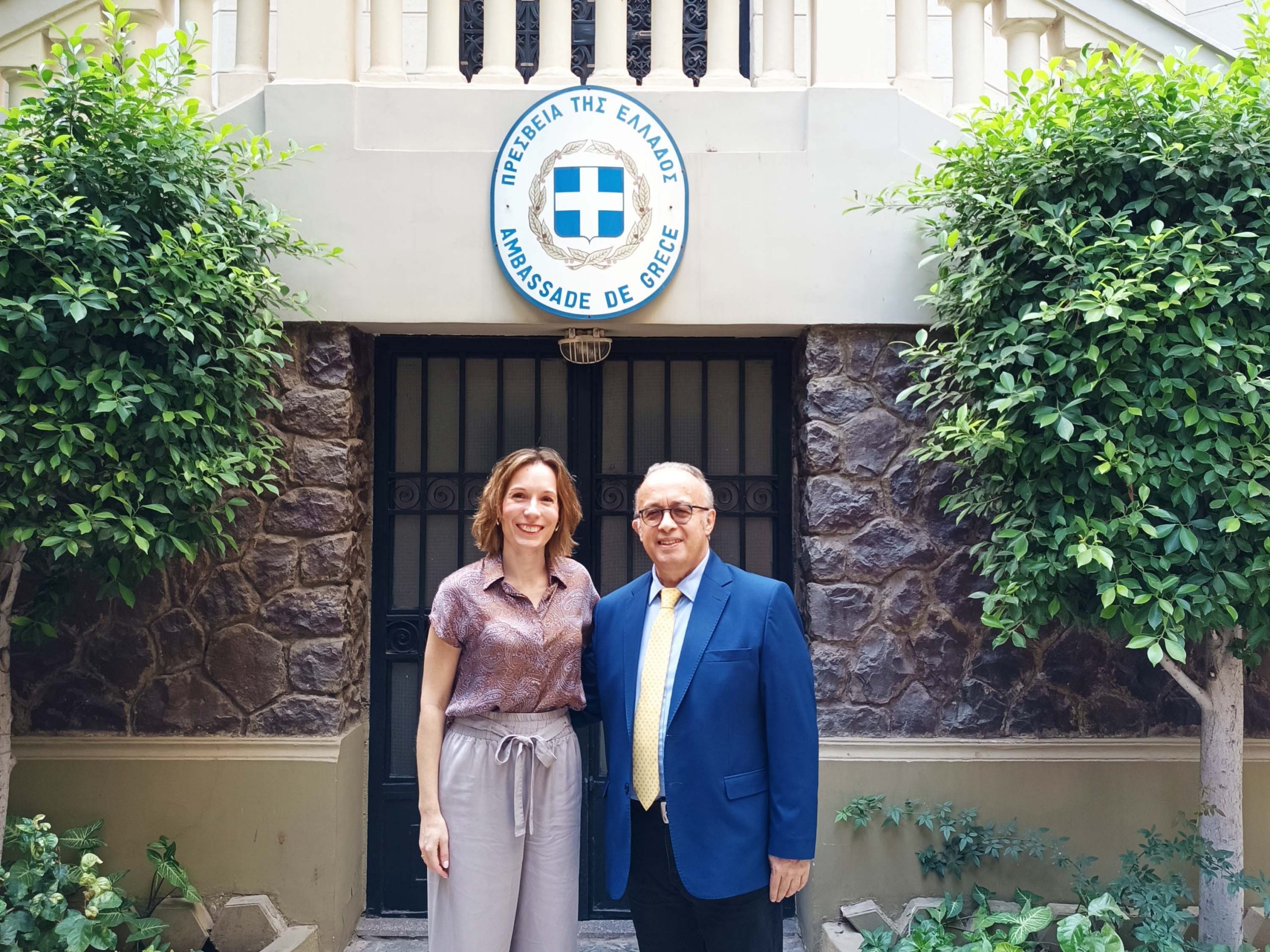 What are the particulars of the Egyptian market?
An EU-Egypt Association Agreement has been signed (2001) and has been implemented since 2004, which provides, among other things, for commercial and economic integration, the central element of which is the creation of a Free Trade Zone. The latter presupposes the tariff liberalization of agricultural and industrial products on both sides. According to the Customs Tariff in force in Egypt, the range of tariffs imposed on European products belonging to the food category varies from 0% to 32%, with most categories of products imported from the E.U. to have a zero tariff burden, in the framework of the tariff de-escalation provided for in the Association Agreement.
It is noted that the Egyptian state has implemented since March 16, 2016 legislation for specific categories of imported goods, which establishes a certification and registration procedure in a special register of the foreign units that produce them, as well as inspection of the goods before loading. This process (certification-registration of foreign production units) is considered particularly costly and time-consuming.
Albeit the import and consumption of alcoholic beverages being allowed in Egypt, the customs duties on such products are extremely high (ranging from 1200% to 3000%). Any imported products are traded only through hotels and duty-free shops, which carry out imports with special status and lower import duties, after permission from the General Organization for Export & Import Control (www.goeic.gov.eg, supervised by the Ministry of Commerce). It is worth noting that imports of alcoholic beverages for tourist purposes (from hotel units) are subject to a lower duty of 300%.

What are the current developments in the Egyptian economy?
The accumulated negative dynamics of the pandemic, and especially the Russian invasion of Ukraine, made the Egyptian economy particularly vulnerable, with foreign exchange outflows in the first half of 2022 estimated at $20 billion, with the rapid increase in inflation to 15% levels, and with the successive devaluations of the domestic currency (a new devaluation and a parallel increase in CBE interest rates are expected in the immediate future). The situation in the Egyptian market remains particularly critical. In relation to the ongoing problem with exporters’ payments and the non-issuance of letters of guarantee (Letters of Credit) by Egyptian banks, the ongoing obstacles in the import process in Egypt have effectively “deadened” important categories of import flows, especially in sectors that are not a priority for the country, including food and fresh fruit even more so.
It is pointed out, however, that, despite the various challenges, the Egyptian government is making efforts to normalize the situation. In particular, the negotiations with the IMF are being pursued intensively, in order to complete the loan agreement, which will breathe life into the Egyptian economy, including the improvement of foreign exchange reserves. From the Egyptian side, there is moderate optimism for the signing of the agreement by the end of this year. However, as Egyptian officials point out, the liberalization of trade will be gradual and will mainly concern products necessary for industrial production and, secondarily, for food. 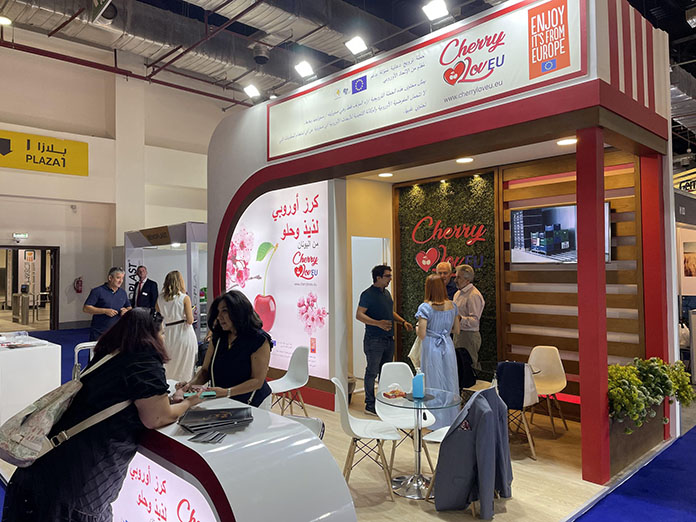 Photo from Sahara Expo, which took place between September 11th and 14th 2022 in Cairo.

Tell us a few things about the consumer standards in Egypt.
It should be taken into account that Egyptian consumers are traditionally price-oriented as a criterion that decisively influences the decision to purchase goods and services, a fact that is crucially reflected in the search by importers of low-priced goods even at the expense of quality. Gradually, however, and as the living standard of a significant part of the population rises, additional factors come into play that determine the consumer decision: mainly the quality, the useful life cycle of the product and the eventual costs of its maintenance.
Egypt has a consumer “elite” numbering about 5 million members, with a higher income level, a high level of education and familiar with foreign goods and services. This consumer public tends to prefer Western products and is looking for products and services with an optimal combination of quality and price. In addition to the above-mentioned narrow consumer “elite”, the target for the development of Greek exports in the country should be the middle to upper income level and Western-oriented consumer habits part of the upper middle Egyptian bourgeoisie, which is estimated to represent about 10 % to 15% of the total Egyptian population. The search for quality products by a significant portion of the Egyptian population (estimated at around 10-15 million) creates opportunities for Greek products, which in general have a good image and are highly valued in terms of quality among Egyptian consumers.
The prior thorough study of the market, possibly through the assistance of a trusted and competent Egyptian partner, as well as the ability to quickly readjust entry strategies according to the prevailing, often changing conditions, are decisive factors for the successful penetration in the Egyptian market.

What are the steps one should make in order to enter the Egyptian market?
In recent years, several large supermarket chains have developed, mainly in shopping centers. However, most food retailing takes place in small neighborhood stores and small domestic chain super markets.
The basic structure of the product route from the Greek exporter to the final Egyptian consumer can be depicted as follows:

Greek food businesses interested in exporting to Egypt should first identify a local importer or distributor with whom to build a relationship of trust, as domestic importers are the ones who have more knowledge, comfort in understanding the processes and therefore, the possibility of helping foreign exporters overcome the various obstacles that are sometimes placed on imports by the Egyptian government. Also, local importers better understand domestic distribution channels and already have collaborations with retailers. It should be noted that some large retail chains import directly, however the overwhelming majority of smaller and medium-sized retailers work through importers. Several international analysts even recommend the direct cooperation of foreign export companies with large retail chains, so that the import process can be accelerated and the products reach the target users/consumers faster.
Obtaining information on purchases of specific products is not particularly easy in Egypt, as statistics are either unavailable or, in some cases, unreliable. It is thus considered necessary to find a good local partner who knows the market well, or even to hire local partners or a marketing company, in order to gather more information about the market, beyond what will be provided by the Cairo Economic & Commercial Affairs Office, when they come to us.
It is important for every Greek exporter who is interested in this market, to determine whether the products of his interest have the potential to access and penetrate the market, as well as to what kind of procedures (registration, etc.) their import is subject to. Our Office can provide them with updated and valid information in regard to this aspect.

What would you say are the prospects of Greek f&b exports in Egypt?
We believe that the prospects of Greek dairy products in the Egyptian market could be remarkable, however the Greek product has fierce competition to face, mainly from domestically produced, inferior quality and price dairy products. The name “feta” is almost “commonly used” in Egypt, and it is not protected – like any other European PDO-PGI product – by the existing EU-Egypt association agreement. The term “Greek yogurt” is used by the Egyptian dairy industry, attracting local consumers who are willing to pay a little more to buy the locally produced “Greek” yogurt. The same goes for Greek olive oil, which has to face quite sharp competition primarily from domestically produced olive oils of inferior quality and price, but also from cheap oils of other origins, mainly from Spain and the Arab countries.

Actions to promote Greek exports
In the context of the Strategic Outreach Plan and the actions promoted by our Office to promote Greek exports, our constant suggestion is, firstly, the organization of business missions from Greece, targeting specific sectors. Such missions are usually organized in cooperation with competent bodies of the two countries and with our own assistance.
In addition, an important part for the promotion of Greek products is the participation of Greek export companies and organizations in sectoral International Exhibitions. For Egypt, and in the food sector in particular, the most important exhibition is the FOOD AFRICA International Exhibition, which will take place in Cairo 5-7/12/2022. Also, in the last two years, promotional actions were carried out for Greek cherry producers through the co-financed European Program “Cherry LovEU”, which included business meetings between producers from the Chambers of Pella and Pieria, and Egyptian importers, with encouraging results.
Within 2023, a large representative business mission is planned under Mr. K. Fragkogiannis, Deputy Minister responsible for the country’s foreign economic diplomacy, where the f & b sector is expected to be represented accordingly.

AGROKNOW HUB: A center for research, innovation, and entrepreneurship