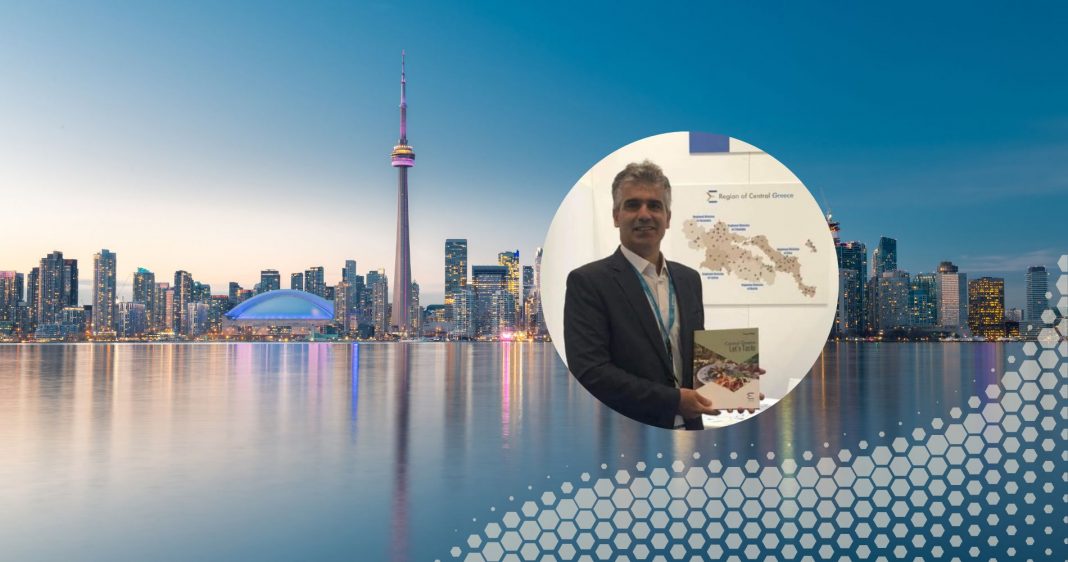 Every foreign market has its own keys and secrets in order to be accessed, and the Canadian one is no exception. Long distances, bilingual labels, strong competition by products from other American markets (Mexico, USA) are some of the disadvantages that Greek food and beverage companies have to deal with in order to win over the Canadians. Nonetheless, there has been an impressive rise in the Greek exports in Canada during the last years, and all prospects are excellent. Dionysios Protopapas, Senior Trade Commissioner at the Consulate General of Greece in Toronto, gives Ambrosia magazine a comprehensive insight about this important market.

What would you consider the biggest advantage and disadvantage for Greek food and beverage companies who wish to enter the Canadian market?
The Canadian and the US markets, or the North American market, present so many common characteristics that would allow us to consider it as a single market. Often products developed for one of the two markets, could easily target the other one too. However labeling requirements are different. On top of that, labels in Canada must be in both English and French.
The long distance between consumer centers is however a disadvantage. Areas close to the Atlantic coast are easier to access from Greece but due to the long distance with the Western part of Canada, the market is fragmented, and the one-importer-fits-all approach usually does not work.

So, how can a Greek agri-food company access this huge market?
Canada may be a huge country, but more than 90% of Canadians live within 250 kilometers of the US border. Quebec (Montreal) and Ontario (Toronto) with 23 million people (8.4 million and 14.6 million, respectively) are home to 61.5% of the country’s population and represent a similar portion of Canada’s national income and its economic power. Especially new to the market Greek export companies, can focus on these two areas first, gain experience and then explore other Provinces. Middle to large size importers are often active in both Quebec and Ontario, but smaller ones focus on just one of the two. Exporters interested into other markets, such as Vancouver and Alberta should contact importers based there.
In all cases though, shipments from Greece arrive to the port of Halifax on the Atlantic and are then loaded onto trains to reach their destination. There is even a direct shipping line from Piraeus. Depending on the route, a shipment can reach Toronto within 20 to 40 days. Another more expensive solution is to use ports on the Eastern coast of the US. The latter makes sense when importers on either Canada or the US serve both countries. 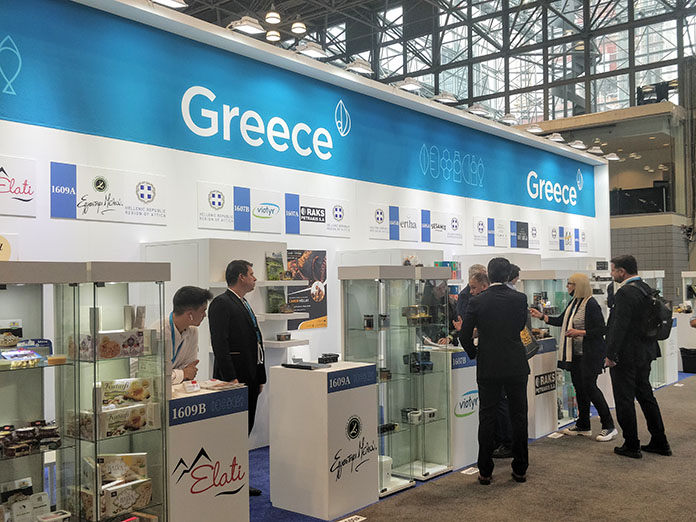 A lot is being said about CETA, the Comprehensive Economic and Trade Agreement between the EU and Canada. How does it affect Greek companies?
In several positive ways. Signed in 2017, CETA is not exclusive, but also a free-trade agreement between Canada and the EU. It has not been ratified yet by Greece and several other EU members, but the chapters concerning the reduction or often the elimination of import tariffs, and the mutual recognition of PDO products are in effect with significant results. Our exports to Canada have been consistently rising since 2017. In particular, Greek food and beverage exports rose by 57% between 2017 and 2022 reaching 43 mil. €, with excellent prospects.

Which product categories would you consider as most promising for Greek exports?
Olives are Greece’s export champion with 19,5 mil. € in 2021 and a good presence in supermarkets. Feta cheese benefited greatly from CETA, reaching 5,8 mil. €, an increase of 121% since 2017 and excellent prospects. Interestingly, local imitations are not cheaper, which in my opinion means that we should stress on Greek feta’s authenticity and superior taste to gain market share and get a higher price. Honey, despite facing difficulties and delays with customs clearance procedures due to its nature, is very promising. It reached 1,3 mil. €, a 75% increase since 2017, steadily rising. As with feta, our asset is the superior taste and content of Greek honey. Seabass and seabream had a spectacular increase of 1000% each since 2017, reaching exports of 4,7 mil. and 2,8 mil. respectively. They are sold in many restaurants and supermarkets. And then, we have fresh Greek kiwis at 7,6 mil. € or an increase of 630% since the signing of CETA, and preserved cherries at 4,3 mil. € with a 990% increase. I also really believe in the prospects of figs, fresh and dried, and asparagus. In most categories, our main competitors are Mexico and the US, because Canadian companies are used to doing business with them.

Why is Greek olive oil performing modestly in Canada? What are its prospects?
It is true that Greek olive oil has been performing modestly during the last three years with a value of 6,2 to 6,4 mil. €, down from more than 10 mil. € a few years ago. However Italian olive oil in Canada has faired even worse and the reason is the rise of Tunisian and Spanish competition, which eroded our market share. We can take steps to improve the situation, such as better design of the whole bottle and label to keep up with the market. We should also explore ways to expand distribution to a larger number of mainstream supermarkets focusing on the superior quality of the content and finding ingenious ways to showcase its history and place in our culture.

Are international exhibitions as important as in other countries for exporters?
Certainly, they are. However, the largest exhibition is the Summer Fancy Show in New York, which draws buyers from the whole of North America. There is also SIAL Canada taking place in Toronto in 2023 but it has a smaller scale and attendance. Lacking major Canadian exhibitions, I would recommend to our exporters to dedicate some time and resources to individually travel to Canada. We will be glad to arrange meetings with importers and distributors for them.

Let’s focus a bit on wine and beer. It is well known that access to the Canadian market is totally different than in other developed markets. Does it make things easier or more difficult for suppliers?
Canada is a special case. It is a free market but not so much in alcoholic beverages. Each Province has its own monopoly through which everything flows. Importers are even called agents because of that. It is a problem and a blessing at the same time. Each monopoly has a huge network of stores and online business. But, on the other hand we only need to target one customer and their promotional programs, instead of a large number of potential importers. That requires though market research and serious preparation. Competition is fierce. A big range of good wines is available at 15 to 20 CAD. Still, Canada is the 3rd best buyer of Greek wines and alcoholic beverages after Germany and the USA. Briefly put, exporters need to adapt to local conditions, but it is doable. The situation with beer. Our exports are modest standing at around 100 th. €. Prospects are good but numbers are very modest and due to the way the import system works, we lack a constant availability of the products.

You are involved in a major effort to increase the presence of Greek wines to Canada. Can it make a difference?
Together with Enterprise Greece and Wines of Greece we will host a high-level delegation of LCBO, Ontario’s alcohol monopoly. By all accounts, we should be selling to Toronto (Ontario) as much wine as we sell to Montreal (Quebec) but our sales stand at only one fifth. What I see there is not a problem, but a huge opportunity to correct that. In this trip, LCBO representatives will taste 300 wines from over 70 wineries during 9 wine tastings around Greece and will also take several crash courses on Greek wine. Naturally, we have high expectations. I believe that we can repeat this model-trip with other provincial monopolies. I stress that this action is not an EU funded program, but Greece completely owns it. It is about time to be confident and create our own programs which will be effective and tuned to our needs without unnecessary restrictions.

What are the food trends in Canada?
Multi-culti. Healthy. Sustainable. As local as possible. Food safety. Home-made convenience and artisan cooking. Vegan is on the rise (another opportunity for Greek companies).

Could you summarize the Canadian business culture in a few words?
Polite and friendly. Informal. Quite casual. Ties are too official. Colors and patterns in clothing are welcome. Everyone is addressed with the first name. Only in the first introduction both names are used. Multicultural. Everyone matters. Respect for the Indigenous people of Canada. And if you are in Quebec, speak French or at least make a serious effort.