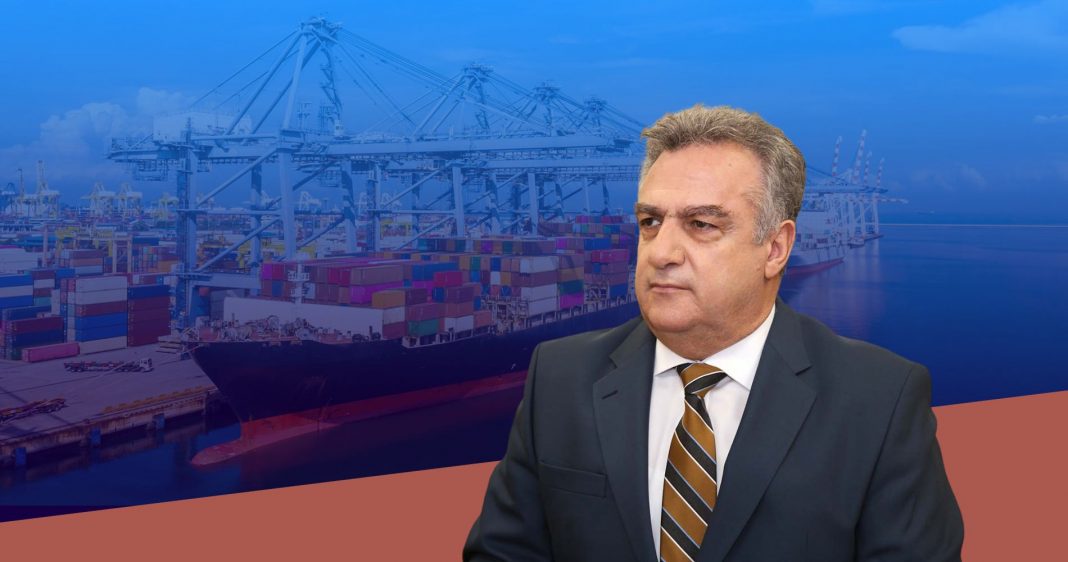 Simon Diamantidis, the new president of SEVE (Greek Exporters Association), talks to Ambrosia Magazine about exports, problem solving and the goals of the new management.

You have just assumed your duties as the new president of SEVE. Put under a general perspective, what are the goals of the new administration?
The strategic goal of SEVE was, is and will always be the strengthening of the extroversion of the Greek economy. The new administration will do everything in its power to make it a reality. To help the reader quantify this goal, consider that exports should reach 25% of the GDP by 2024, from 22% in 2021. In the next four years we plan to have two main axes of activity. The first will be on the support of companies who currently export, and businesses with export potential. The second axis will concern SEVE’s activity as an advisor to the state in matters of extroversion.
Exports, you know, have huge prospects as an industry for our country and although there has been a significant increase in recent years, they have not reached their full potential. This fact automatically creates challenges for SEVE, which is the country’s largest extroversion organization. To this today, the vast majority of exports are carried out by a few large firms, which means that there is a large number of brands, firms and companies that have not entered the extroversion game. So, a big goal of ours is to increase the number of companies that export and to strengthen the extroversion of very small, small and medium-sized companies.
One of SEVE’s most important initiatives is the registration at the EU Intellectual Property Office (EUIPO) of a Collective Mark of the European Union (according to articles 74 et seq. of Regulation 2017/1001), with the name “M MACEDONIA THE GREAT” which all Greek businesses whose products or services come from the geographical region of Macedonia and currently are (or will become) members of SEVE will be able to use.
SEVE’s pursuit in the immediate future -and through an approved project- is the participation (in the widest extend possible) of Macedonian businesses that, after receiving information and training, will be in a position to adopt the Macedonian Logo free of charge.

Is there a malfunction or problem that you consider a priority to change during your tenure?
Exporters are currently facing significant problems. Rising costs of raw materials and transportation, soaring inflation and the energy crisis; all these create a mix of disincentives for the development of international trade, which we must manage and address with interventions and measures, if we are really interested in limiting the consequences. Our actions will determine to a significant extent the viability of businesses on one hand, and their development in international markets on the other.
However, if we should identify an important problem in our industry that requires prompt solutions, that is the ever-increasing trade deficit. Imports are constantly increasing -31.1% in the period 2020-2021-, which has a negative effect on the Greek economy. A plan to deal with the phenomenon of the trade deficit increase is therefore needed, the main axes being the strengthening of domestic production and the substitution of imported products with Greek ones. That is why, at SEVE, we support the ever-present doctrine “Produce and Export”.

What is the position of the F&B sector in total Greek exports?
Undoubtably, the food and beverages sector – and the primary sector in general – is the strong card of exports and the economy. In 2021 the sector’s exports reached 6.8 billion euros (6.0 billion in 2020 and 5.4 billion in 2019), with their share in total exports exceeding 17%. Particularly important is the fact that the sector now shows a surplus in its trade balance of 258.4 million euros, while two years ago it had a 750.1 million euros deficit. The sector has been moving upwards in recent years and this is due both to the quality of the products and to the endless efforts of the exporters to deliver Greek food in every corner of the planet today.

Do you think there is a possibility to improve this position, and if so, under what conditions?
There are clearly prospects for improving the position of the sector, both in terms of Greek exports as a whole and in terms of their position in international markets. As I said before, it is important to give incentives to the sector’s SMEs to develop their extroversion.
At SEVE we strongly believe in synergies in the form of export clusters. This is a completely successful model for countries like Greece, where the vast majority of businesses are small and medium-sized. In the international markets, the competition is intense and we are called upon to rise above companies of much greater scope. A small Greek company can have products of much better quality than a large company from a foreign country, but it cannot compete with it in marketing and technology, considering the volume that a large company can cover and the resources at its disposal. That said, we believe that many small businesses can do wonders.
Another very important factor for strengthening the position of Greek food and beverages in international markets is international branding. We have not taken advantage to the fullest extend elements such as our history, our cultural heritage, but also the fact that our products are in the basis of the most famous diet in the world, the Mediterranean diet. This is what we are trying to do at SEVE with the Macedonian products brand, a brand that will dominate the international markets and will be recognized by all foreign consumers, businesses and states. We strongly believe in this move and that is why we want all businesses in the three regions of Macedonia to adopt it and -above all- to make use of it. Of course, this is a national effort that we want all businesses in the country to recognize and support, because the example of the Macedonian brand can be adopted by other regions of Greece, such as Crete and the Peloponnese. Our purpose is to highlight the local comparative advantages, under the umbrella of our national brand, Greece. In recent years we have greatly improved the quality of food and drinks. I strongly believe the time has come to improve our image in the international markets, too.

Greek exports on a strong footing —3.8% increase in November 2020