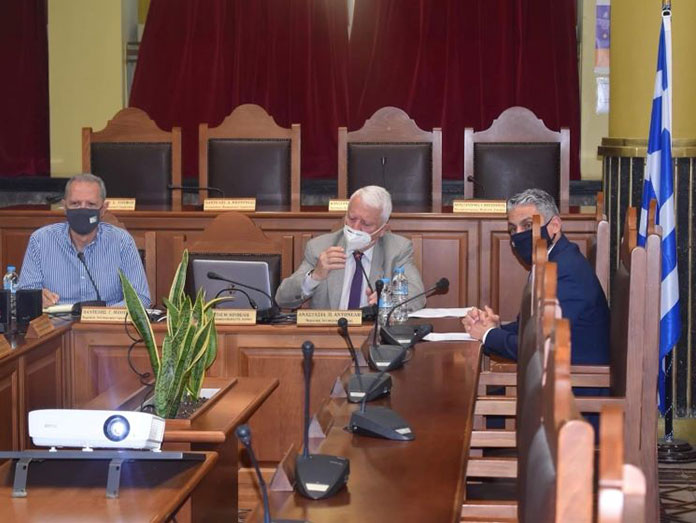 The expansion of cooperation between the Region of North Aegean and the organization ELGO-Demeter in three points, was announced a few days ago at a press conference given by the Regional Governor, Mr Konstantinos Moutzouris and the President of ELGO, Mr Serkos Haroutounian, in the presence of the Deputy Regional Minister for the Primary Sector, Mr Panagos Koufelos, the Executive Secretary of the Region, Mr Apostolos Alatzas, and the Head of the Rural Development Department, Mr George Lagoutaris.

The purpose of the press conference was to announce the further expansion of the cooperation between the two parties in the following points:

Enhancing the value of local products and farmers

“We are joining forces to offer substantial assistance to the farmers of our Region, since, according to surveys, only 3.6% in Greece and 24.8% in Europe have the relevant training to perform well in their profession”, stressed the Regional Governor, underlining “we must create a ‘hive’ of knowledge and training of farmers on the islands, with the ultimate goal of improving production and the utilization of the potential of each farmer and their property”.
The President of ELGO stressed that “within two months there will be a more detailed master plan, for the utilization of the Region’s products through certification, the utilization of the two, milk and olive oil, laboratories and the implementation of training programs, while the seminars on beekeeping by the Ministry of Rural Development & Food are still in progress”.
Mr Haroutounian also referred to “the implementation of a program by the Agricultural University of Athens, especially regarding products that can be produced in NATURA-designated areas and in facilities within these areas and the granting of a specific identification mark highlighting them as special and unique”.