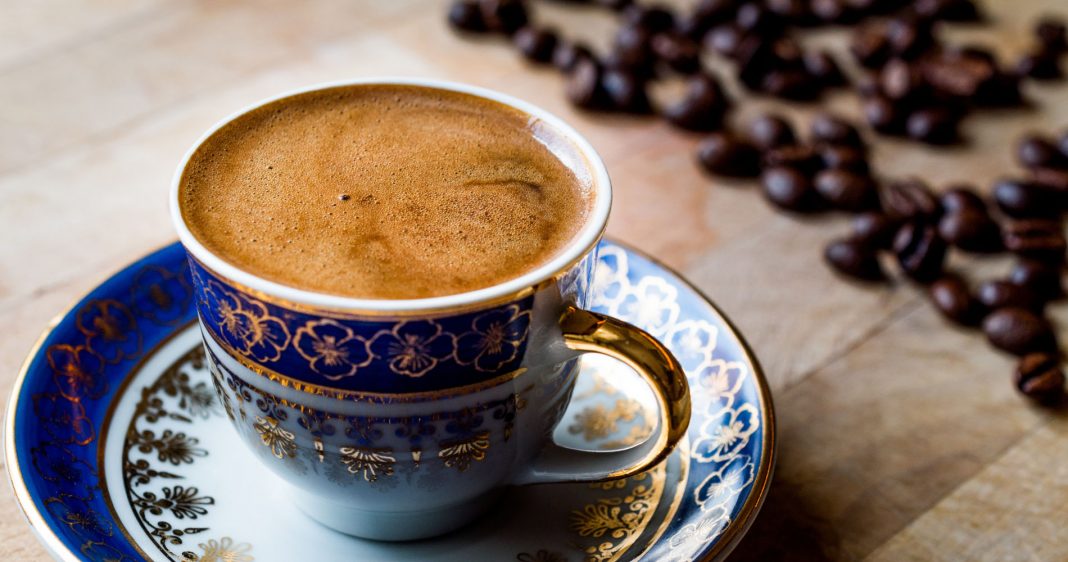 Did you know that Greek coffee is not only delicious but also packed with heart-healthy compounds? Discover all that makes it stand out.

Ellinikos or Greek coffee as it is widely known, was actually born in Yemen centuries ago. An Ottoman governor stationed in the country in the 16th century fell in love with it and introduced it to Sultan Suleiman the Magnificent, who popularized coffee throughout the Ottoman empire (Greece included). Almost a hundred years later, Sultan Murad IV outlawed coffee, calling it an indecent drink, and chopped off the heads of those who drank it. Coffee, obviously, won out.
In Greece, coffee culture was established first in the north, in Thessaloniki, and later on in Athens, where cafés serving Ellinikos opened sometime in 1834. Initially, traditional cafés were frequented solely by men, while women, and families hung out at chic patisseries that offered both Greek as well as European, filtered coffee. Nowadays, these first, original cafés –what’s left of them– bring together people from all ages, young and old, locals as well as tourists that appreciate its strong taste.

In Greece, cafés are required by law to serve Greek coffee; otherwise they may encounter problems getting their coffee shop license.

Coffee is an integral part of Greek culture. Greeks talk, chat, and play backgammon around coffee. Not surprisingly, Greece has an annual coffee consumption of 5.5 kg per capita (more than the French or the Italians), and coffee drinking is not just a simple habit –it is a daily ritual. Ellinikos is actually a method of preparing unfiltered coffee, not some kind of coffee in itself. Therefore, there is no special type of bean. Beans are roasted, finely ground, then heated in a small pot called ibrik or briki. Greek coffee blends are sold, packaged, to discerning customers all over the world.
Unfortunately, Ellinikos is not particularly famous in other countries, and especially outside Greek communities, but Greek coffee companies are currently trying to popularize it.

A groundbreaking study shows that coffee, and especially Greek coffee could provide extra protection against cardiovascular disease, and promote longevity. In general, coffee is considered to be good for the heart since it contains high levels of protective antioxidants and polyphenols. However, what makes Greek coffee superior is its concentration and preparation, both of which deliver more protective compounds in each little cup.
Ellinikos or Greek coffee is boiled rather than brewed. This process helps extract much more nutrients from the beans than the filtering method. Additionally, Greek coffee is comprised of Arabica coffee beans, which are ground down to a very fine powder, thus delivering more concentrated antioxidants than in a cup of regular coffee. Rich in chlorogenic acid, polyphenols, lipid-soluble substances and other heart-healthy compounds, Greek coffee has been shown to help protect the arteries, as well as lower the risk for diabetes and boost the immune system.

During the preparation, beans are  boiled in a pot  called ibrik. Boiling coffee in the sand is a rare, traditional technique. The sand offers a more consistent heat and a better end result. Greek coffee goes well with spoon sweets and a glass of cold water.

Although not many people in the world are familiar with Greek coffee, there still exists a somewhat international interest. The war in Iraq gave journalists, soldiers and many others the chance to try similar coffee blends, and get acquainted with their strong flavor. In addition, the numerous health benefits of Greek coffee have turned it into a micro-trend.
Greek coffee producing companies are recognized for the exceptional quality of their unique blends, and have earned the respect of countries with great tradition in what is known in that part of the world as Arabic coffee.

The Greek coffee market has not suffered severe losses despite the economic crisis -it even saw rise during the pandemic-, mainly because of the Greeks staying true to their “addiction”, but also because exports are booming. In fact, exports of Greek coffee are steadily on the rise: Greece Exports of coffee, tea and spices was US$38.63 Million during 2021, according to the United Nations COMTRADE database on international trade.
Exports head primarily to markets with a strong Greek element (Germany, the U.S., Canada, and Australia), as well as in countries where similar kinds of coffee are popular –Turkey is the No1 Greek coffee importer. Although the beans are imported, coffee is grinded and packaged in Greece in different blends (from dark coffee to decaf) and sizes. According to industry insiders, most of Greek coffee exports go to wholesalers catering the Horeca sector, while a smaller percentage finds its way to supermarkets and delis featuring ethnic products.