Ambrosia Magazine
Home Market News Events for the promotion of Greek products in the UK, “Bites of... 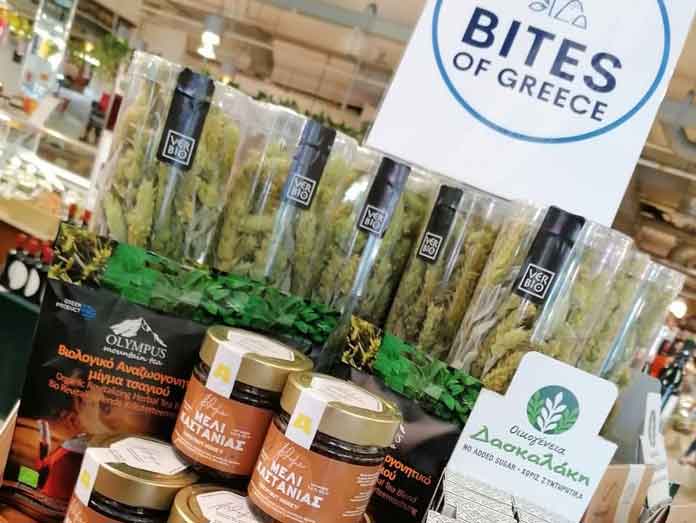 The first of three events promoting Greek products under the name “Bites of Greece”, which will take place in the British capital until the end of July, was launched at the beginning of June and completed a few days ago, at the famous Patridges quality and specialty Food and Beverage store in London’s fashionable Chelsea neighborhood.
Partridges is one of the few remaining family-run food shops in Central London and still cherishes its original idea of providing the very finest quality foods. The events are organized under the auspices of Enterprise Greece, the Embassy of Greece in London, and the British Hellenic Chamber of Commerce, together with the Region of Attica, the Region of Central Greece, Central Macedonia, the Region of Epirus, and Ionian Islands.
The first event, aimed primarily at international consumers, included two specially-designed showcases placed in the central part of the store, featuring quality Greek Food & Beverages from 60 companies. The products were selected to meet British consumer trends related to healthy eating. Among others, table olives, olive oils, honey, jams, wine, traditional pasta, herbs, organic products, coffee, etc. were offered.

A plethora of exciting events

Furthermore, Bites of Greece is organizing a string of gastronomic events that will surely bring British consumers closer to quality Greek Food & Beverages. For example, on July 1, a Greek honey tasting event was held featuring six regional honeys in a flight devised to showcase the quality and unique characteristics of each varietal, while on July 8, a Greek olive oil tasting will take place, that will introduce the public to Greek olive oil regions and their characteristics, as well as health and nutrition benefits. At the same time, a pop-up Greek Deli store in Islington will run until July 13th, packed with honeys, dips and spreads, jams and preserves, bread and ready meals, olive oils and olives, pasta and rice, sauces and dressings, confectionery and snacks, teas and coffees, and wines and beers, with more than 600 organic, conventional, free-from, vegan, vegeterarian, and artisanal products.

Find out more about the Bites of Greece initiative.