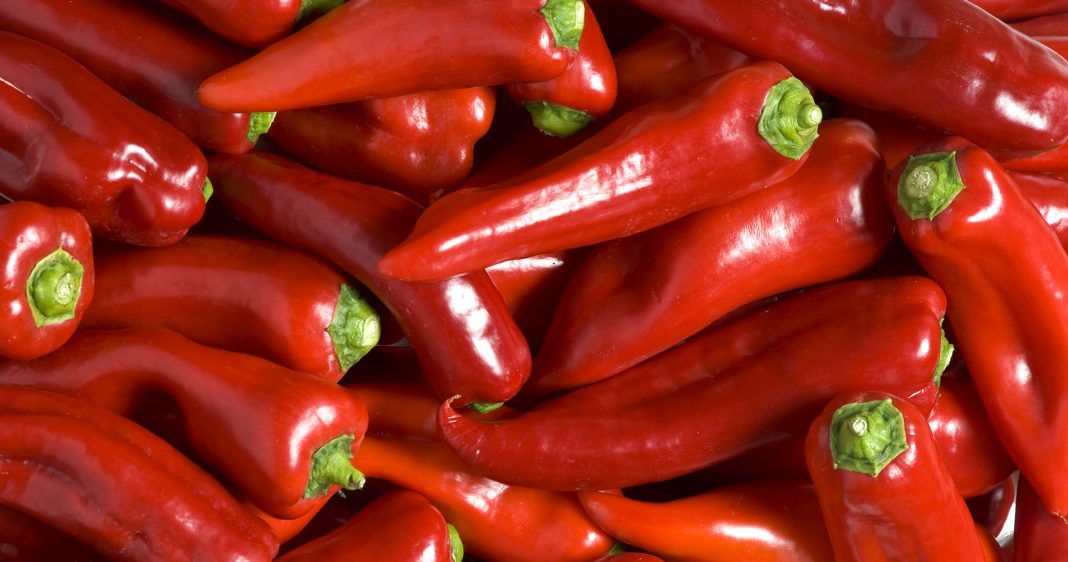 Red, sweet and delicious, peppers from the region of Florina in Northern Greece, are a versatile –prized for its gastronomic and nutritional value– product that has found its way to stores all over the world.

In Greece, in the year 2018, 40,283 acres of peppers were cultivated and 158,801 tons of peppers were produced, according to Mr George Polychronakis, Special Adviser to the Greek Association of Export and Distribution of Fruits, Vegetables and Juices – Incofruit Hellas. Of these, 29,820 acres were outdoor crops which produced 63,233 tons of peppers, while exports for the year 2018 amounted to 19,139 tons.
As reported by Incofruit, it has been estimated that total world pepper production (Capsicum & Pimenta) exceeds 34 million tons, with an annual increase of 2%. Of those, 35-32 million tons produced annually, almost half comes from China (approximately 16 million tons), followed by Mexico, Turkey, Indonesia, and Spain. Greece is in 22nd place.

The Florina pepper is a pepper cultivated in the Greek region of Western Macedonia and specifically in the area of Florina, for which it is named. Its color is deep red and it is shaped like a horn. The pepper was brought to Greece in the 17th century and has since been cultivated successfully by the locals as it adapted to the Macedonian climate and soil. The pepper belongs to the capsicum genus of the nightshade family Solanaceae. The word “capsicum” originates from the Greek word “kapto”, meaning “to devour”. Florina peppers have been a PDO product since 1994.
Production starts with the collection of the seeds from the previous year’s plants. They are, then, put into nurseries to grow until May, when they will be transported and planted in the fields. The peppers will not grow bigger than 50-60 centimeters and do not need much water, even during the period between July and August when the peppers start to develop. Initially, the pepper has a green color, ripening into red, after the 15th of August, and, accordingly, harvest begins after that particular date and ends around the first days of November, when the first winter cold starts to set in. A good quality, red pepper of Florina should be bright in color, thick, firm, and sweet flavored.
Florina peppers have a lower yield per acre than regular red bell peppers, and therefore cost more.
“We should definitely separate the red peppers produced in the rest of Greece from the peppers cultivated in Western Macedonia,” explains Mr Petros Naoumidis of Naoumidis Family, the largest producer of Florina peppers in Greece. “What makes them different is their quality. We are still talking about red peppers, of course, but when talking about Florina peppers, this is a variety that cannot be produced in Crete or Kavala or elsewhere. This particular variety has certain characteristics that were acquired here, in this specific location in Macedonia, in Florina, and that’s why they are called Florina peppers. These characteristics have everything to do with the land and the special climate conditions of the region.”

In Greece, peppers are mostly cultivated in fields, with approximately 10% of production taking place in green houses. Of particular importance is the fact that there are new plantings of Florina peppers every year, thus giving further prospects for product development, both inside and outside the Greek market. The fact that there are now more Florina peppers standardization units is associated with the increased demand observed, which is generally a high value-added commodity. It is estimated that production will continue to increase due to new flavors and offerings. It is worth mentioning that across the Prefecture of Florina, about 6,000 acres are cultivated with Florina peppers, where planting takes place at the end of April and the harvest begins in September.

The Florina red pepper is known in Greece for its rich sweet flavor, it is used in various Greek dishes and is exported in different types of products all around the globe. The characteristics of this particular variety are the length of the peppers and the thickness of the flesh, which makes it perfect for pickling. Florina peppers can be eaten raw, but they are usually hand-peeled, keeping the natural scents of pepper and are topped with extra virgin olive oil, salt and vinegar. They can also be canned, frozen and dried; they can be served as an appetizer or garnish Greek salads. A well-known traditional recipe in Greece with stuffed peppers is “gemista”, although bell peppers are mostly used. Ground, the Florina variety is also used in the preparation of sweet red pepper.
The most popular offering both at the Greek and international markets is the classic roasted pepper fillet in brine or olive oil. Other, more exciting products include spreads, chutneys and marmalades, sauces, as well as stuffed or sun-dried peppers. Different ingredients, such as pumpkin, tomato, grapes, mushrooms, Feta cheese, and different herbs, are also mixed with Florina peppers to create innovative flavors that can satisfy even the most discerning palate.
During the last couple of years, small companies mostly around West Macedonia have started producing Florina pepper offerings based on local traditional recipes, that have started to find their way to delicatessens and c-stores all over Greece and the world. Nowadays, Florina peppers are not an exotic, obscure vegetable, but a gourmet product worthy of the international spotlight.

Special thanks to Naoumidis Family & the Greek Association of Export and Distribution of Fruits, Vegetables and Juices – Incofruit Hellas.