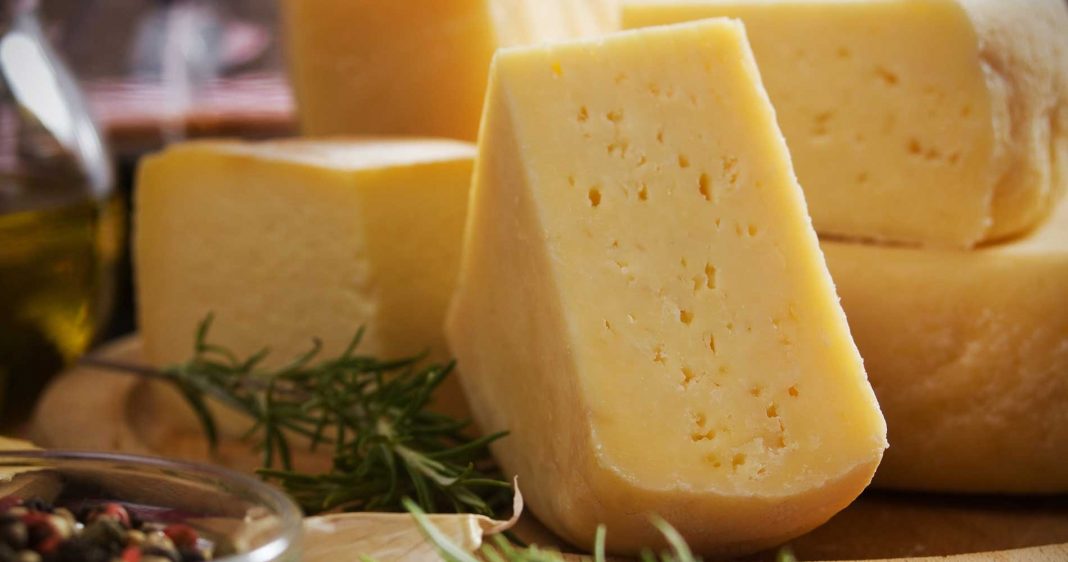 Almost every region in Greece takes great pride in the fact that it produces its very own, local Graviera cheese, while three of them are registered as products of protected designation of origin. But what exactly do we know about Greek Graviera?

Graviera is Greece’s second most popular cheese after Feta. The very first Graviera was produced in the country in 1914 by a cheesemaker in the Peloponnese and was based on the recipe of the Swiss Gruyère cheese (even the name itself, Graviera, is somewhat derived from Gruyère), but with one significant difference: cow’s milk was replaced by sheep and goat’s milk.
Since then, the recipe has evolved and was amended, while cow’s milk was also used for certain types of the cheese, so that nowadays Greek Gravieras have no connection whatsoever with the original Swiss version.
There are three PDO Gravieras in Greece: Graviera Agrafon (produced in Western Thessaly and Evritania), Graviera Kritis (produced in Crete) and Graviera Naxou (from the island of Naxos in the Cyclades). Production of exceptional Graviera cheese –although not registered as PDO– also takes place in the islands of Tinos (from cow’s milk), Lesvos, as well as in the region of Epirus and the municipality of Amfilochia.
In conclusion, Graviera is a cheese with a big “personality” and a great variety –from sweet to very spicy– to fit every taste.

What’s in a Graviera

Regardless of flavor, there are certain characteristics that make a good Graviera stand out: its hard natural rind, its compact mass with small holes, and its light to dark –depending on the milk used for its production– yellow color. Graviera cheese is molded into wheels of varying weight (5, 10 and up to 25 kilos) and shape, while each type has its own particular flavor determined by the fauna of the region it is produced. Spiciness depends on how long the cheese was left to mature; sweeter Gravieras have usually matured only for a short period of time, whereas extra mature cheeses are always spicier. Namely, sweet Graviera has been left to mature for at least 5 months, mature Graviera at least 7 months (spicier than the previous offering), while extra mature Graviera has been left to ripen for approximately 12 months (with an even spicier and full-rounded flavor).
Graviera is one of the richest cheeses in calcium, while it is also an excellent source of protein, phosphorous and magnesium. 100g of Graviera cheese contain approximately 370 calories, 30g of fat, 28g of protein and 100mg of calcium. In recent years, light Gravieras with less fat have also hit the market.

Graviera Agrafon PDO
Graviera Agrafon PDO is produced in the mountainous regions of Agrafa (Western Thessaly / Evritania) from sheep’s milk or in combination with goat’s milk. The percentage of goat’s milk must not exceed 30% of the total weight. The addition of goat’s milk makes Graviera Agrafon harder and spicier than other similar cheeses. Graviera Agrafon PDO has a 38% maximum humidity and a 40% fat content. It is a hard, round rind compact cheese, full of small round holes, yellow in color and has a rich aroma.
To produce this cheese, milk is coagulated at 34-36°C. The mixture is divided after 25-35 minutes. It is then warmed up to 48-52°C while constantly stirred and is then poured into molds and placed under pressure. A day later, the cheese is removed from the molds and is placed on wooden racks for two days. It is then placed in brine for 2 to 4 days.
The maturing of the cheese occurs in rooms at 12-15°C temperature and humidity of approximately 85%. During this stage, the surface of the cheese is salted repeatedly for 3 weeks, until it obtains a 2% content in salt. When the salting of the cheese is completed, it is transported in an area at 16-18°C, where it stays for a month and then is placed in booths with a temperature of 12-15°C and 90-95% humidity for the maturing to complete. The total time of maturation is 3-6 months. During the maturing process, a micro-flora develops on the surface, which contributes to the maturing and the development of the organoleptic characteristics of the cheese. The cheese is then covered in natural beeswax.
It is worth noting that Graviera Agrafon PDO is currently produced by only one dairy, Kissas Dairy, in the area and the entire yearly production, all 100 wheels of cheese, are exported mainly to France, Switzerland and Germany. According to Mr Dimitris Kissas, owner of said dairy, in the near future production is expected to reach 4,000 wheels of cheese a year, most of which will likely be exported as this particular cheese is of high value abroad. “In these countries, customers prefer quality cheeses. They are not daunted by our cheese’s rather strong flavor nor by its high price,” he explains.

Graviera Agrafon PDO at a glance

Graviera Kritis PDO
Graviera Kritis PDO is produced from sheep’s milk in the island of Crete. In certain cases, when goat’s milk is added, its percentage cannot exceed 20% of the total weight. It is a milk particularly rich in fat and caseins, ingredients that are maintained almost entirely during the transformation from milk to cheese. Its total maturation time is at least three months.
The milk used for the production of this cheese must come from animals that are allowed to graze freely in mountainous and semi-mountainous regions in Crete, where no pollutants such as insect repellents or pesticides can be found. As a result, its products can be characterized as organic. Sheep and goat farming in Crete is similar to that in the rest of the country. It consists of small native species that produce relatively small quantities of milk, that is however particularly rich in nutritional ingredients, especially fat and proteins. Manufacturing units are spread throughout the island, and the herds are moved during the winter months to the milder seaside regions.

For the production of Graviera Kritis PDO, the coagulation of milk occurs at 34-36°C. The curd is then divided after approximately 30 minutes. It is then warmed up to 50-52°C while constantly stirred and is then poured into molds and placed under pressure. The cheese is then transported to a room at 14-16°C and humidity of approximately 85%. A day later it is placed in brine for 2 to 5 days, depending on the size of the cheese. The maturing of the cheese occurs in booths with a temperature of 14-18°C and humidity of 85-90%. At this stage, the cheese is periodically upturned and is salted 10 times. During the maturing process, a micro-flora develops on the surface, which contributes to the maturing and the development of the sensory characteristics of the cheese. Total maturation time is at least 3 months.
As reported by Mr Marinos Kalogerakis, President of Bros Kalogeraki SA, one of the major Graviera producing companies in Crete, the key characteristic of Graviera Kritis and what makes it different from all other similar cheeses, is the high quality of the milk used, which comes from local sheep races. Exports are shipped to almost the entirety of European countries –from Germany to France, to the UK, to Austria, to Sweden, to Poland, to Romania, and Cyprus, to name a few– while Greek diaspora is integral to the proliferation of this particular Graviera across the world.

Graviera Kritis PDO at a glance

Graviera Naxou PDO
Graviera Naxou (of Naxos) cheese is produced in the island of Naxos, in the Cyclades. It is a cheese with rind, yellow color and compact mass with small holes. It is produced in round wheels from pasteurized cow milk and a mixture that includes a small percentage of sheep and goat milk, the total percentage of which does not exceed 20%. It is categorized as a hard table cheese with a pleasant flavor and light aroma. It has a 38% maximum humidity and a 40% minimum fat content.
For its production, the coagulation of the milks occurs at 36-37°C and lasts for 30-40 minutes. The curd is then divided into rice-sized grains and is warmed up to 50°C for approximately 30 minutes. At a constant temperature of 50°C, the cheese is allowed to “cook” for 60 minutes under constant stirring. The curd is then poured into molds covered with cloth and is placed under pressure for 3-4 hours. During this period the cloth is changed 3 to 4 times. After this stage, the cheese is placed in brine for 2-5 days, depending on the size of the wheel. The cheese is then removed from the brine, dried and allowed to mature for 90 days at approximately 15°C. 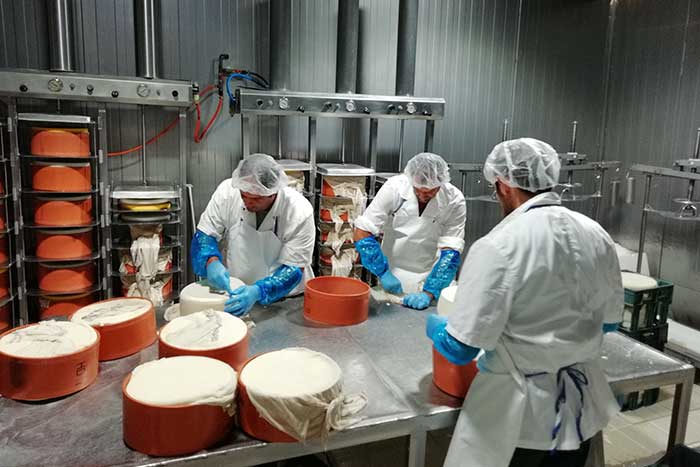 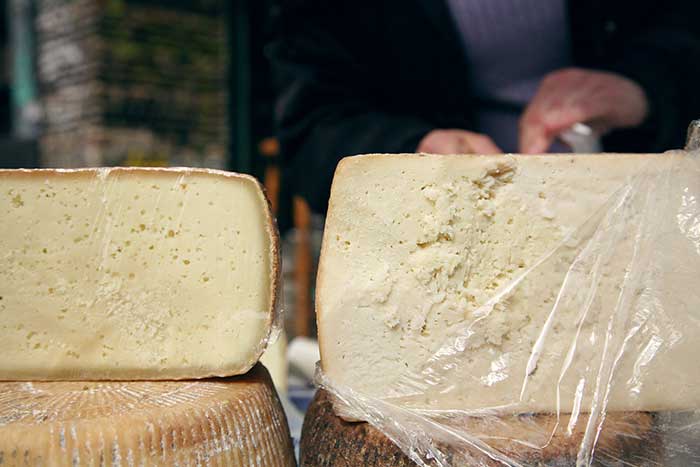 According to Mr Valeris, Vice-President of the Union of Agricultural Cooperatives of Naxos, Graviera Naxou PDO acquires even better organoleptic characteristics the more mature it gets, so the cheese is left to ripen on wooden racks for 5 months, instead. The Union, which is the major Graviera producer on the island of Naxos, has been experimenting with an extra mature Graviera Naxou PDO, which will go for sale in the near future.
Graviera Naxou PDO is the richest in calcium Greek cheese and is exported to countries in Central and Western Europe, as well as to the US and the UAE. Production amounts to 1,100 tons a year, while 30 tons of the cheese are exported, accounting for 270,000-300,000 euros. “Graviera Naxou PDO is a rather expensive cheese –and exports depend very much on price. Costs for the cheese are high: it is produced on an island, far from the mainland, while 11 kilos of milk only make 1 kilo of Graviera,” discloses Mr Valeris. “Interest is, however, growing. And we strongly believe that this new offering, the extra mature Graviera Naxou, will be a hit in Greece and abroad.”

Graviera Naxou PDO at a glance

Nitsiakos: €10 million investment within the next 5 years