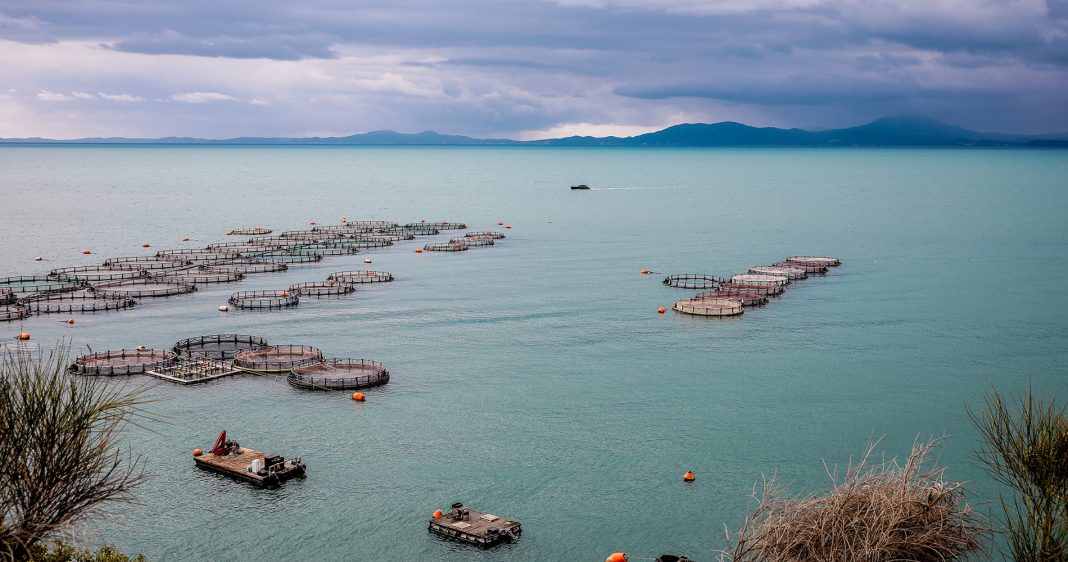 Innovation, safety, consistency, adherence to European specifications, and sustainability are key to the constant development of aquaculture in Greece. And following a major trademarking campaign, “Fish from Greece” is about to get even bigger.

The numbers don’t lie; with 125,772 tons of fish from aquaculture production for the year 2018, Greece stands as the number 3 fish farming producer in the world, and number 1 in the European Union. In fact, fish was the number 2 Greek export in 2018, while in 2019 sea bream and sea bass production is expected to reach 119,000 tons, which is 1.7% more than the previous year.
Fish farming in Greece represents 84.5% in terms of volume and 99% in terms of value of the total aquaculture production while mussel production stands for 15.5% and 1% respectively. Marine fish farming (mainly sea bass and sea bream) holds a dominant position, accounting almost for 82,5% of the volume and 96,3% of the value of the total aquaculture production in the country.

Currently, there are 320 fish farms operating all over Greece, most of which are family-owned and small and medium-sized enterprises. The main species produced are sea bream (55%) and sea bass (42%), while on a much smaller scale (3%) some other Mediterranean species are farmed. In 2018 the latter’s production reached 3,450 tons, which is 12.3% more than in 2017. Among the new species, meagre and pagrus hold the largest market share.
In 2018, the total production of sea bass and sea bream increased by 7% compared to the previous year, reaching 117,000 tons. Greek production represents 58% of the sea bass and sea bream farmed in the EU and 24% at global level.
Regarding the distribution of marine fish farms, 76.1% of them are in three Decentralized Administrations, where 80.6% of total production takes place (Peloponnese, Western Greece & the Ionian Islands; Thessaly & Central Greece; the Aegean). 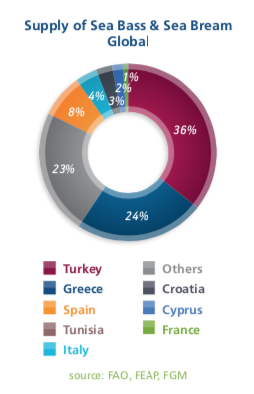 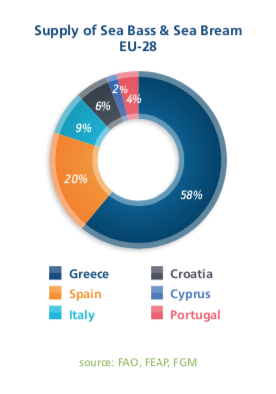 In terms of employment in aquaculture, Greece has one of the highest percentages in the European Union. Namely, the industry employs directly and indirectly approximately 12,000 persons (not only workers, but scientific, technical and managerial personnel as well). Most importantly, these jobs are created in remote coastal areas contributing significantly to the economic and social development of the local communities. Marine aquaculture (fish and mussels) accounts for 83% of employment in the sector, brackish water 10% and inland aquaculture for 7%. With regard to marine fish farming, the industry creates jobs in ten out of the thirteen Regions of Greece.

Organic aquaculture consists of approximately 800 tons which accounts for 0.7% of the total Greek harvest volume. However, it should be noted that only 530 tons of this production were sold as organic fish (0.75% of the total aquaculture production), while the rest were sold as non-organic. In terms of volume, production marginally increased from 735 tons in 2017 to 800 tons in 2018. In 2018, organic sales grew by 8.8%. Presently, there are two companies certified to produce organic fish in Greece and there are three private agencies providing such certification schemes for aquaculture. 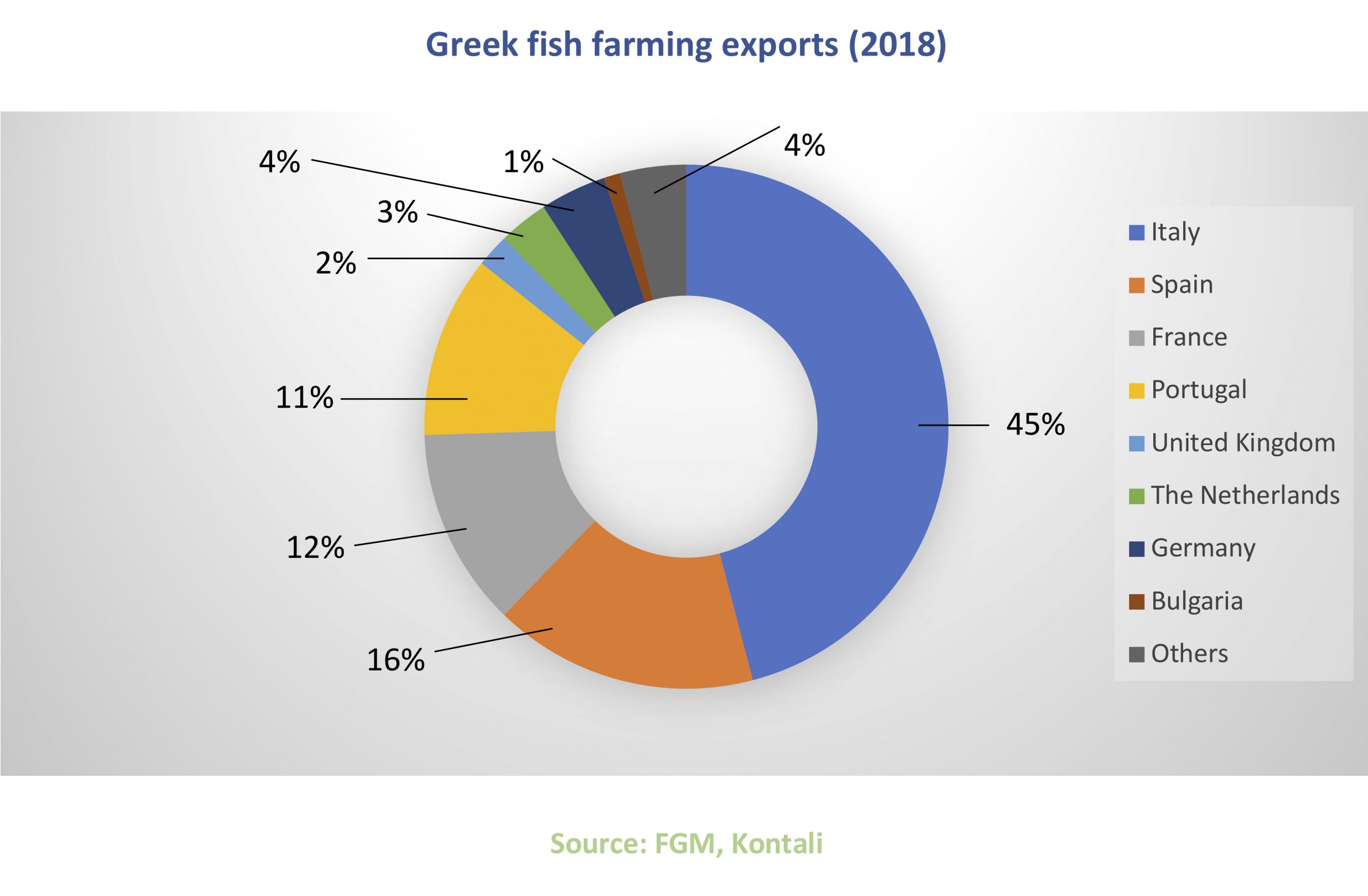 The Greek aquaculture industry is highly export-oriented as approximately 80% of production is exported, while the remaining 20% is sold in the domestic market. This trend was reaffirmed in 2018 as 72% of sales went to EU markets, 7% to third countries and 21% to the Greek market. Namely, Greek farmed fish was sold in 32 countries worldwide. By far the largest market for fish products from Greece is the EU and a smaller share is sold to North America and other third countries. The primary markets for the Greek fish are Italy, Spain, and France as 59% of Greek production was sold there in 2018. In 2018, sales were up 4% compared to the previous year. A total of 109,950 tons were sold, of which almost 79,610 tons in EU markets, 7,545 tons in third countries, and 22,795 tons in the Greek market.

80% of Greek aquaculture production exported to 32 countries
58% of EU sea bass & sea bream supply comes from Greece
125,772 tons fish from aquaculture production in 2018
62% of seafood harvested in Greece comes from aquaculture
67,000 tons of sea bream were produced in 2018
50,000 tons of sea bass were produced in 2018
2nd Greek export for 2018
24% of global sea bass & sea bream supply hails from Greece
12,000 persons employed directly and indirectly in fields related to Greek aquaculture

With the primary aim of fostering the growth of Greek aquaculture and of its Members, the privately owned nonprofit Hellenic Aquaculture Producers Organization (H.A.P.O.) was established in 2016, when the initial 21 Members agreed to combine their efforts and self-finance the creation of a national Greek identity for their products and their distribution to selected markets.
Today H.A.P.O. consists of 23 Members representing approximately 80% of Greek aquaculture. Parallel to a complex network of promotional activities, H.A.P.O. provides a wide range of active support in terms of collaboration, development, education, training, advice, problem-solving, networking, liaising with authorities and more.
The Organization’s mission is to differentiate the fresh Greek fish identified by the collective label Fish from Greece from fish farmed in other countries and especially Turkey and to secure their leading position in local and global markets.