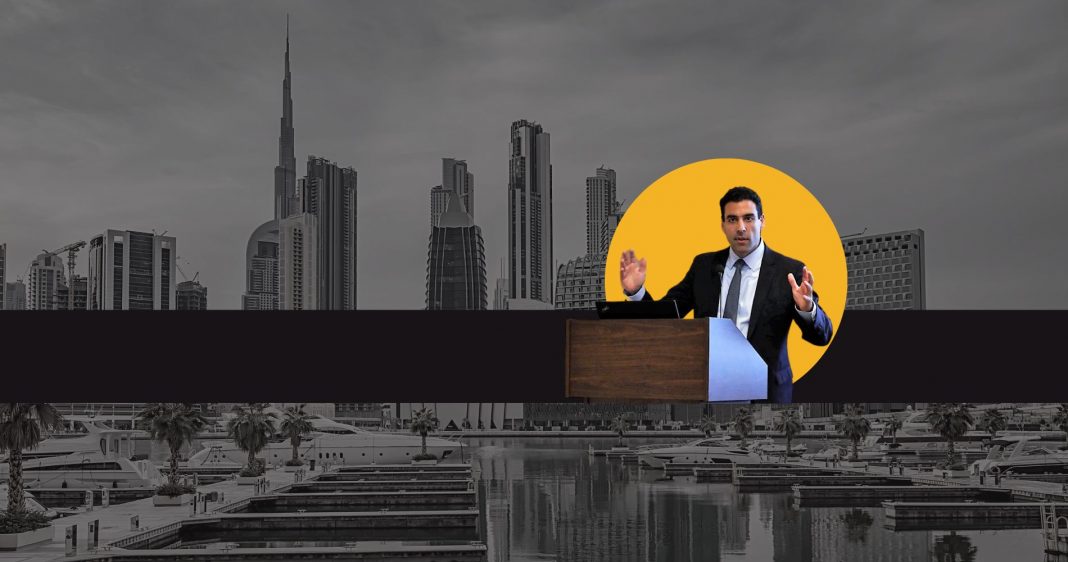 For an outsider, the UAE seems a very lucrative market to sell F&B products. With a growing population which stands currently at around 10 million, a high GDP per capita, thanks to oil production, and a flourishing inbound tourism industry with a high percentage of high-income tourists on the one hand, and the lack of a sizeable domestic production on the other, it looks as a no-brainer target market for F&B suppliers. Dimitris Thomopoulos, Acting Head of the Economic and Commercial Affairs (ECA) Office in Dubai of the Greek Embassy in the UAE, explains that, in reality, the UAE is a highly competitive market for F&B suppliers that presents opportunities but also poses challenges.

Let’s start with the positive aspects of the UAE food market. Where do the opportunities lie?
Well, the most obvious one is that due to the adverse climatic conditions, domestic  agricultural production is scarce. Local F&B production covers only a small fraction of domestic consumption, so the UAE depends by almost 80% on F&B imports to meet consumers’ needs. This ratio explains why food security is one the most important policy considerations of the UAE Government. To counteract this deficiency, the UAE has launched several initiatives to achieve food security. Domestically, the government introduced modern agricultural methods, such as vertical farming and precision agriculture and heavily supports the development of local F&B manufacturing and food storage facilities. Overseas, state companies invest strategically in agricultural land and animal husbandry in some Asian and African countries, but also in Europe (Romania, Serbia). In this vein, Emirati companies have invested in the last decade in the Greek milling industry and aquaculture.

Besides local demand, UAE has also succeeded in becoming a gateway for the supply of F&B products to the wider region. Tell us a bit more about this aspect.
This is true. A considerable percentage of imported food products are further re-exported to GCC countries, countries in Central Asia, the Indian subcontinent and Africa. The emergence of the UAE as a major re-exporting hub is primarily due to its strategic location, excellent transportation links and strong logistics infrastructure.
According to the latest available data, F&B imports in 2021 reached 17 bn USD and F&B re-exports accounted for almost ¼ of these imports in the UAE. The main F&B suppliers are countries from Europe, Americas and Asia which make up 80% of F&B imports.
UAE’s top F&B trading partner is India, followed by the US, Brazil, Australia, Canada and Saudi Arabia. Fruits and nuts account for the largest proportion of the UAE’s imports of F&B (13%), followed by meat (11%), dairy products (10%) and oilseeds (7%).
Greek F&B exports in the UAE oscillate during the last 5 years around 20-25 million euros per year, accounting for almost 9% of total Greek exports to the UAE and just a tiny share of the total F&B imports in the UAE. The UAE market is the third most important export market for Greek F&B in the Middle East, behind Saudi Arabia and Israel.
The mainly exported F&B products from Greece are fish, fruit (strawberries and kiwis), canned peaches, olive oil, olives, dairy products (cheese and yogurt) and pastries.
As an overall assessment, F&B export performance in the UAE follows the trail of our export performance in this country, characterised by a highly diversified range of products that are exported on a rather limited scale and on an inconsistent pattern.
The relatively low figures can be partly explained by the challenges that Greek exporters face in the UAE market. 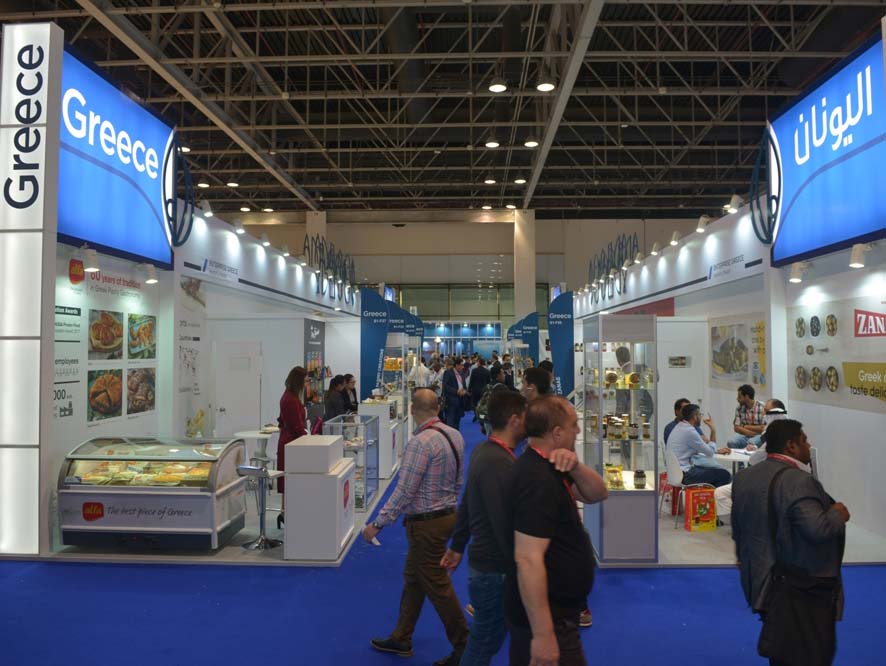 The Greek pavilion in Gulfood

What would you consider the biggest challenge for companies or brands who want to do business in the UAE?
Undoubtedly, the most important challenge is the highly competitive business environment.
Major supermarket chains import most of their products directly from overseas suppliers, but there are also importers that act as agents and distributors to multiple distribution channels. The importance of the big hypermarkets/supermarkets brands on the retail segment cannot be overstated. An estimated 85% market share is controlled by F&B retailers such as Carrefour, LULU, Choithram’s, COOP-Emirates, Spinney’s, Al Maya, Zoom etc. The remaining 15% is shared by convenience stores that mainly serve the immediate needs of the consumers. In Dubai in particular, the two large hyper-market chains Carrefour and Lulu have an estimated share of between 50% and 60%. Large supermarket chains select suppliers who are willing to invest in supporting their products by imposing listed fees at the points of sale.
Food suppliers from all over the world fiercely compete for market share, as the UAE is a trade hub for a large chunk of the world. Contrary to common misperceptions, market participants in the UAE (importers, distributors) are quite price-sensitive. The oriental penchant for tough bargaining, slower than expected decision-making and high freight rates due to the lack of a cargo flight between Greece and the UAE contribute also to a very tough environment for prospective exporters of F&B.
Having said that, it is not implied that the UAE market should be ignored. On the contrary, it presents a huge potential as it is an ideal entry point for the promising F&B markets of the wider region. Rising incomes and populations in these countries coupled with a high reliance on imports present considerable opportunities for Greek exporters. 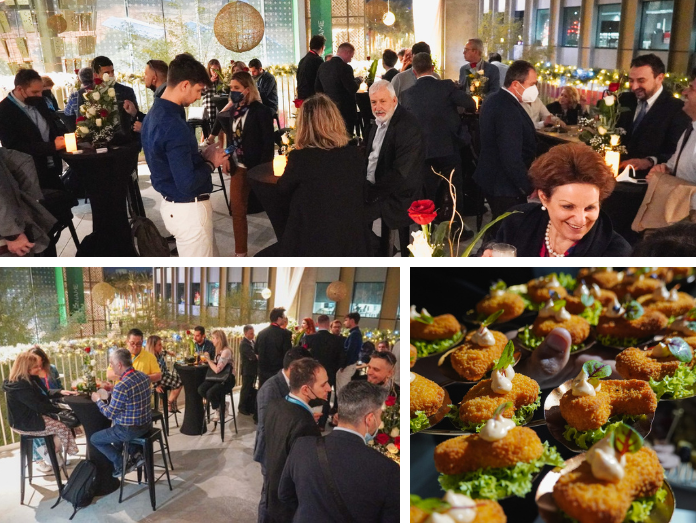 Snapshots from the Greek restaurant in Expo Dubai 2020

You obviously talk about adaptation of expectations to the market realities…Absolutely. There are some key things to be taken into consideration: First and foremost, building and maintaining relationships is instrumental in doing business in the UAE.  Participation in food exhibitions on a regular basis is a sign of commitment and consistency and an excellent opportunity to connect with prospective partners. The UAE is a regional hub for trade exhibitions, with Gulfood being one of the largest F&B exhibitions in the world. Enterprise Greece organises each year the National Pavilion of Greece with an average participation of 60 Greek companies in each edition.
Greek exporters can also take advantage of various EU-funded promotional activities organised in the UAE that focus on agricultural products. In the last couple of years, special promotional campaigns were launched for Greek fruit, juices, rice, poultry and wine. These campaigns proved very useful in familiarizing Greek producers with the business landscape in the UAE and local market participants with the high quality of the Greek produce.
Expo2020 Dubai offered also an excellent springboard for the promotion of Greek F&B. The Greek agricultural sector had been selected as one of the 8 strategic pillars of the Greek Pavilion at Expo and various F&B promotional events organised by Greek Regions were successfully held there.
It is no coincidence that the restaurant of the Greek Pavilion at ExpoDubai 2020 was one of the most visited at Expo, as the Greek cuisine is very popular among the local Emirati population. Currently, more than 20 Greek restaurants in Dubai and Abu Dhabi serve delicious Greek recipes to customers that many of them have fallen in love with Greek food during their summer vacation in Greece. It is worth noting that some of these restaurants are not owned by Greeks but hospitality groups that have ridden the trend. These outlets can serve as Greek F&B Ambassadors in the local market.
Regrettably, though, popularity of the Greek cuisine among the Emirati does not by any means imply that Greek food became a staple food in the UAE. Emiratis represent just over 10% of the UAE population. The expat community of Europeans and Americans is another 10% and the remaining 80% consists mainly of people from the Indian sub-continent, East Asia and Africa whose majority is low- to middle-income consumers, with a high propensity for consumption of food originating from their home countries.
Meanwhile, the COVID-19 pandemic brought about the meteoric increase in F&B retail e- and m-commerce. Mobile apps like Instashop, an online grocery delivery service founded by two Dubai-based Greeks, have become increasingly important sales channels for UAE F&B companies.
Lastly, the foodservice sector in the UAE should not be overlooked. Although for most F&B exporters, the jewel of the crown is the entry of their products in a multi-store supermarket chain, this achievement entails high entry costs and low margins. Sales on the HORECA channel offer, on the other hand, low entry costs, higher margins and a lesser need for brand development. Given the development of the HORECA industry in Dubai in particular, it would be unwise to underestimate the potential of this sector for Greek F&B products.
A few peculiarities of the UAE market also need to be considered. As a Muslim country, the import of pork and pork products is permitted, but is very strictly regulated and the market is limited to non-Muslim expat communities. The UAE is also a fast-growing halal food market. Imported meat, poultry products or products containing animal by-products must be Halal-certified by a UAE-approved certification centre in Greece. Alcoholic beverages are available in the UAE, but their import is restricted to a handful of licensed importers who are licensed to import wine and spirits.