Recently, the Institute of Export Research and Studies (ΙΕRS) established by the Greek Exporters Association (SEVE) prepared their annual “Mapping of Greece’s Export Activity by Region” study for the period 2015-2019, reaching to significant conclusions regarding the export performance of all Greek regions and regional units. In fact, SEVE is the only official body that processes and analyzes the data of trade in goods carried out by the 13 regions of the country and its 52 regional units.
According to the report, another record was added to the achievements of the Greek export community in 2019, as the country’s exports increased by 1.0%, ie €318.7 million compared to 2018, amounting to €33.4 billion. At the same time, the country’s export performance (exports of goods in GDP %) improved from 17.9% in 2018 to 18.2% in 2019.
Despite the record set in 2019, there is concern arises from the fact that the Regions of Central Macedonia, Epirus, Attica and Thessaly were the only ones showing increased exports, while the rest recorded decreasing numbers. 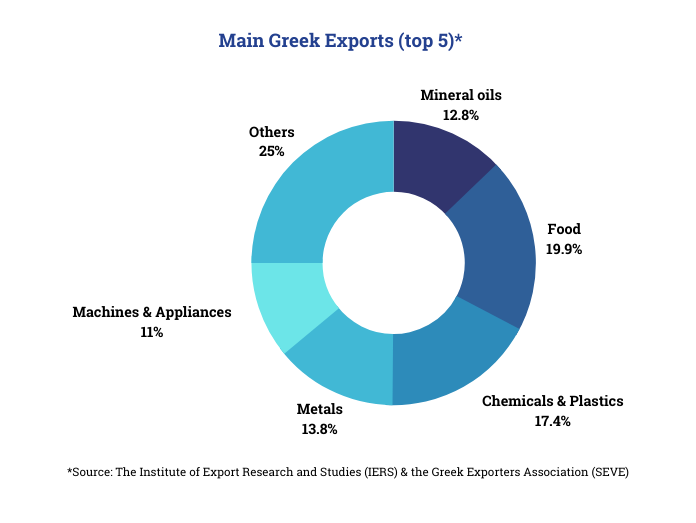 The Region of Attica maintained the largest share in Greek exports for 2019 with a 53.4% percentage. Namely, the exports of the Region increased by 5.9% amounting to €17.8 billion in 2019 compared to €16.8 billion in 2018, while imports had a similar course, amounting to €37.4 billion in 2019 and showing a 4.8% increase. Foodstuff accounts for 5.9% of the Region’s exports.
The Region of Central Macedonia climbed to 2nd place of Greek exports, surpassing the Region of the Peloponnese, as it recorded the largest increase in exports in 2018-2019 aka a 7.6% percentage. The Region of Central Macedonia exports 15.7% of Greek products, while, excluding mineral oil products, this percentage increases to 19.5%. A significant decrease (13.8%) was recorded in the exports of the Peloponnese in the period 2018-2019, resulting it to fall to 3rd place in the list. Mineral oils remained the most important exports sector with a 84.0% share, while Turkey was the most important export destination (20.6%).
The trading image of the Region of Thessaly is considered particularly positive. This region increased its exports by 4.7% and now holds a 4.2% share of Greek exports and a 6.2% share if one excludes mineral oils. Exports amounted to €1.4 billion in 2019, while imports to €782.5 million, resulting in an increased trade surplus by 10.8% amounting to €634.4 million. Food are in the first place regarding the Region’s exports with a 48.5% share. 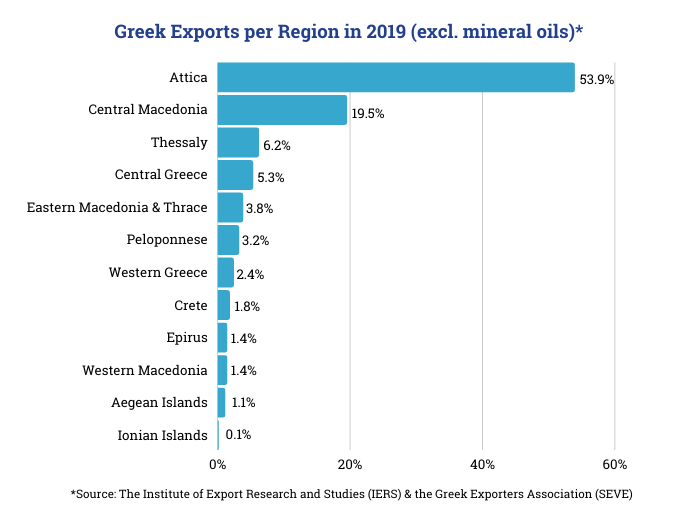 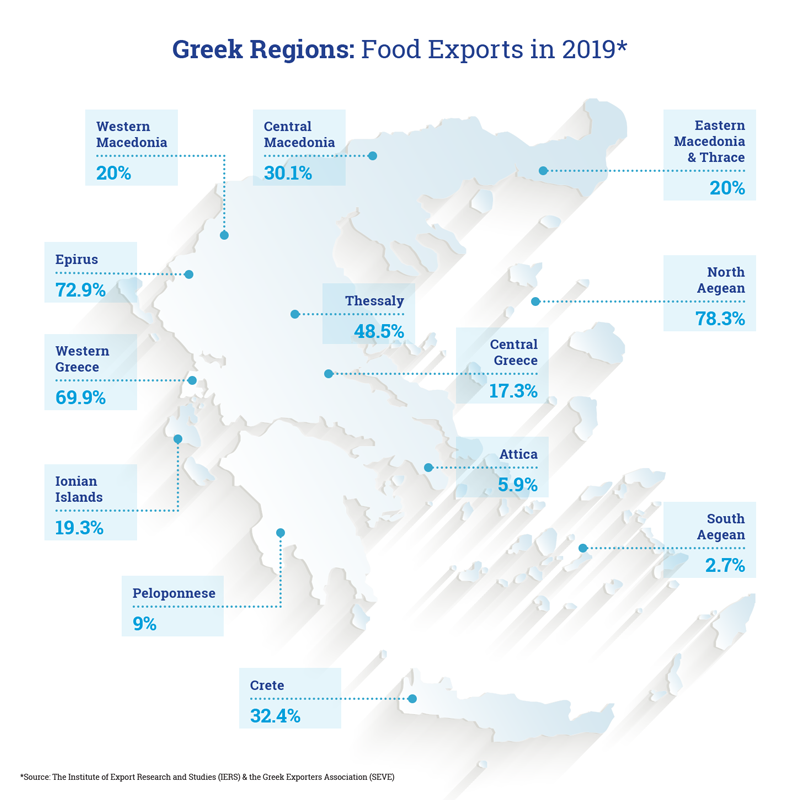 As far as sectors are concerned, mineral oil products constitute 32.0% of Greek exports, with 88% coming from the regions of Attica and the Peloponnese. Foodstuff, however, is in second place with 15.5%, while the Region of Central Macedonia has the largest share with 30.5% followed by Thessaly with 13.3%. In fact, Dr George Konstantopoulos, President of the Association, explained that one third of all exported Greek F&B comes from the Region of Central Macedonia and asserted that “Greek Food and Beverages are constantly gaining ground and are squeezing out products from other countries”. Namely, the Region of Central Macedonia’s export performance accounts for a 18.8% share (as a % of DDP) of Greek exports, with food accounting for 30.1%. The Region’s main export destination are N. Macedonia with 12.7%, Germany (9.6%), Bulgaria (8.5%), Italy (6.2%), and Turkey with 5.4%.

Nicky Giavroglou: “Our health starts with our diet”

Dimitra Tzika: “The Aegean Sea is our competitive advantage”

In Pies We Trust