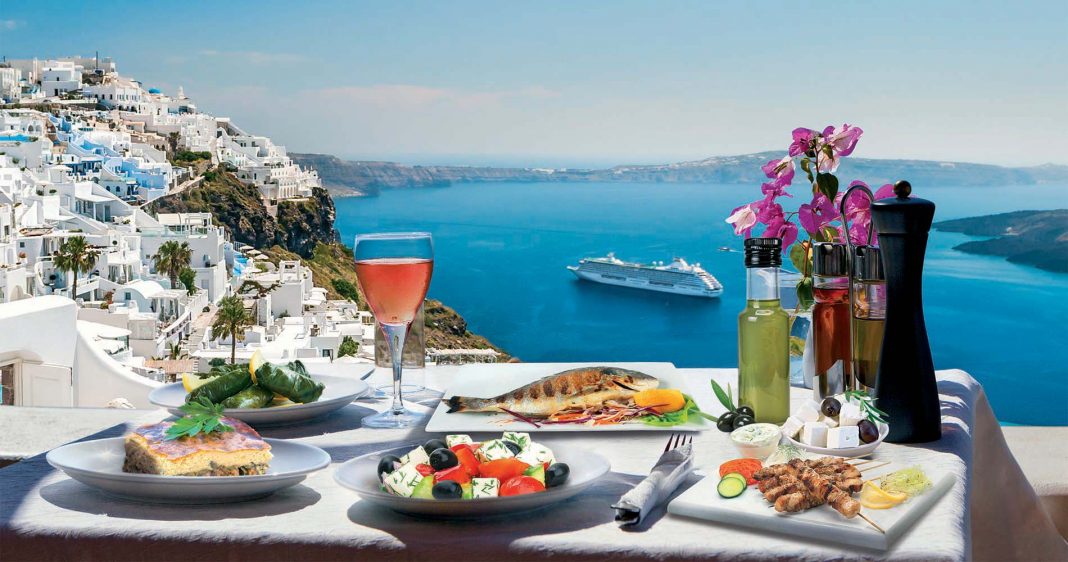 Greek Diet is a centuries-old eating lifestyle that offers countless health benefits, and forms the foundation of what is called the Mediterranean Diet.

Thanks to its unique climate, the Greek land produces goods of high gastronomic and nutritional value, and of a unique nature: Kozani red saffron, Messolonghi bottarga, Chios Mastiha, Feta cheese, etc. As a result, the Greek Diet is an expression of the way of life of the people of Greece, and is, therefore, a concept that goes far beyond food; it is woven into the pattern of everyday life, connected with their religious beliefs, their physical activity, and their cultural identity; it is a lifestyle based on tradition, sustainability and well-being, and a diet recognized as one of the healthiest in the world.
Adding to that, the recent economic crisis has become a unique business opportunity, since it has motivated a lot of young people to return to the Greek countryside and start small yet dynamic and innovative companies that produce culinary wonders.

When we talk about the Greek-Mediterranean cuisine today, people across the globe know what it’s all about.
Over the last few years, healthy food has dominated the international conversation, and restaurants as well as c-stores and delis all over the world have struggled to keep pace with passing culinary and dietary fads. In fact, according to recent surveys, Mediterranean and Greek are the top cuisines importers as well as retailers say are emerging in 2015!
So why has Greek food become suddenly so popular? Greek is kind of a next-step type of cuisine. Mediterranean and Greek menus are full of flavorful, healthy choices to satisfy both consumers and doctors advocating a well-balanced approach to eating.
With the consumers focused on authentic eating experiences, and ancient flavors taking center stage, this is the perfect time for the Greek-Mediterranean Diet to capture and keep the international spotlight. And things are beginning to turn a corner: even as Greek and Mediterranean concepts try to cross over into the mainstream and gain out-of-category success, more supermarkets, restaurants and stores are trying to incorporate Grecian touches to woo discerning customers. 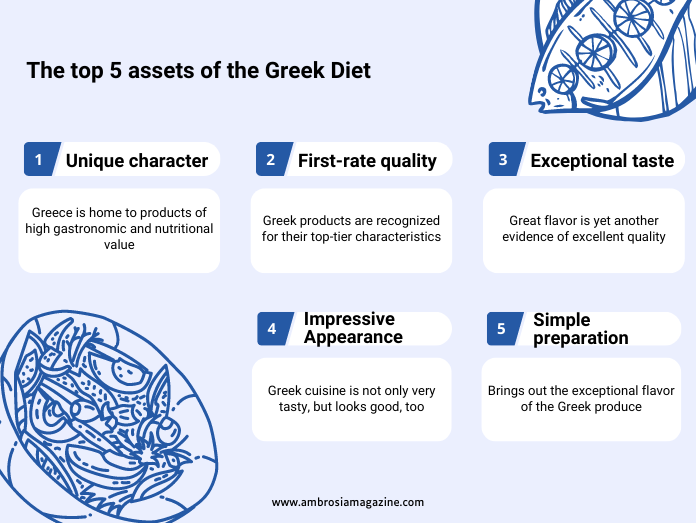 Unique products from a unique land

The Greek unspoiled nature with its uncommon landscapes and ideal climate, is a cauldron where pure forgotten flavors, rare delicacies, and unique products are mixing together to create a panorama of unprecedented culinary delights.
Small producers combine traditional processing methods with top-tier quality standards to revive millennia-long recipes tailored specifically to the needs and tastes of modern international consumers.
Greek products not only have exceptional flavors and aromas, but the implementation of high-end technologies in farming and manufacturing can nowadays ensure uniform, high quality at any given time.

Reaping the benefits of the Mediterranean Diet, the traditional Greek Diet is all about using the right nutritional ingredients in the right way.

Olive oil: Rich in vitamin E and antioxidants, olive oil is used almost exclusively in Greek cooking instead of butter, margarine and other fats.
Cheese: Greece has many nutritious and versatile  cheeses. The high-quality protein in cheese provides the body with all the essentials for strong muscles.
Fruit and vegetables: A high intake of fresh fruit and vegetables has been shown to protect against both heart disease and cancer, probably because of the antioxidants they contain. 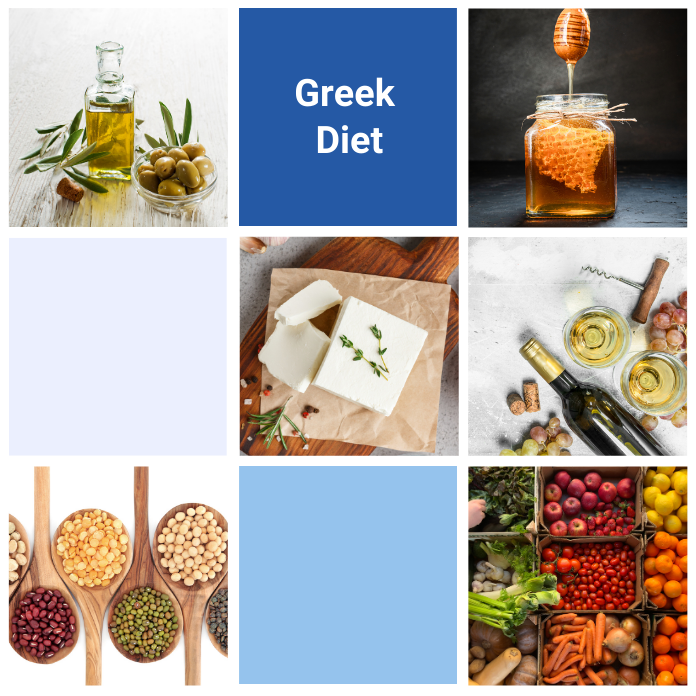 Honey: Honey contains glucose and fructose, but also myriads of natural compounds such as enzymes, amino acids, hydrogen peroxide, minerals, antioxidants, etc.
Wine: Throughout the Mediterranean wine is consumed in moderation and usually taken with meals. For men moderation is two glasses a day, and for women one glass a day.
Pulses: Pulses help prevent cancer, diabetes, and heart disease.They contain soluble and insoluble fibers that decrease cholesterol, control blood sugar levels, and help with digestion.

Greek Diet is a lifestyle choice. Here are some frequently asked questions that prove its superiority. 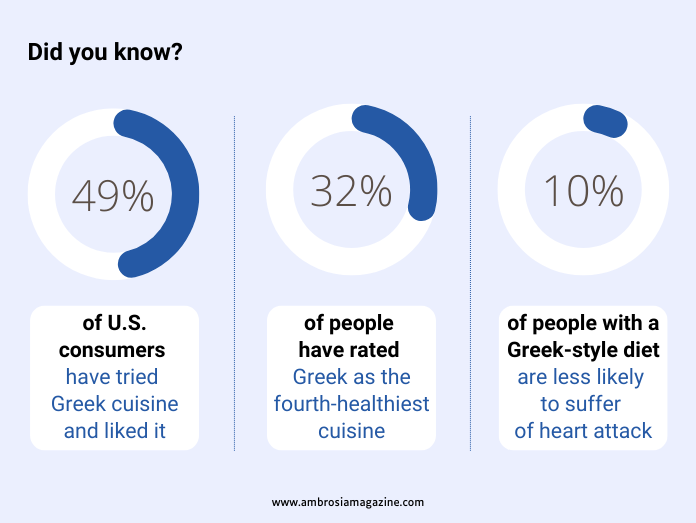 What is the Greek-Mediterranean food trend we hear about?
Foods from the Mediterranean rim have been growing in popularity since at least the mid-1990s, reinforced by the international appetite for flavors from Spain, Italy, and Greece. And no wonder, since it’s taken thousands of years and bottomless reserves of diligence, creativity, and determination for the people from southern Italy to southern France, from Morocco to Greece, and from Spain to Algeria to perfect the special blends of herbs, spices, and other ingredients that lend their nations’ cuisines such distinctive flavor profiles.
Having said that, Greek cuisine, in particular, has much to offer consumers, especially those looking to add to their dietary choices healthy options with plenty of flavor. That explains why restaurant chefs, food producers, and foodservice providers are constantly trying to find new ways to sustain excitement and adoption of the Greek lifestyle. To achieve that, they are serving up familiar Greek foods but elevating them in ways that excite the palate. In addition, they are looking beyond comfort food and traditional products, and exploring less-charted culinary landscapes.

Is Greek Diet the best diet, overall?
Let’s put it this way: Greek food and dietary patterns are a means to live a longer, healthier life. Not to mention that Greek Diet is easy to follow and delicious. What’s more important than that?

Eating habits and cognitive function
The results of a brand new study have revealed that long-term consumption of the Greek and Mediterranean Diet supplemented with either extra virgin olive oil or nuts, improved cognitive function in older adults. This is due to the increased intake of antioxidant and anti-inflammatory agents present in those dietary patterns.

Events for the promotion of Greek products in the UK, “Bites of Greece”