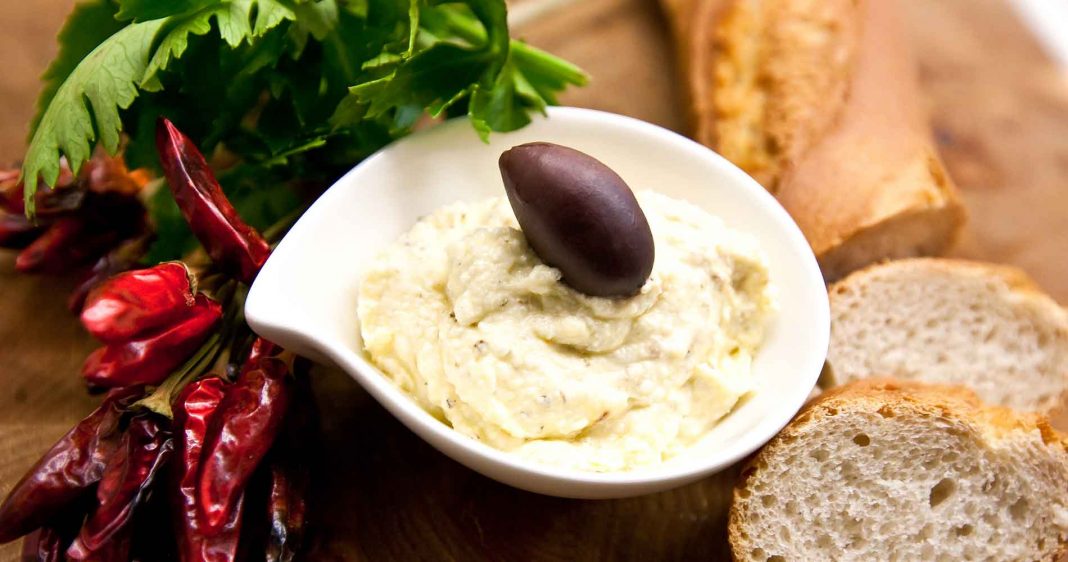 What is the most delicious Greek cheese? If you say Feta, then you’re missing out on some really tempting choices –especially in the soft cheese category. Take for instance Anevato, Katiki or Kopanisti, which are packed full of nutrients and flavor. Here are the PDO cheeses you should be familiar with.

With 23 cheeses in the EU geographical indications register (22 PDO and 1 PGI), Greece is one of the top producers of quality cheese. In fact, the country is currently in fourth place after Italy (60), France (56), and Spain (31).
Most of Greek cheeses, however, are generally unknown. Explore the country’s soft PDO offerings and find out what makes them unique.

Anevato (meaning something that rises) is produced in Grevena and Kozani, in Northern Greece, from sheep or goat’s milk or a combination of the two. It is a soft, grainy cheese, white in color, with pleasant taste and aroma, of no particular shape, without rind or holes, and is usually served with a spoon.
For its production, milk is stored at 18-22°C until it obtains an acidity of almost 35°C. It is then placed into cooling booths in 2-4°C, where it stays for 24 hours. Afterwards, the mixture is divided and allowed to remain in the cheese booth for another 12 hours. Finally, it is strained, salted, and allowed to mature for at least 2 months. 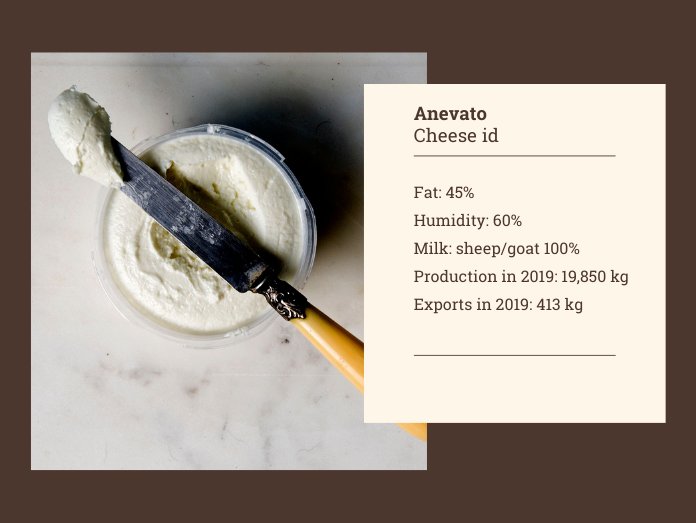 Galotyri cheese is one of the most ancient Greek cheeses and is produced in Epirus and Thessaly. It is a soft, creamy cheese, without rind, with a pleasant and fresh taste and aroma. It is consumed as a table cheese. For its production, milk is warmed up until it reaches boiling point. It is then poured into containers –preferably ceramic– where it stays for 24 hours. A small quantity of salt (3% to 4%) is added, and the mixture is left at room temperature for 2 days. During this period, it is stirred periodically, until sufficient acidity develops. It is then poured into textile or skin sacks or into wooden barrels. The sacks or barrels are closed air-tightly and stored for at least 2 months. 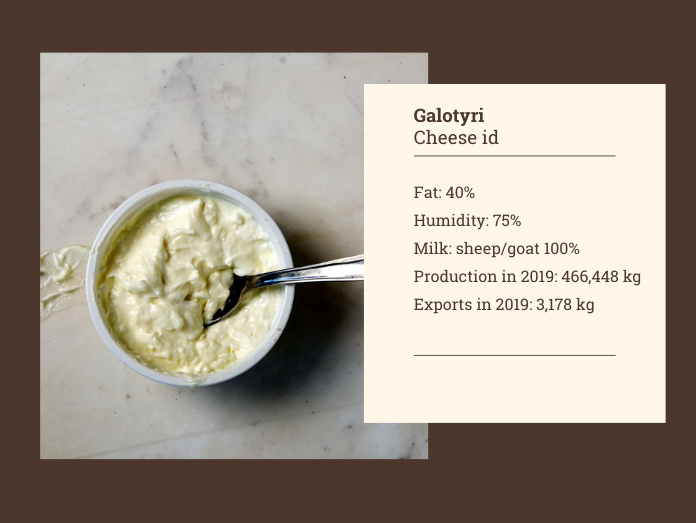 Katiki Domokou is traditionally produced in the Orthis plateau, in the region of Domokos, in Central Greece. It is a creamy white cheese, with a soft, slightly sour flavor and no rind. Milk used for its production comes exclusively from Domokos, from herds of sheep and goats traditionally raised and adapted to that region, whose diet is based on locally found plants.
For its production, the curd is packed in containers which are kept in cooling booths at less than 4°C until it is consumed. 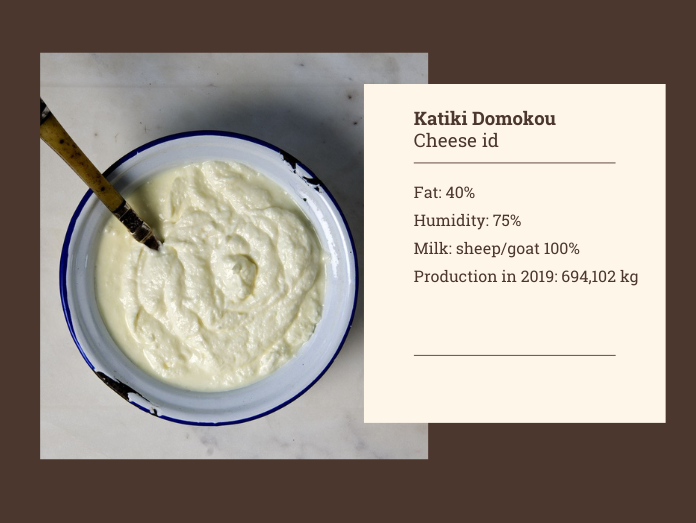 Kopanisti (something that has been beaten, in Greek) is produced in the islands of the Cyclades. In Kopanisti cheese, its name refers to its technique of preparation: the manufacturer works the cheese mixture by hands once every hour for the first 24 hours. Then the mixture is wrapped in cotton cloth and placed in a cooking pot with a stone placed on top of the cheese. This method helps the cheese to get rid of extra liquids. It remains in the cloth for a week to mature and let the fungus grow. It is then again mixed and put in containers (traditionally earthenware) to complete its aging process, which can take between one and two months. It has a strong salty and peppery taste, soft mass, and rich aroma. It is a creamy cheese, off-white in color, consumed as a table cheese or in cheese pies and as a starter with wine and ouzo. 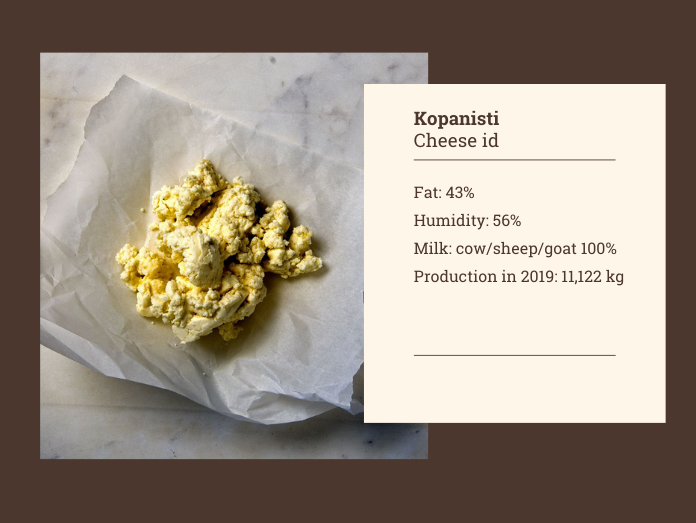 Manouri is a curd cheese produced in Thessaly, Central Macedonia, and Western Macedonia. It is produced from curd and fresh full-fat milk or even fresh cream. It is a soft, white cheese with a compact mass, without rind. It is found in various sizes and weights. It has a pleasant, sweet taste with a characteristic aroma.
For its production, both cheese-milk and cream are necessary. Manouri is transported into cloth sacks for draining. The draining process lasts for 4-5 hours. The cheese is then placed in cooling maintenance booths with a temperature of 4-5°C, where it stays until its consumption. 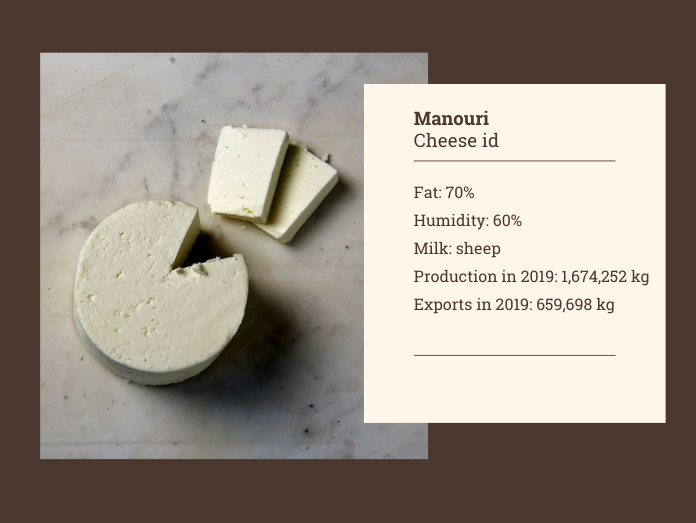 PDO Xygalo Siteias or Xigalo Siteias is a soft cheese produced in a small area located in the easternmost portion of the island of Crete, southeast of the city of Heraklion.
The raw milk, which is produced within the geographical area of this appellation, is pasteurized, and cooled. Then up to 2% salt is added to it, as well as small amounts of cultures and rennet, and the mixture is left to ferment for a period of 7 to 10 days. The excess fat and butter are skimmed off the top and the mixture is left to ripen at a temperature of 10-15°C for about a month. Once this process is complete, the cheese is separated from the whey and placed in food-grade casks. The product must be refrigerated at a temperature of less than 4°C. If unpasteurized milk is used, the refrigeration must last for a minimum of 2 months. 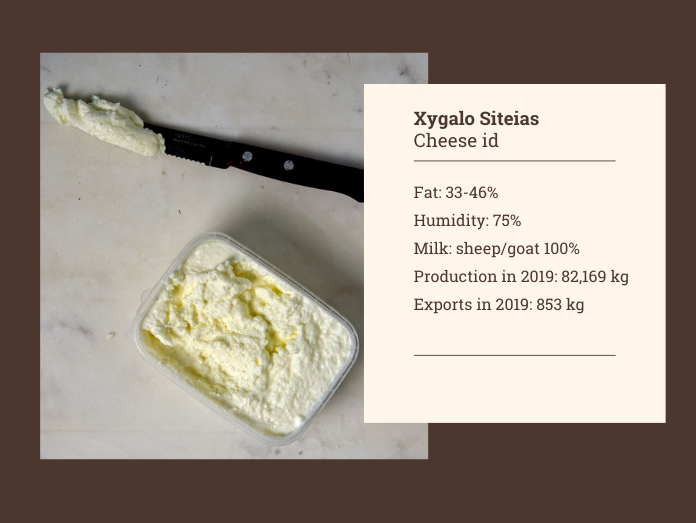 Xynomyzithra Kritis is a curd cheese produced in Crete. Milk used for its production comes exclusively from Crete, from herds of sheep and goats traditionally raised and adapted to the specific region, whose diet is based on locally found plants. It is a soft, creamy cheese with grains in its mass. It is white, shapeless and without any cuts or rind.
For its production, producers use curd; this is centrifuged to eliminate any grains and then warmed and constantly stirred for approximately 30 minutes. Α fat layer of curd forms on top of the cheese. This is allowed to rest for 30 minutes and is then transferred in molds and drained for 3 to 5 hours. After the draining process, 1.5-2% of salt is added carefully, to obtain a uniform consistency. The cheese is placed in cloth sacks and pressed for about a week. During this time its acidity increases. The pressed curd is then placed in barrels, where it remains for at least 2 months until it matures. During the maturation process, the barrels are placed upside down and the top is slightly loosened, so that any extra humidity is removed. 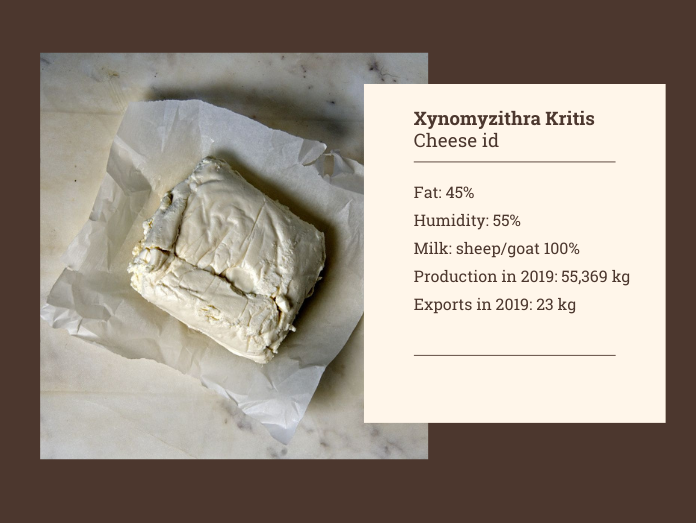 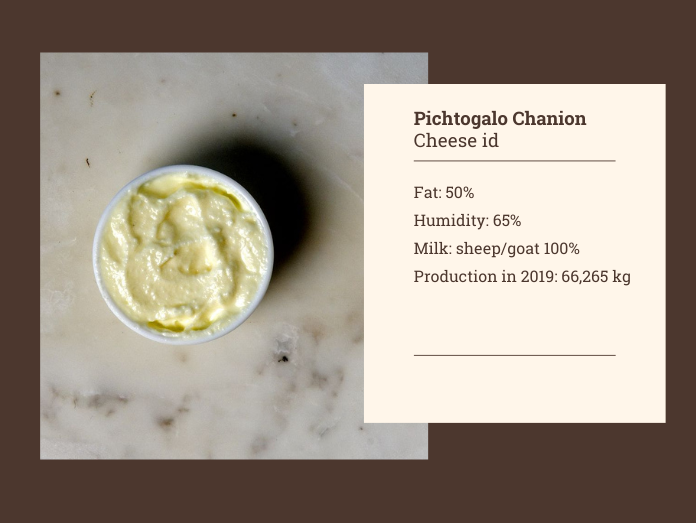