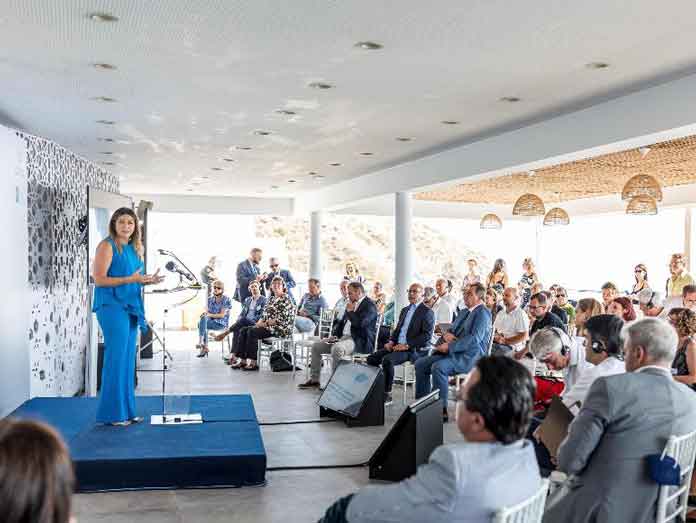 An event/conference organized by the Ministry of Tourism on Greek wine tourism, on July 5 and 6 in the island of Santorini, was successfully completed. During the two-day event, coordinated under the auspices of Deputy Minister Sophia Zacharaki, the participants visited three wineries on the island featuring the “Visiting Winery” label and had the opportunity to get to know the long history of Greek wine not to mention taste the excellent wine products.

The event concluded with a workshop on “Greek wine tourism: Strategies and perspectives for the post-Covid era”. The event was attended by both international and Greek institutional players on wine tourism, ambassadors of foreign countries with a special interest in Greek wine tourism (France, Germany, Cyprus, United Kingdom), wine and wine tourism experts, Greek producers, and experts, while it was covered by journalists from across the world.

The 2-day event highlighted the great potential for the development of wine tourism in Greece, building on the millennia-long Greek wine tradition, but also on the already numerous choices and authentic experiences offered by Greek wineries that can be visited. During the workshop, the Deputy Minister of Tourism, Ms Sophia Zacharaki, presented the Ministry’s initiatives regarding wine tourism. These initiatives include:
· The creation of the first digital portal for Greek wine tourism, which will be presented in its entirety in the near future;
· Carrying out a survey by the Ministry for the “Visitor Winery” label, the findings of which will be used to upgrade the product;
· Τhe establishment of a National Wine Tourism Council in order to achieve the maximum possible synergies between all Greek wine tourism stakeholders for its long-term development;
· Strengthening the international presence and extroversion of Greek wine tourism, by intensifying cooperation with international partners;
· The use of the Recovery Fund to invest in infrastructure and the promotion of agri-tourism and gastronomy tourism, based on the proposals already submitted and approved by the Ministry.

The vineyard of Santorini, a World Heritage Site

Moreover, the mayor of the island, Mr Antonis Sigalas, explained inter alia that the appointed municipal councillor of Thera, Mr Stavros Sigalas, has undertaken to coordinate the creation of a nomination file in order for the unique, volcanic vineyard of Santorini to be inscribed on the UNESCO World Heritage List.
This event is just the beginning of an itinerary for the promotion of Greek wine tourism that will continue through a series of Greek wine-producing regions, with the next stop being Western Macedonia.