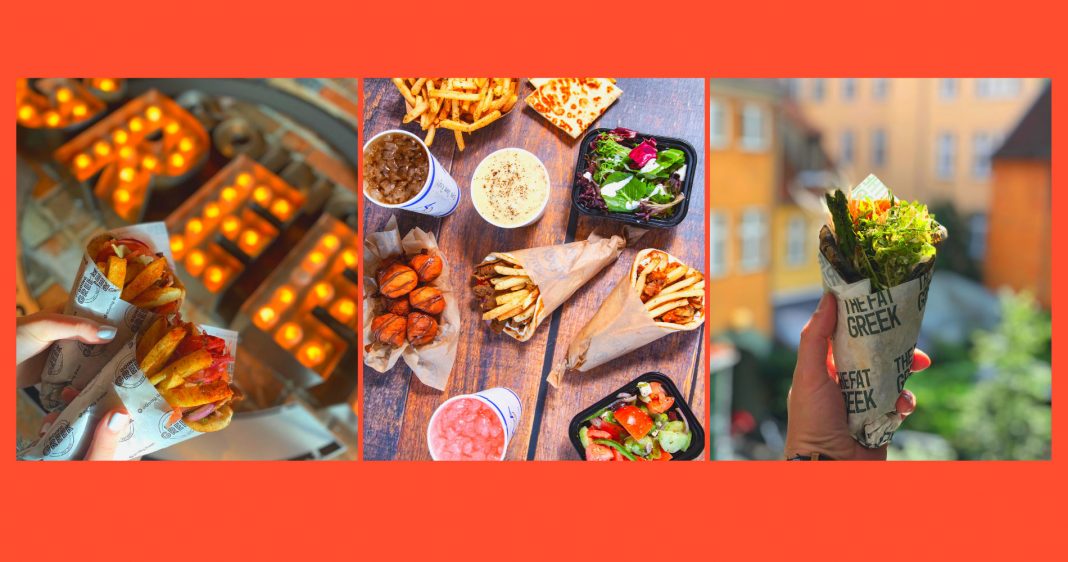 Gyros, one of the most delectable Greek street foods is also among the most popular ones at global level. Meet the people helping an international clientele get acquainted with authentic Greek flavors & breathing new life into an old classic.

From his business called “The Fat Greek” in Copenhagen’s Ryesgade street, chef Dimitris Kokkalidis proves that Greek street food can easily exist in one of the world’s toughest fine dining scenes. And he gets right to the very heart of it by offering plain and utterly delicious gyros. 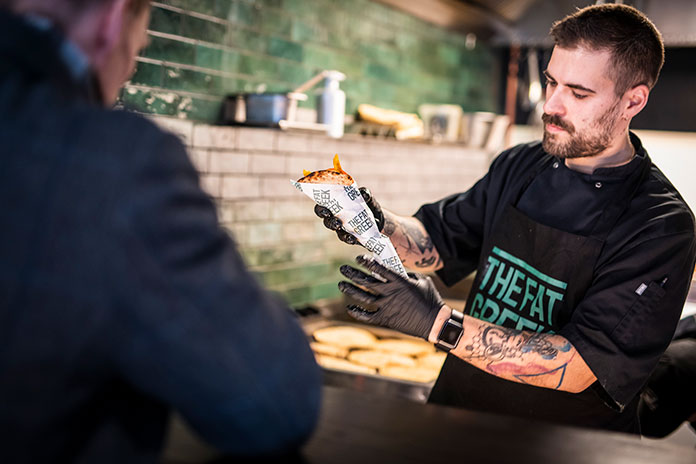 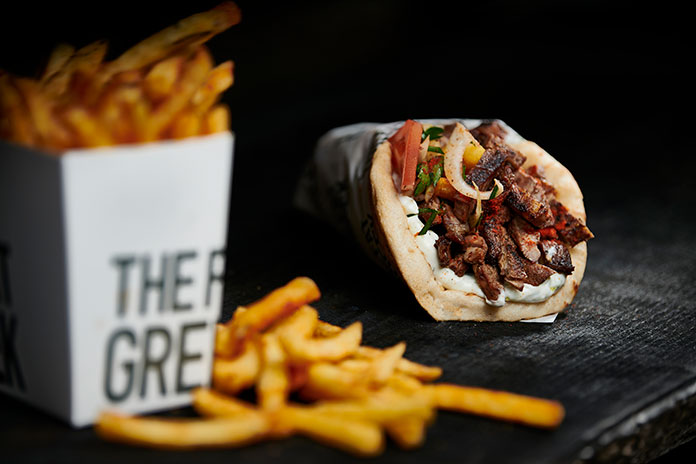 What made you create The Fat Greek and how do you see it developing in the future?
While talking to my associate a few years ago, he expressed his admiration and interest in Greek cuisine and Greek street food. In fact, I have yet to meet someone that does not like Greek food — especially if they have already been to the country. My partner is often in Greece on vacation and just loves souvlaki. So, in 2018, we decided to put our money where our mouth is and create something in Copenhagen. Our goal is to consolidate The Fat Greek in Denmark’s street food scene and —why not?— even beyond.

What do your customers think about gyros? Are they familiar with it and its taste or do you need to “educate” them?
We thought long and hard about how we would market gyros, since we didn’t want to get it mixed up with one of the other famous street foods in Europe, shawarma. This is why we finally decided to adopt the old, traditional way and slice the meat à la minute, without using any modern gyros equipment. As far as “education” is concerned, I don’t think people need any education. I can say that they got familiar with it rather quickly.

Do you think foreigners have a distorted image regarding Greek cuisine and especially dishes such as souvlaki and gyros?
Greeks have immigrated all across the world and have made Greek gastronomy and cuisine famous to the four corners of the globe. Gastronomy is, however, constantly evolving. I don’t really think that it was presented in a wrong way, however, today there are many young people, professionals, who have the opportunity to present to the world an even better side of the Greek cuisine. And from what I can tell, they are doing a great job!

In your opinion, is there a New Greek Cuisine?
In recent years, we tend to return to the flavors that bring us closer to our family, that help us retrieve memories. To me New Greek Cuisine is the next step in Greece’s traditional cuisine, with select, fine ingredients and using more advanced cooking methods. I believe that there is a new generation of chefs that has the know-how, the passion and the desire to elevate Greek cuisine. After my experience abroad, I think that the culinary level in Greece is really high and that some extra promotion would only do more good.

What does it mean to you serving Greek street food in Copenhagen, one of the food and fine dining capitals of the world?
From the moment I came to Denmark, I was surprised that there were no souvlaki joints whatsoever. What pleases me most is when customers want to find out more about the product and the Fat Greek concept in particular. I also enjoy the fact that street food gives you a direct contact with the customer —you can talk to them directly, you can help them choose, you can adjust your dish.
In recent years, street food has developed into a major international trend and people in Copenhagen are looking for it. I believe that in this city, there is a beautiful balance between street food and fine dining. I also believe there is room for every concept to grow.

Where do you source your ingredients from?
The main ingredients, such as pork or chicken, come from selected farms in Denmark. Other ingredients like olive oil, Feta cheese, yogurt, even oregano and fleur de sel, I source them from small producers all across Greece, from Crete, the Peloponnese and so on.

What is your favorite ingredient?
My favorite ingredient is by far the handmade pita bread we use at The Fat Greek, which we buy from a producer in the Peloponnese, in Greece. It reminds me of the pita I used to eat when I was a kid, and that was exactly why we chose it: to awaken memories from Greece. A challenging feat, which, nevertheless, according to the feedback we get, has been achieved!

Greek street food is a dime a dozen in the UK —or, at least, it used to be. Now, a new generation of entrepreneurs is updating and upgrading souvlaki and gyros to suit even the most demanding palates. To wit, “Going Greek” a four restaurant venture that has taken the British by storm. 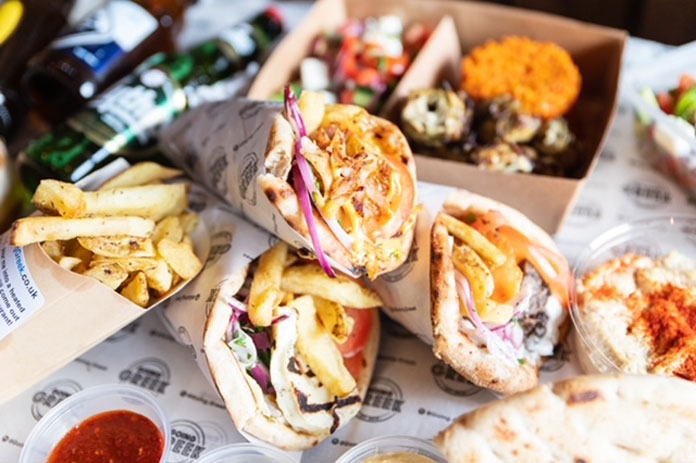 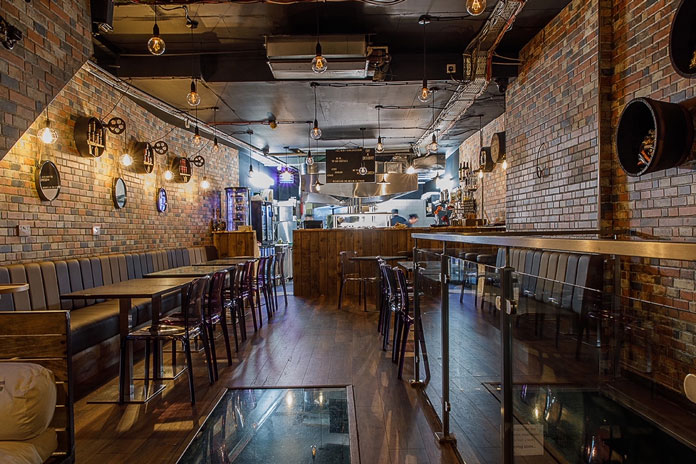 How did you decide to get into the street food scene with Going Greek?
Greek food in London got left behind and never really kept up with the changing times. Two years ago we decided to change the Greek street food scene!

It seems that Going Greek has been a resounding success —you now have 4 locations. Where do you attribute your success and how do you see it develop in the future?
Good food and good customer service is only the beginning. Our incredible staff and the fantastic support from our lovely customers ensures we always stay one step ahead of the game.
We certainly see the take away market expanding over the next few years but in terms of the Greek cuisine, you will have to watch the space as we have some incredible ideas coming soon.

What do your customers think about gyros? Are they familiar with it and its taste or do you need to “educate” them?
Many customers have experienced gyros whilst on holiday whereas others have heard about it through friends. One thing everyone agrees on however is that our gyros dishes are even better than the ones in Greece.

Do you consider gyros and Greek street food, in general, a growing global trend? If so, how can businesses like Going Greek capitalize on it?
It’s certainly a growing global trend which we see continuing. This industry is very easy to get into and many people think it’s easy to do, however keeping the business open and maintaining high standards is the real key to success.

What makes gyros special?
Gyros in our opinion is special because it contains a little of your favourite ingredients (meat/chips/sauce/salad) all in a wrap which you can enjoy sitting at a table or on the go!

Where do you source your ingredients?
Our specialist products (like the pitta for example) are sourced from Greece whereas a lot of the fresh vegetables/potatoes are locally sourced.

How has COVID-19 affected your business?
Luckily for us, we managed to adapt to the necessary requirements put in place, meaning we have been able to expand during this very challenging time.

After realizing that the lack of truly authentic Greek gyros in California offered a major window of opportunity, the birth of “Apola Greek Grill” was somewhat of a one way street. And its success —based on top-tier ingredients and traditional recipes— was almost inevitable. 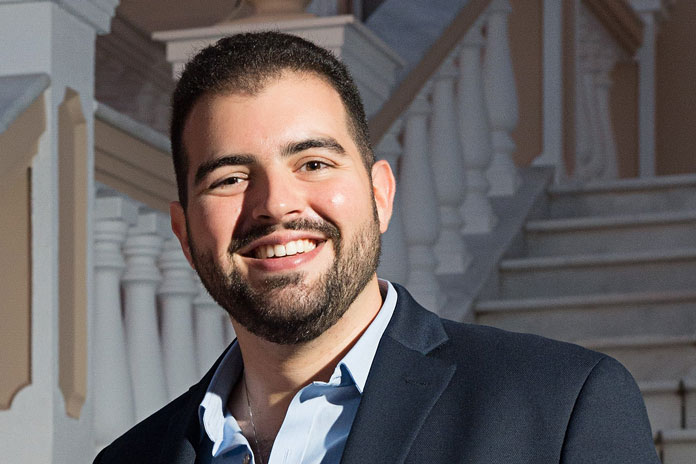 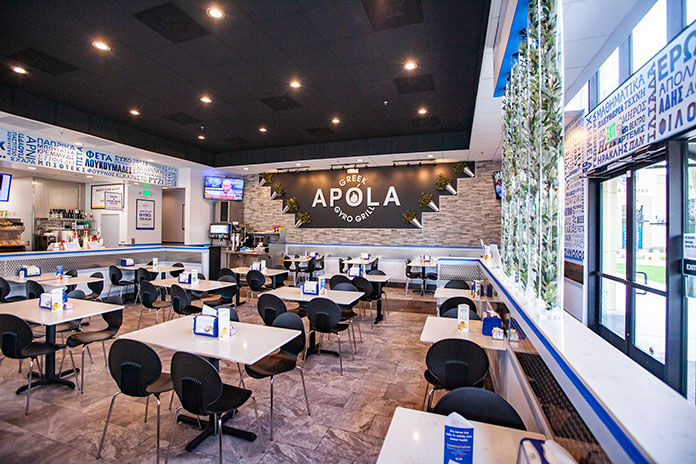 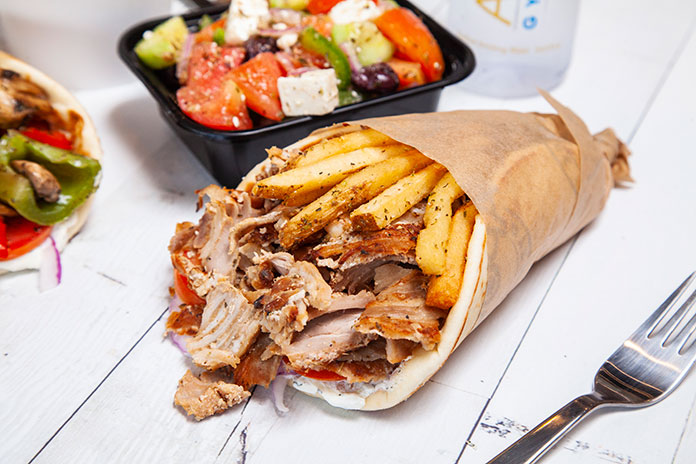 How did the people of California react to the dishes served Apola Greek Grill? Did they know about gyros and souvlaki?
One of the largest struggles we still have is “training” our customers as to what a true Greek gyros is. For decades, the US has been presenting the lamb or beef doner as gyros. It’s been a constant battle to explain to people that the truly authentic gyros is hand-stacked pork and hand-stacked chicken. Through Social Media and conversations with guests, along with reviews from Greeks stating “FINALLY A TRUE GREEK GYRO”, we have managed to start educating people in California about how a true gyros should look. That being said, we still get the occasional question of “what’s with the fries in the sandwich?”. At that point we have to still explain that in Greece, gyros comes with fries in the sandwich… Some people love the fries, some people hate it —but they can always order it without. Overall the response has been great. We’ve been voted as the best Greek restaurant a few times, we’ve been on a local TV show and have had a few articles written about us. All this has been thanks to the authenticity and uniqueness of our product. We’ve even had a celebrity chef review our food on social media!

Where do you get the Greek ingredients from? Like “pita” and gyros meat? Are there any Greek suppliers that you trust?
There are a few large companies in the US that supply some Greek and some not-so-Greek products, but the main help and support we’ve received was from Vitco Foods. Vitco Foods is a fast growing Greek-owned broadline supplier and they were willing since the beginning to bring in several items for us. Vitco Foods also brings in our proteins from Megas Yeeros who is the largest manufacturer of gyro in Greece. We were able to reach an agreement with Megas Yeeros for them to supply us with their highest quality line of products and also get an exclusivity on them, as well as our own recipes.

Do you believe that Greek cuisine is still among the most under-represented in the fast casual segment and overall in the restaurant industry in the U.S.?
By far! There have been several brands throughout the years that have attempted to fill that void, but unfortunately none of them have managed to do so successfully and authentically. There are a couple brands even right now, larger brands than we are, but they do not offer a truly authentic gyros experience.

Do you believe that gyros and souvlaki are global trends at the moment?
Gyros and pita sandwiches are becoming more and more popular and with several variations to them as well but we refrain from calling it a trend as trends tend to come and go. We see this as slowly becoming a permanent staple and craving in the US market —not just a trend.

How has the COVID-19 pandemic affected your sales?
We have felt the effect of COVID across all our brands. The effect though comes from the demographics of each location rather than the brands itself. Our restaurants that are located in areas that have more day time traffic (commercial areas surrounded by offices, industrial parks etc) have been affected the most since more and more people are working remotely now, whereas the ones located in more residential areas continue to have steady and even increasing sales.