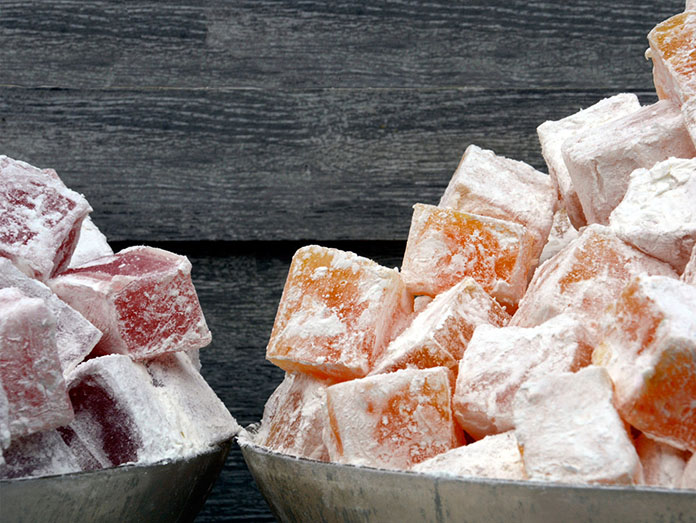 The Syros loukoumi, this sweet, delicious treat that resembles its “cousin” the Turkish delight, but has been inexorably linked to Greece and the Cycladic island of Syros, in particular, has just recently become part of UNESCO’s Intangible Cultural Heritage of Greece.
According to Ms Dina Sikoutris-Andriomenou, third generation of the Sikoutris family loukoumi workshop in Syros and representative of the island’s loukoumi producers, the decision to register loukoumi on the prestigious list has been a long time coming. Her contribution was crucial to the inclusion of the product in the Intangible Cultural Heritage of Greece list. The data Ms Sikourtis provided is drawn from historical records, old books, but also from active and retired colleagues from the island.
The press release of the registration states that “according to records, the Syros loukoumi, during its history, dating from 1832 aka the earliest possible evidence of its manufacture on the island, constitutes a registered trademark of Syros, as the island’s name is inextricably linked to this product and vice versa. Loukoumi is a local product that has been produced continuously since the first day of its production in Syros island.”
UNESCO established its Lists of Intangible Cultural Heritage with the aim of ensuring better protection of important cultural heritages all across the world, while raising awareness of their significance. In fact, as regards to Greece, highlighting the country’s culinary cultural heritage is one of the priority objectives.

Loukoumi production is simple –three main ingredients are involved: water, sugar and starch– but tricky. Like all traditional crafts it requires expertise, especially during the boiling and mixing stage. Ingredients boil in large copper cauldrons and once thickened, aromatics like bergamot, mastic, rose, honey, natural coloring and nuts are added, depending on the recipe. When the mixture is ready, it is poured into wooden molds lined with flour and the mixture stays there for a day, or a day and a half on humid days, until it sets. Then the loukoumi maker will place the large slabs onto a surface dusted with a good amount of powdered sugar and cut them into various sizes. Most producers from Syros don’t use any glucose syrup, dextrose or gelatin and artificial flavorings. 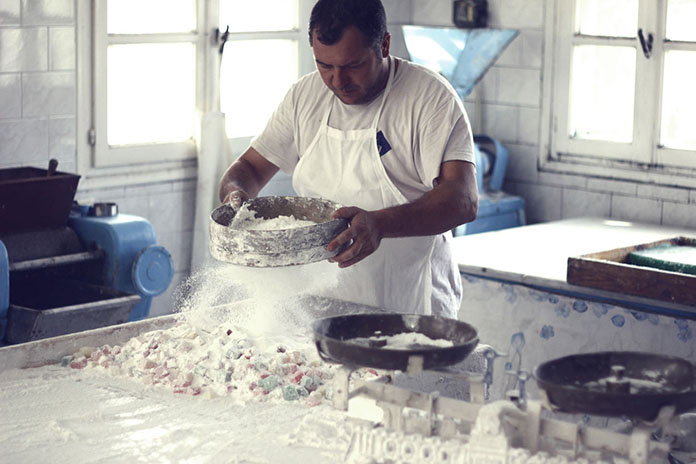 Of the origins of loukoumi

Loukoumi traveled from Ottoman Istanbul to Greece sometime in the early 19th century and very quickly became an important part of the Greek culture – gastronomic and otherwise. Although produced all over the country, the most famous loukoumi are undoubtedly those from the island of Syros, the capital of the Cyclades. In fact, this particular loukoumi is said to originate from Asia Minor and the secrets of its delicious preparation were transported by refugees from the island of Chios during their relocation to Syros around 1824, during the Greek War of Independence.
These refugees brought with them not only the recipe for this tasty sweet treat, but also the flavors of their home, i.e. loukoumi flavored with mastic and rosewater, although it is said that that the superior taste of Syros’ loukoumi is partly due to the natural, brackish water sourced from the island’s mountainous areas.
The first mention of loukoumi production on Syros dates to 1832, and gradually some 30 workshops were established. Loukoumi was the one of the first exports of the newly minted Greek state, and loukoumi from Syros quickly found its way into royal houses all over Europe and even Japan! At the beginning of the 20th century, Syros was exporting around seven to eight tons of loukoumi annually.
Loukoumi, however, never became a luxury item. They were often included in the lunch pails of workers. To this day, they play an important role in weddings, funerals and memorial services on the island of Syros.