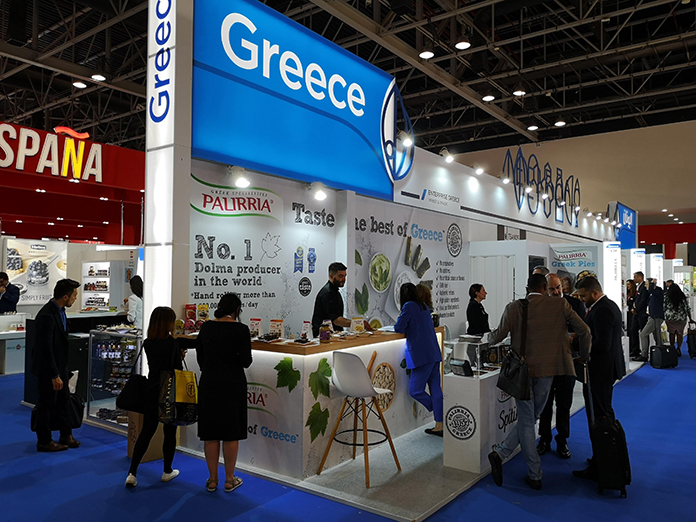 Gulfood, one of the world’s largest annual Food and Beverage trade shows, marked its silver anniversary this year by uniting food businesses from six continents to rethink their output in an age of major innovation and evolution across the global F&B sector.
With more than 98,000 visitors from 182 countries, 5,000 exhibitors and 1 million square feet of exhibition surface, Gulfood, which ran from February 16-20, 2020 at the Dubai World Trade Centre, consolidated its reputation as an important access platform in developing relations with partners and distributors, while building on its 25-year legacy as an on-point trend tracker and springboard for introducing new products and food solutions in the Middle East and North Africa region.

Greek exhibitors from the entirety of the F&B sector

78 Greek businesses participated at Gulfood 2020, with 75 of them exhibiting under the umbrella of Enterprise Greece, the official agency of the Greek State and under the auspices of the Ministry of Foreign Affairs, which promotes investment in Greece, exports from Greece, and makes Greece more attractive as an international business partner.
The Greek pavilion, sponsored by Enterprise Greece, hosted these extravert companies under one roof and helped them hold more than 10,000 significant B2B meetings during the five days of the trade show.
Businesses participating with the support of the Epirus and Central Greece Regions, as well as table olive companies participating through the European Promotion Program “Olive You” also had a strong presence at the fair. In addition, the “European Rice – Rice to the Top” promotional program implemented by the Agricultural Business Partnership of Thessaloniki, also had a significant presence.
During the fair, Greek exhibitors had the chance to promote quality Greek foodstuff to the thousands of visitors from all over the world crossing Gulfood’s doorstep, while striking new paths for Greek exports to markets of over 500 million consumers.

Enterprise Greece and eBay announce phase II of their partnership