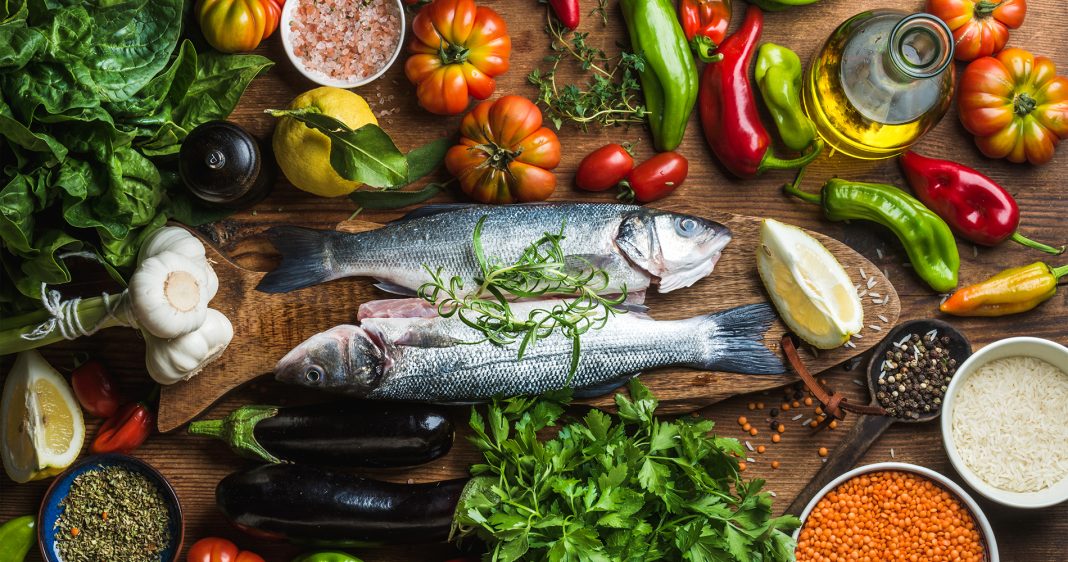 Forget elaborate diet plans. A new study published in the British Medical Journal concluded that the world-famous Mediterranean diet is indeed the most effective for long-term weight loss, not to mention for reducing the risk of heart disease.

A new analysis of 121 diet studies, examining the diets of over 21,000 people, found evidence to support something many experts have been saying for years: that strict diets don’t work in the long-term. In the paper, published in the British Medical Journal, the authors deduced that many of the 14 diets they examined resulted in improved blood pressure and an average weight loss of approximately 4.5 kilos at six months. But after a year of starting the diet, most of those weight loss benefits were gone and their lowered heart disease risk was back to where it had been. Except for those subjects following the Mediterranean diet.
Some 69% of the 21,942 participants were women, with an average age of 49, with diets that lasted about six and a half months. Many of their diets were branded, like Weight Watchers or Atkins, while others were trend-based, like low fat or paleo diets.
Co-author of the study, Gordon Guyatt, a professor of epidemiology and biostatistics at Canada’s McMaster University explained that, “Weight management and reducing your cardiovascular disease risk are important health factors. Most diets lead to short-term weight loss and important cardiovascular benefits, but those benefits largely disappear by 12 months. Although weight-loss was diminished, the Mediterranean diet maintained some cardiovascular benefits at 12 months.”
He added, “A number of studies report potential health benefits with a Mediterranean-style diet. The diet is known for its focus on olive oil, fruit, nuts, vegetables, legumes and whole grains. It allows for a moderate intake of fish and poultry and recommends a low intake of dairy products, red meat, processed meats, and sweets.”
It is worth noting that, earlier this year the Mediterranean diet was named as the best overall eating plan for the third consecutive year by a panel of nutritionists, diabetes specialists, heart health and weight loss experts in the US News & World Report’s annual list of top diets.

What the experts say about Mediterranean diet

Dr. Stefanos Kales, Associate Professor at Harvard Medical School and the Harvard TH Chan School of Public Health, weighs in at unique profile and the benefits of the Mediterranean diet.

What is the Mediterranean Diet?
Varying, yet similar diets have been consumed for millennia throughout the Mediterranean basin, wherever olive trees grew or could be cultivated, and thus, olive oil produced. In its modern form, the Mediterranean diet is most closely associated with the traditional dietary patterns of rural Greece and Southern Italy during the 1960s. At that time, it was first formally described by the pioneering American scientist, Ancel Keys who observed that Mediterranean eating was associated with lower risks of heart disease and longer lifespans compared to typical US and Northern European diets. The Mediterranean eating pattern is typified first and foremost by olive oil, which is used generously for most food preparation/cooking and is consumed as the primary dietary fat. Second, the Mediterranean diet involves a high intake of diverse plant foods, including olives and olive oil, fruit, vegetables, legumes (e.g. lentils and beans), unrefined (wholegrain) cereals, nuts, and seeds. The consumption of fish, seafood, fermented dairy products (yogurt and cheese), poultry, and eggs is moderate. Wine is commonly taken in moderation with meals, while the consumption of red meats, processed meats and sweets is far lower than in Western diets.
Because traditional Greek eating emphasizes limited consumption, rather than abstention from red meat and sweets, and permits moderate alcohol use, it represents a healthy, satisfying and appealing lifestyle that can be followed over the long-term.

What is the science behind the Mediterranean Diet?
Ever since Ancel Keys’ studies, a large number of observational and controlled epidemiologic investigations and clinical trials have documented great benefits from the Mediterranean diet. Overall, the data show consistent beneficial relationships between the Mediterranean diet pattern as a whole (as well as the increased consumption of certain essential Mediterranean foods alone (olive oil, nuts, fish, fruits and vegetables, legumes, fiber/whole grains, and moderate consumption of alcohol). These benefits include: greater longevity, reduced risk of heart and vascular disease, as well as lower risks of cancer, chronic degenerative diseases, and cognitive decline, including dementia. To be more specific, the list includes lower risks of weight gain, diabetes, metabolic syndrome, while offering improved sleep, sexual function and better quality of life. Recently, the Spanish PREDIMED study (Prevencion con Dieta Mediterranea), a randomized clinical trial, convincingly demonstrated for the first time that a Mediterranean diet supplemented with either extra virgin olive oil or nuts and followed for an average of 5 years was effective in the primary prevention of cardiovascular disease among high risk individuals. Also, PREDIMED has already shown many of the other benefits described above regarding breast cancer, cognitive issues and diabetes to name just a few. The evidence is so strong that the latest United States official nutritional guidelines now formally recognize and recommend the Mediterranean diet as one of three healthy options for Americans to follow.

So is the Mediterranean Diet the best diet, overall?
I am going to say yes and admit that I have some bias, but I think that both science and common sense make this a very defendable answer. First, compared to most medicines, supplements and popular diets sold and promoted on TV and elsewhere, the Mediterranean diet has a solid safety record of several thousand years. As we discussed earlier, 50 to 60 years of modern research including randomized controlled trials such as the Lyon Heart study and PREDIMED provide excellent quality evidence from diverse populations and for benefits with respect to a wide variety of health outcomes. Second, there are distinct advantages compared to other healthy eating options. Mediterranean eating has less salt than Asian diets and includes olive oil and wine. Mediterranean diets include fish, yogurt and moderate amounts of meat, while vegetarian diets do not, and therefore, are lacking in certain areas, including missing some essential nutrients. Third, most people simply cannot or will not follow most rigid diets for very long. Mediterranean diets are tasty, appealing and enjoyable and therefore, they can be adopted sustainably over the long-term as a lifestyle.