Meat alternatives are clearly having a moment, although they aren’t new. There have been veggie burgers available for a long time. But the meatless meat products on the market today are different in one important way: they are made from plants and are meant to taste like meat, be marketed to meat-eating customers, and replace some of those customers’ meat purchases.
This “flexitarian” consumer is the target market of the “Mega Meatless” range which was officially launched yesterday by Megas Yeeros, one of the largest meat processing companies in Greece.
“The plant based/meatless trend is rapidly growing, especially in the US. In fact, by 2025 10% of food consumption is expected to be plant based,” stated Mr Nikos Loustas, the company’s CEO. “The Mega Meatless range is the Greek answer to all those American products. Yeeros, burgers, meatballs, souvlaki. All produced from 100% vegetable protein from legumes, rice, peas, quinoa. We are talking about products which are 100% plant based, gluten free, soy free, Non-GMO, cruelty free, with no added hormones or antibiotics, and high in protein.”
“We have invested in extensive R&D and we are still developing other products, such as the Meatless souvlaki, which will hit the market in the coming months. We also intend to build a new production unit, especially for the Mega Meatless range in order to cover export demands,” Mr Loustas added.

According to Megas Yeeros, the United Kingdom is the first stop of the Mega Meatless products on their way to international markets –there is extensive interest from most of the Scandinavian countries. And since we are not talking about actual meat, but plant based products, no special legislation applies. Therefore, the range can be exported to the US without having to invest in a new factory (the company already owns a plant in New Jersey), at least for the time being.
“We have a lot riding on the Meatless range. We expect that in the next 3 years, 10% of our production will be plant-based,” disclosed Mr Loustas. “At first we will be exporting directly from Greece, but we are looking for a plant in the US, somewhere close to the one we have there. It all depends on demand. The US market is the huge wager before us.” 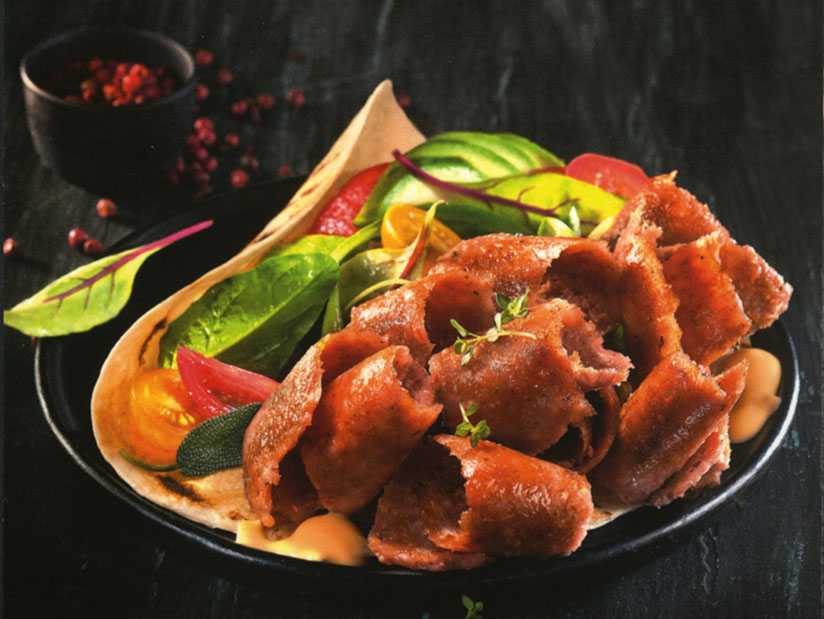 Mr Giannis Koutsourakis, Megas Yeeros R&D manager, explains that “This is the first plant based yeeros, which is also soy free, gluten free and GMO free. The American factory was an immense help to our plant based research and the creation of the Meatless range.”
“We did a lot of protein testing. We wanted to move away from soy –and we did it. We achieved a 13.5g percentage of protein,” he explained, while adding that “Our ‘crown jewel’ is the Mega Meatless yeeros, while the burger is globally the most widely-sold product. We intend to develop further the Mega Meatless range with pre-grilled yeeros and souvlaki, as well as other products which are currently in the R&D stage.”