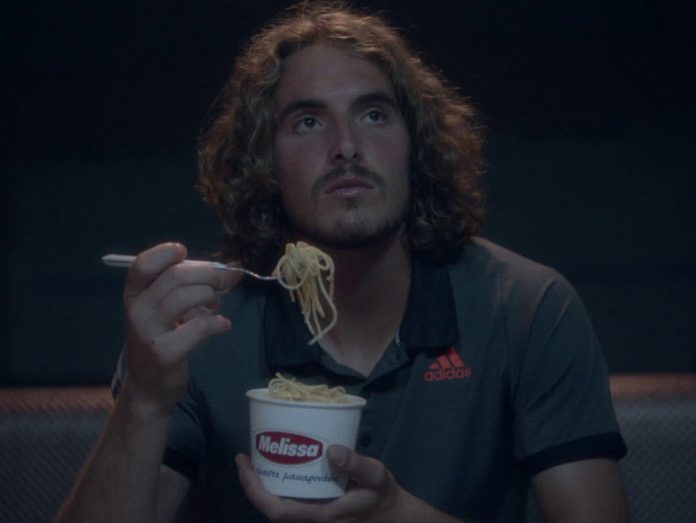 Melissa, one of the oldest and most prestigious pasta companies in Greece, is joining forces with Greek tennis phenomenon and No5 in the world ranking, Stefanos Tsitsipas in a new ad campaign named “The Road to the Top”.
As per the company’s press release, “Stefanos and Melissa share the same ideals and the same values. Hard work, love for what you do and dedication to your goal will help you overcome any obstacle and lead you to the top.”
“This new collaboration gives Melissa the opportunity to talk about the elements that compose the company’s ethos, with the help of an athlete who made the whole of Greece, not only to get to know, but also to love tennis. Almost as much as he loves pasta.”

The name “Melissa’’ (bee) was given to the company’s pasta products —and eventually to the company— by Alexandros Kikizas in 1947 when he was inspired by the hard working and proud bee. Ever since, Melissa was embraced by consumers for the constantly high quality of its pasta, its packages, its good prices, its wide variety, as well as the constant brand development and its opening into new categories of products.
Today, six decades after its establishing, the third generation of the Kikizas family manages one of the most important food companies in Greece, active in more than twenty five countries. Production of pasta and durum wheat semolina constitutes της company’s basic activity. Each year, they absorb 100,000 tons of Greek durum wheat of excellent quality, while the vertically managed complex of mills and the spaghetti factory in Larissa produce annually more than 50,000 tons of pasta. The presence of Melissa on the European market was strengthened by the establishment of the subsidiary company Atlanta SA, through which they export a number of Greek products to the Polish market. The constant investment in new technologies and in the latest technical equipment, the strict controls and the wheat from the fertile valley of Thessaly contribute to the excellent quality of Melissa pasta.

HAPO: Two new research projects in cooperation with the University of Patras

Presentation of a study on the potential of Agrologistics in Greece