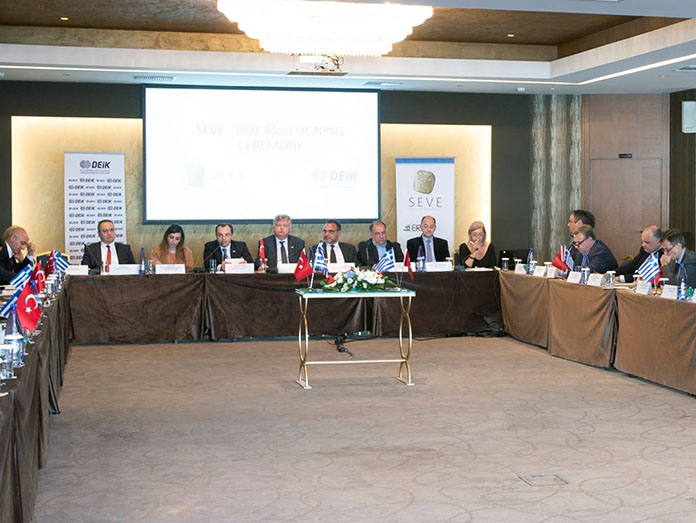 A Memorandum of Cooperation was signed on Tuesday 3 March 2020 in Thessaloniki, between the Greek Exporters Association (SEVE) and the Turkish-Greek Business Council of the Foreign Economic Relations Board (DEIK), aimed at developing the economic and trade relations of the two countries. The business event, which took place behind closed doors, was attended by members of the Turkish-Greek Business Council led by its President, Mr Levent Sadik Ahmet and businesses-members of the Foreign Economic Relations Board (DEIK). SEVE was represented by Dr Georgios Konstantopoulos, President of the Association, as well as members of the Board, while the Deputy Minister of the Interior (Macedonia-Thrace), Mr Theodoros Karaoglou, the Consul General of Turkey in Thessaloniki, Mr Efe Ceylan, and Mr Alexandros Alexiadis, Head of the Commercial Office for Northern Greece, were also present at the event.

Dr Georgios Konstantopoulos, President of the Greek Exporters Association delivered a welcome address, referring to the need to boost Greek exports through the cooperation of Greek and Turkish companies. At the same time, he stressed that Turkey is the 4th most important destination for Greece, with bilateral trade between the two countries showing a significant increase in the last five years and amounting to 3.9 billion euro in 2019. Finally, Dr Konstantopoulos referred to the fact that synergies are essential to the development of the Greek economy, emphasizing that Greece and especially northern Greece will be a pole of attraction for investment and business opportunities in the near future.

Mr Ahmet, President of the Turkish-Greek Business Council (DEIK), spoke afterwards, praising the importance of the co-operation of the two operators, aiming to double the bilateral trade of the two countries from 4 billion to 8 billion dollars. At the same time, he set the objective of jointly implementing projects in third countries.

Mr Theodoros Karaoglou, Deputy Minister of the Interior, then referred to the two peoples’ common points, saying that this particular initiative is the beginning of a new partnership and the reason for the leaders of the two countries to come closer.

The business event concluded with the signing of the Memorandum of Cooperation between the two operators, in the expectation of a closer cooperation through the exchange of mutual information on issues related to international trade and entrepreneurship, interventions to resolve any problems with a view to facilitating and promoting economic and commercial relations between the two countries, and joint actions taking place both in Greece and Turkey, as well as in third countries.