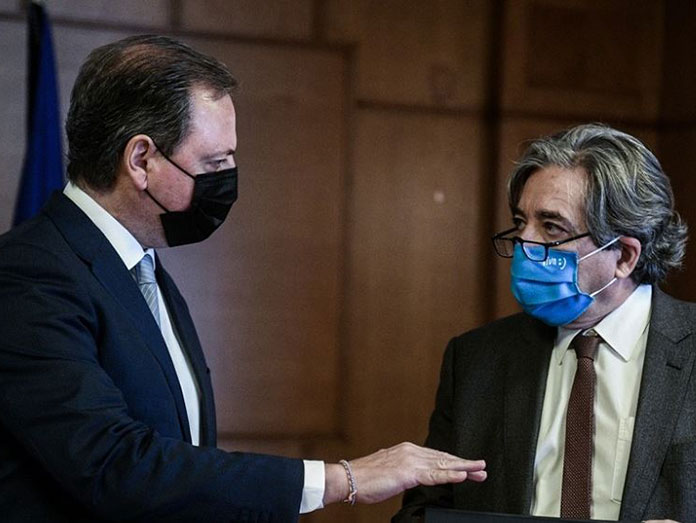 The Greek Minister of Rural Development, Mr Spilios Livanos, had a very constructive meeting on Tuesday, 11 May, with the Portuguese Minister of Maritime Affairs, Mr Ricardo Serrao Santos, and the Deputy Minister of International Affairs, Mr Eurico Brilhante Dias, with the participation of the Greek Deputy Minister of Rural Development, Ms Fotini Arabatzi.
At the meeting, the possibilities for further cooperation between the two countries on fisheries issues, issues related to the review of the existing Common Fisheries Policy (CFP) that will be addressed at the Lisbon Informal Meeting of Fisheries Ministers in June, the bilateral cooperation on fish farming issues –mainly regarding technology and equipment– as well as exports of canned and processed fish, were discussed.

Greece, a leader in aquaculture

Mr Livanos stressed that Greece is an exports champion with products of incomparable taste, quality and food safety in the EU and that it has developed extensive know-how and technology in the field of marine aquaculture. That is why, he explained, there should be an increase in trade of fishery products between the two countries. He also pointed out that the further development of aquaculture is a key priority in the proposal of the Greek government of Mr Mitsotakis for the utilization of resources from the EU Recovery Fund.
The Minister also highlighted the need for closer cooperation to address the effects of climate change on the two countries. He also called on the Portuguese Minister of Maritime Affairs to support the joint initiative of Greece and other EU member states for a fairer and more objective product labeling.

The Deputy Minister, Ms Fotini Arabatzi, underlined the importance the Government of Kyriakos Mitsotakis is attaching to fishing, creating for the first time a portfolio of Fishing Policy together with Livestock Farming and Food.
Ms Arabatzi also referred to the diligent efforts of the Ministry for the settlement of the country’s maritime spatial planning (legalization of the Areas of Organized Development of Aquaculture Activities), which will send out a clear signal of confidence to the companies in the sector as well as new investments. The Deputy Minister also referred to the planning of a special program for the modernization, digitization and development of fish farming units with new products and new markets, with the support of the Recovery Fund, especially for the Aquaculture Sector.
The special importance given by Greece to the protection of the marine environment, to sustainable development and the protection of fish stocks, was also emphasized, by highlighting, inter alia, the Memorandum of Cooperation with Enaleia (a social start up, that started in 2016, and is training professional fishermen on how to earn more money, while catching less fish, while assisting them to adopt new sustainable fishing techniques, such as fishing tourism) and fishermen for the cleaning up of the seas from plastic.

Sommeliers from across the world rendezvous in Athens