A historic, for Greek trade show industry standards, strategic partnership between the Nurnberg Messe Group and Forum SA, the largest exhibition company in Greece, has been carried out successfully only last week. The acquisition of FORUM SA from the one of the most dynamic German trade fair companies only proves the confidence the strong German economy shows towards healthy Greek entrepreneurship, as well as the significant dynamic of the trade show industry in Greece. It is worth noting that its integration into the Nurnberg Messe Group makes Forum SA the largest subsidiary of the German exhibition behemoth, worldwide.

Greece as an exhibition hub for the entire Southeast Europe

The unprecedented dynamic created by the meeting of these two leading companies, generates countless prospects and opportunities for the Greek economy, and especially for the country’s trade show industry. A sector which, according to a survey conducted by ICAP, is expected to further increase within the years 2019-2020, with an average annual growth of 8.5%. Helped by the know-how, operational experience, portfolio, vision and the synergies between the two companies, Greece will become an exhibition hub for the Balkans and Southeast Europe.

As stated by Mr. Nikos Choudalakis, President and CEO of Forum SA and “architect” of the agreement by the Greek side, at the joint Press Conference: “Right from our first meeting with Nurnberg Messe Group executives, in May 20018, it was obvious that we share a common set of values, a similar business ethos and goals, as well as a shared vision of the future. Looking to the future with optimism and believing in our potential as well as the prospects opening up for our country, we sketch out together a fresh start, focused on extraversion and international development. A start that would cross Greek frontiers and will help turn Greece into a significant trade show hub for the entire Southeast Europe.”

Both Dr Roland Fleck and Peter Ottmann, the two NürnbergMesse CEOs, made one thing perfectly clear at the press conference in Athens: “We’ve achieved the goals we set in our corporate strategy two whole years ahead of schedule. And that major step forward will give us the momentum we need to approach the next chapter of the NürnbergMesse success story.”

In addition, Mr Ottmann maintained that “With its high-profile international trade fairs, Nürnberg Messe has worked its way up into the ranks of the 15 largest trade fair organizers in the world. Our next objective is to make it into the top ten. We are aiming to become one of the ten biggest trade fair companies in the world. Greece will play a pivotal role in this in the future.”

By a joint decision of both the Nurnberg Messe and Forum SA, the management will remain in the years to come in the hands of the Greek company’s executives, given the strong conviction that the foundations built by the Greek management are solid and can guarantee a bright future for the new era ushered by this historic deal. 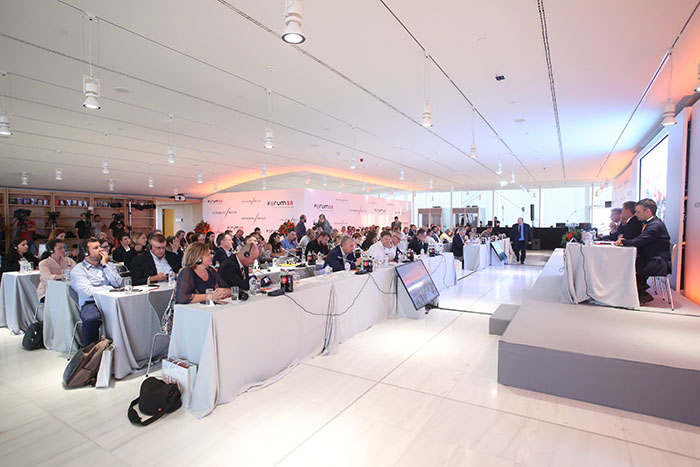 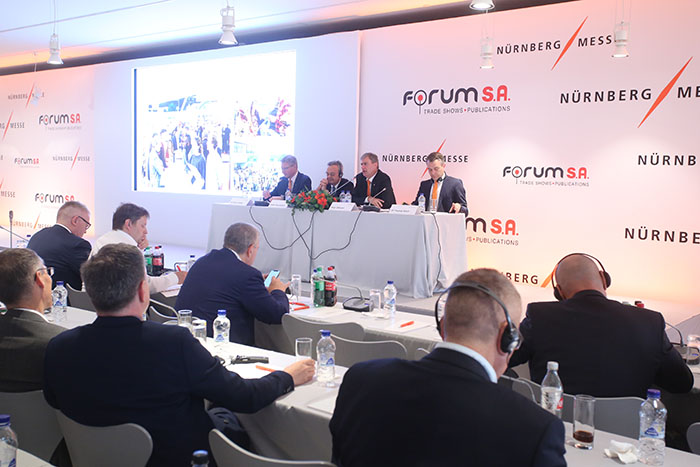 Ever since its establishment in 1988, FORUM SA has come a long way by constantly evolving, growing and expanding its activities and is considered the largest international trade show organizing company in Greece, holding 23% of the domestic market.

More than 4,000 Greek and international exhibitors participate in said trade shows, while approximately 350,000 professionals from Greece and the rest of the world attend as visitors. Finally, the company also publishes 4 high-quality trade magazines, offering significant and comprehensive information to professionals of their respective sectors.

The Nurnberg Messe Group is one of the 15 largest exhibition companies in the world. Its portfolio covers around 120 national and international trade fairs, exhibitions and congresses, of which the best-known are: BIOFACH, BRAU BEVIALE, FACHPACK, CHILLVENTA, etc.

The Nurnberg Messe Group employs more than 1,000 people in 11 parts of the world, –among them, in Germany, Brazil, China, India, Italy, Austria, USA, and Greece– a network of representative agencies active in over 119 countries, and 15 subsidiaries and holdings. In 2018, the NURNBERG MESSE GROUP turnover amounted to €315,100,000, with a net-income 0f €28.2 million.

Stani Dairy: Authentic Greek yogurt in the US