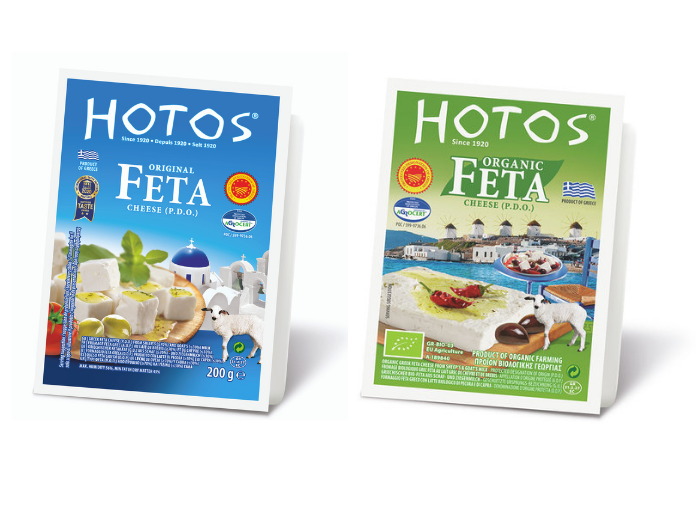 Feta cheese produced by Hotos SA is a Protected Designation of Origin (PDO) product, made exclusively from 100% fresh pasteurized Greek sheep and goat milk. It has a pleasant taste, slightly sour and not very salty, and it a rich aroma. Its texture is hard, solid and does not crumble. Its most essential characteristic is its invariable taste and its quality, which has been awarded the London Golden World Quality Prize. It is used as an appetizer or accompanies main dishes and salads in a wide variety of Mediterranean and other recipes.
The maturation time for Feta cheese is at least 2-3 months from the date of production.
Hotos SA offers a wide selection of Feta packages: Metal containers of Feta cheese in brine; airtight packages; resealable airtight packaging with a zipper in extra virgin olive oil and herbs; plastic box containers of Feta cheese in brine; plastic box containers of Feta cubes in brine; Plastic box container of Feta cheese cubes with extra virgin olive oil and herbs; and airtight packaging with 50% less fat. 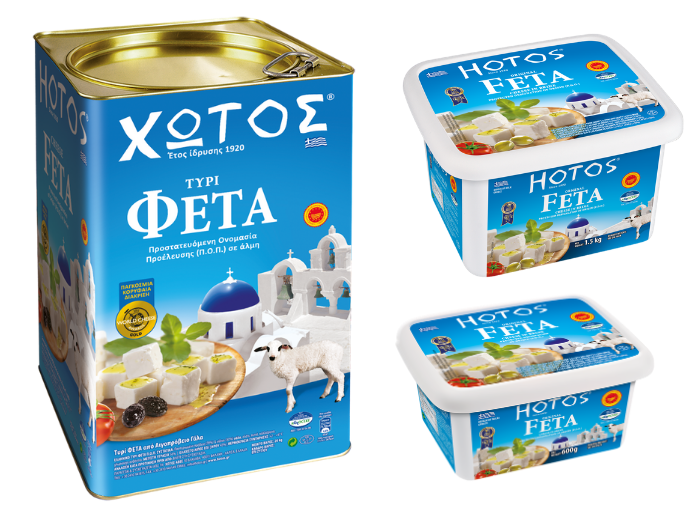 The Hotos family has been exclusively engaged in cheese-making for three generations. This tradition started with grandfather George Hotos who perfected the secrets of Feta and Manouri making, drawing from the accumulated knowledge of the tradition of the people of the mountainous region of Samarina, in Northern Greece.
Today, Hotos SA remains true to the family tradition, and combines almost a century’s worth of know-how with a state-of-the-art dairy unit, in order to ensure the superior quality of its products. The Hotos privately-owned dairy is situated at the very center of the milk production region, thus enabling the company to apply proper quality control at all production stages. Building on its love for tasteful and healthy Greek cheese, and with the utmost respect towards its customers, the company exports its products to many countries of Europe, to the US, Dubai, Kazakhstan, Singapore and many more. Hotos SA applies the ISO 22000, BRC, IFS, REG.(EU) and HALAL standards at all stages of production.