Translating his mastery of haute cuisine and his passion for exceptional ingredients into impeccable dishes, Greek chef Philip Chronopoulos has put the Restaurant du Palais Royal on the international gourmand map and has earned himself a Michelin star!

Greek chefs are constantly gaining accolades not only at home, but also while working in some of the best and swankiest restaurants in the world. Case in point, the Restaurant du Palais Royal, which just a few weeks after its opening, proved a definite success, mostly thanks to the cuisine by Philip Chronopoulos, a native Greek who has trained with Alain Passard and who was head chef at the Atelier Etoile de Robuchon for several years. At the Restaurant du Palais Royal he signs a menu that pays tribute to French cuisine without forgetting his original influences, while placing the produce at the center of attention. Haute cuisine at its best!

What has changed in your professional life after the Michelin star
Personally, I haven’t changed one bit. Everything continues in the same way. With the same intensity, effort, love, and passion. What has changed is the way people treat me. I feel that now they have more respect towards my work, although this does not mean that they did not respect me before the Michelin star.

Do you feel extra pressure after the star?
There is indeed pressure, but not on how to keep the Michelin star per se. The pressure is on what to do next, where to go next; how to further develop the flavors, the dishes. You see, a Michelin star is only the first level. So, you either stand still or you move forward.

Has your Greek heritage and culture affected the way you cook?
I cook with my heart and my emotions. This is something I was never taught, but, instead, learned from my Greek mother and grand-father. Greek cuisine is always at the back of my mind. When I want to create something, I don’t think of a specific Greek recipe. I simply use ingredients the Greek way. The way we cook them in Greece.

Do you use Greek products in your dishes? Which ones?
Indeed, I do. Feta, extra virgin olive oil, sea fennel, bottarga, tahini. 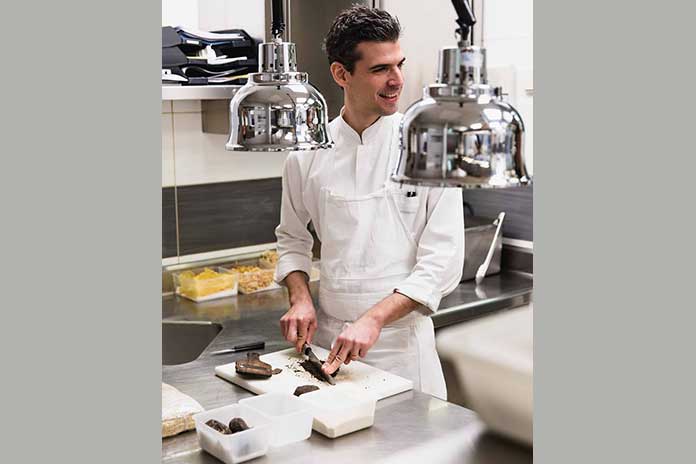 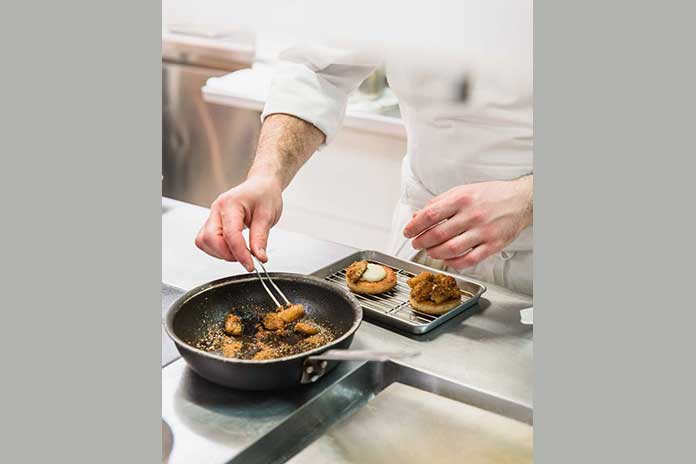 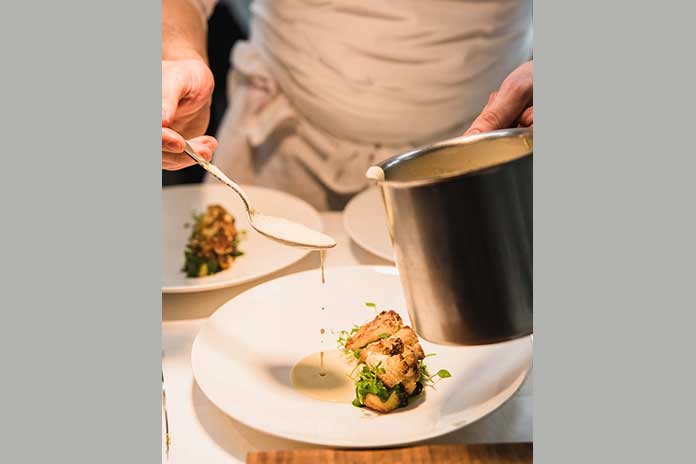 Mediterranean and Greek for that matter cuisine is a major trend.
International consumers love Mediterranean flavors. They are impressed by the unexpected mix of ingredients, such as sea fennel and caviar, two completely different ingredients which create an ideal combination. I never cook 100% Greek, but I do use some Greek touches in my dishes. People outside of Greece are now discovering Greek cuisine and do not stop to be amazed by its flavors.

Where do you get your inspiration from?
Inspiration is not something overly conscious. You can get inspired by anything and everything; a color, a shape, a photo, a memory, a travel, a meeting.

Do you think there is a New Greek Cuisine and what is –or should be– its nature?
Greeks have finally realized that they have exceptional ingredients in their hands. And this makes them more demanding. The bar is currently set very high and customers recognize and appreciate this kind of top-tier quality. To me, New Greek Cuisine does not mean that we must discover something new. Young Greek chefs are more open, they travel more, and they adapt Greek flavors to recipes and dishes from other countries. Nowadays, we pay more attention to what we make, what we serve and where our ingredients come from.
On the other hand, the bar is constantly raised higher and higher in Greece. There are more nice restaurants than ever before. Chefs rely more on the produce, on the ingredients, which are at the core of their cuisine. Not to mention that in Greece fruit and vegetables have real flavor. 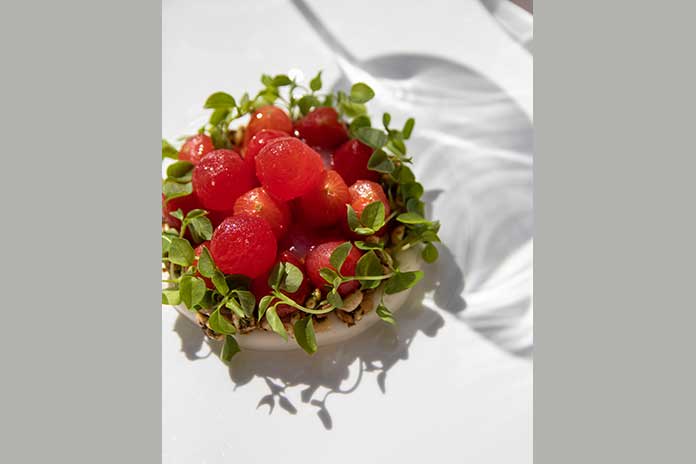 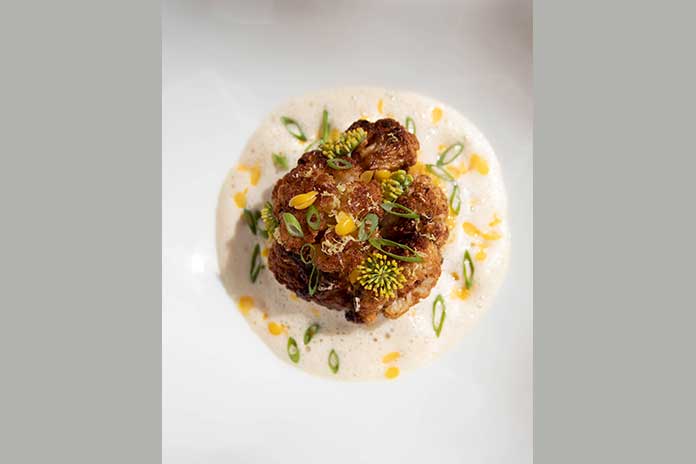 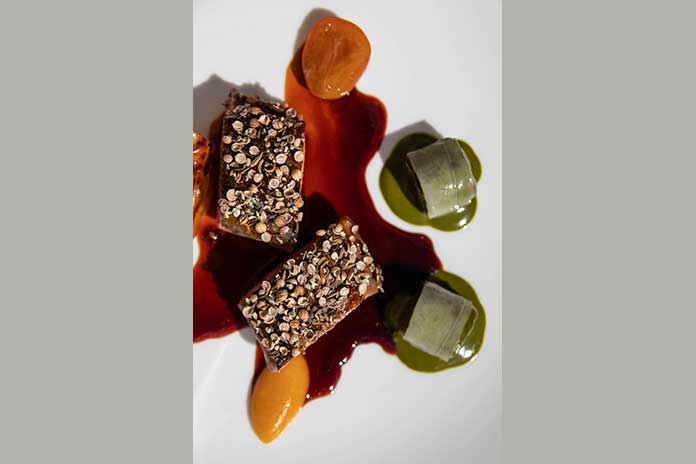 How did you decide to go and study in France? Was it a difficult decision?
I started my professional training in Lyon, at the Paul Bocuse Institute –a French chef had recommended it to some family friends. Back then I did not give it a lot of thought, but in the beginning, things were really difficult, mostly because I did not speak the language. And in 2004, there were not a lot of Greeks outside of Paris.

How do they treat you in the kitchen? Are you the foreigner?
I spent seven years close to Joel Robuchon. He used to call me “Le Grec”, the Greek, in French. At first, it used to bother me and I used to tell him “my name is Philip”. I knew that he wasn’t being racist, just stating the obvious: I am Greek. Today, I’m proud to be called “the Greek”.

How would you describe the menu you propose at the Palais Royal restaurant?
At the Restaurant du Palais Royal I try to serve “emotional” dishes and distinct flavors, by attempting to find the right way to cook things in order to bring out the flavors and aromas of each ingredient. I need to cook to express myself and not to impress.

What do you intend to bring to the table –pun intended– at your new project, Nolinski?
My latest project, the restaurant at hotel Nolinski is totally different from the Restaurant du Palais Royal. I intend to serve simple, playful dishes from a nondescript cuisine. The main thing, however, is the excellent ingredients.

What are your plans for the future? Do they include Greece?
Well, I would like to keep doing what I’m doing with the same passion and enthusiasm. At this point, I really miss Greece –I believe we should never forget where we come from. Nevertheless, I’ve never thought about going back to Greece. I don’t have any job offers on the table, but I wouldn’t rule it out completely –it must be something that I feel passionate about.