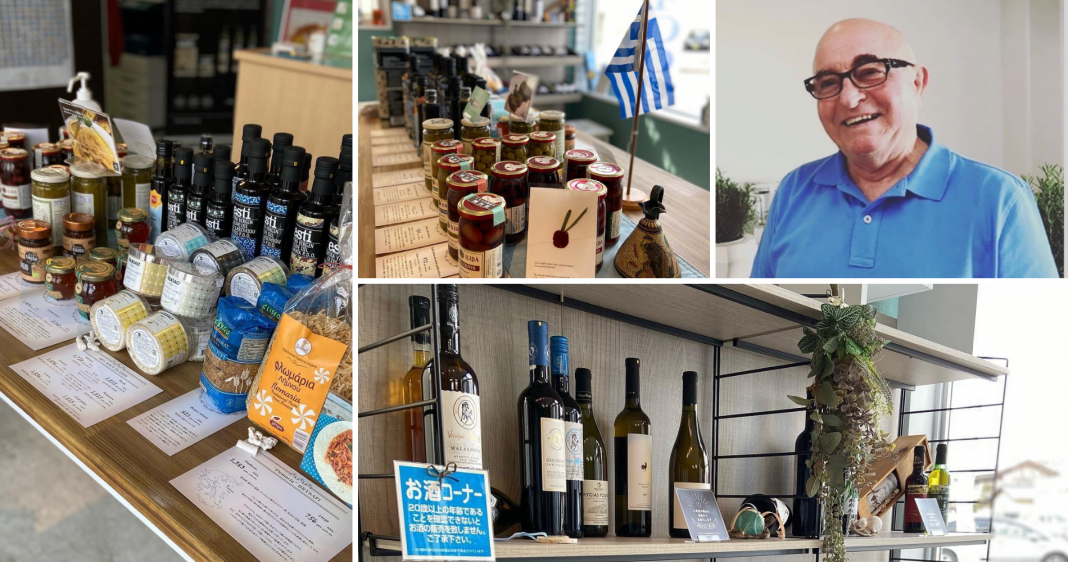 How do you say “Greek yogurt” in Japanese? Up until 20 years ago, the term –together with Feta, Kefalograviera and other products of Greek origin– was completely unknown. The fact that today Japan is a noteworthy importer of Greek products is also due to the efforts of one man: Mr Thanasis Fragkis.

Twenty years ago, Mr Thanasis Fragkis was the sole importer of Greek foodstuffs to Japan and nostimia.com, his e-shop selling Greek products, was treated as the vanity project of a Greek feeling homesick. With high risk, however, comes high reward and Mr Fragkis is now considered a pioneer businessman and the person who opened the Japanese market to quality food products from Greece. And whose vision made items such as extra virgin olive oil, wine, Feta cheese and Greek yogurt staples in the diet of the most discerning Japanese consumers.

How did you decide to bring Greek Feta and olive oil in Japan?
My wife, who is Japanese, and I met and got married in England where I lived at the time, and decided to move either to Greece or to Japan. After visiting both countries and evaluating all possibilities, we opted for Japan. The main reason was that upon visiting Japan and making a basic research of the marker, we realized that Greek products were almost totally absent from the stores. This fact was very challenging but also very exciting albeit a gigantic risk.
The original products we imported did not include dairy products, as we had no refrigerating facilities at the time and considering the fact that cheese is not part of the traditional diet of the Japanese, we decided to try mainly with wines, olive oil, olives, and honey. Feta was added a couple of years later.

Was it a gamble on your part? And did it pay off?
According to virtually everybody we talked to, it was madness! Something that we almost believed as we got no customers for the first six months. And, yes, it did pay off in the long run.

What was the biggest challenge?
The fact that we had to start from scratch, with elementary information about Greece. In a country that no serious effort was ever made to create the basis for Greek exports. It was a big surprise to people to learn that in Greece we had four seasons in a year and produced wine and olive oil.

How did the Japanese respond to Greek products?
At first with curiosity. Once they learned about them and tasted them, let’s just say that over 90% of our customers are buying regularly.

What are Japanese looking for when picking a Greek product?
Over 95% of our customers are women, that unlike men demand more than the practical use of the product! As one would expect, the majority of them would come across a Greek product for the first time, so the most important factor is visual attraction, followed by taste and dietary facts.

What are your most popular products?
Wines and cheese.

Which products show the most promise?
I think cheese. Suffice it to say that when we started our company in 2001, the annual consumption of cheese was 800g per person. Today, it is almost 3.5kg!

How do Greek products fare compared to other Mediterranean products in Japan?
As opposed to many other countries, Japan does not have a Greek community worth the name. Only some 300 Greeks are living here and are spread all across the country. Although this fact makes us feeling a bit lonely, mistakes that happened in other places by importing products popular among Greek immigrants but totally unsuitable for the local taste, did not happen here. One or two attempts made before our company was founded, were too small to have an effect. It is not my style to praise myself, but I feel proud of the fact that as pioneers we’ve set the bar very high by only importing products of the highest quality and the few other Greeks that followed our lead, do just the same and on quality alone, we beat our competitors, hands down.

In recent years, Japan has started to acknowledge the benefits of olive oil and is even producing it —albeit in small scale. What was the picture of the Japanese olive oil market when you first established your company? What was the picture of the Japanese market in general when you started?
As far as Mediterranean products are concerned, the dominant powers then and now, are Italy and Spain, with France the strongest in wine and cheese. In the olive oil front, the demand becomes stronger for extra virgin olive oil and the balance has shifted a little, as new players like Turkey and Tunisia come into the picture. Furthermore, new world countries like Australia, USA, South Africa and South America, are now present, but not yet making an impact. As far as Japanese olive oil is concerned, like Japanese wine, is improving in quality, in spite of the unsuitable climate.