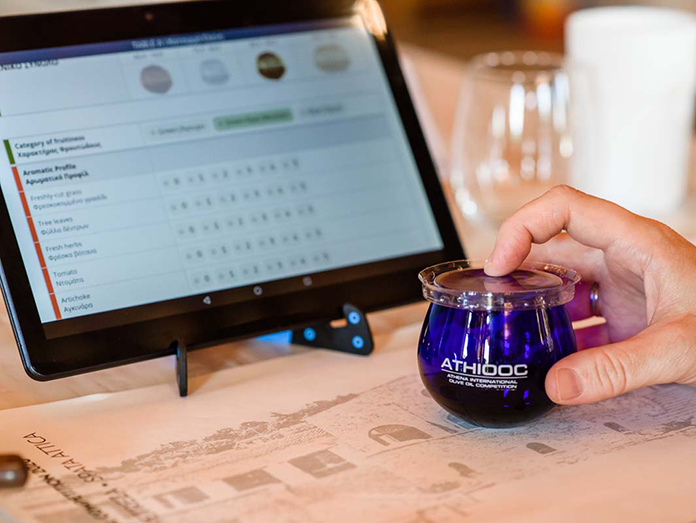 The Athena International Olive Oil Competition (ATHIOOC) is one of the fastest-growing international olive oil competitions in the world and the only one held in Greece. In the past five years it has gained the respect of world-class judges and producers from both hemispheres who trust it with their samples. In 2021, its 6th edition took place between 2-5 June, in Lesvos, one of the largest Aegean islands, a place with an extensive network of olive groves and an important production of high-quality EVOO that embodies the uniqueness of the island’s native cultivars and the value of its agricultural wealth.
In this year’s competition a panel of 25 judges from 12 countries had the chance to try the 575 olive oils that participated (+25% compared to last year) –297 from Greece and 278 from 22 other countries. The high turnout of olive oils from all over the world consolidates the reputation of the competition as a prestigious and important event for Greece, which has become the international headquarters of one of the most important evaluation procedures of an emblematic product not only for the country, but for the whole Mediterranean.
The best olive oil of the competition was Italian, from Livorno in Tuscany. It was Il Cavallino Special Edition from Azienda Agricola Il Cavallino di Salvadori Romina, produced from the Leccio del Corno olive variety.
Finally, it is worth mentioning that the choice of Lesvos to host ATHENA 2021 proved an excellent option, not only because it is the 3rd most important olive growing region in Greece accounting for 20% of the domestic production, but also due to the existence of two relatively unknown olive varieties, Kolovi and Adramitini, on the island.

The international jury, chaired by the Spanish José María Penco, awarded a total of 369 medals: 38 Double Gold, 144 Gold, 101 Silver, and 86 Bronze. Of those, Greek olive oils snaped 9 Double Gold awards, 49 Gold, 52 Silver, and 51 Bronze.
“In the six years ATHENA takes place, there is a significant improvement in the image of Greek olive oils, winning more and more gold medals and Double Gold medals, which are the highest distinction. In 2016 not a single Greek olive oil managed to obtain a score above 95/100 (Double Gold), this year nine of them did!”, said with satisfaction Maria Katsouli, director of the competition and accredited olive oil taster.

It is interesting to note the steady increase in the number of different olive varieties participating in the competition and even the emergence of some of them that are particularly rare. This year, 146 different olive varieties participated, with most of the samples being single variety olive oils (403) and not blends. In fact, the best Greek olive oil for this year, Laurel & Flame by AMG Karabelas from Ancient Olympia, is produced from the rare variety Tsampidolia, while in 2018, Nemoutiana, from the same region, had excelled.
Among Greek varieties, Koroneiki was traditionally at the forefront of entries, with 151 samples –6 from Brazil, Israel, and Tunisia. In fact, for the first time in the history of the competition, the highest score of olive oil from the Koroneiki variety went to an olive oil outside Greece, to the Brazilian Prosperato Exclusivo Koroneiki, further recognizing the international career of this great varietal. Among the Greek Koroneiki olive oils, the highest score with a Double Gold Medal was awarded to Terra Creta from Kolymbari, Chania, in Crete.

The distinctions won by Greek aromatic and flavored olive oils, which tend to become a leading force in this category, are also significant, given the plethora of fruit, herbs and spices found in Greece with which imaginative producers enrich olive oils to create new specialty products. Actually, this year at ATHENA 2021, one of the nine Greek Double Gold Medals is Laconiko Lime, with lime flavor, which also won the distinction as the top flavored olive oil of the competition. Of the 62 such olive oils that participated in the competition, 50 were Greek and 30 of them won an award

Region of South Aegean to set up gastronomy cluster