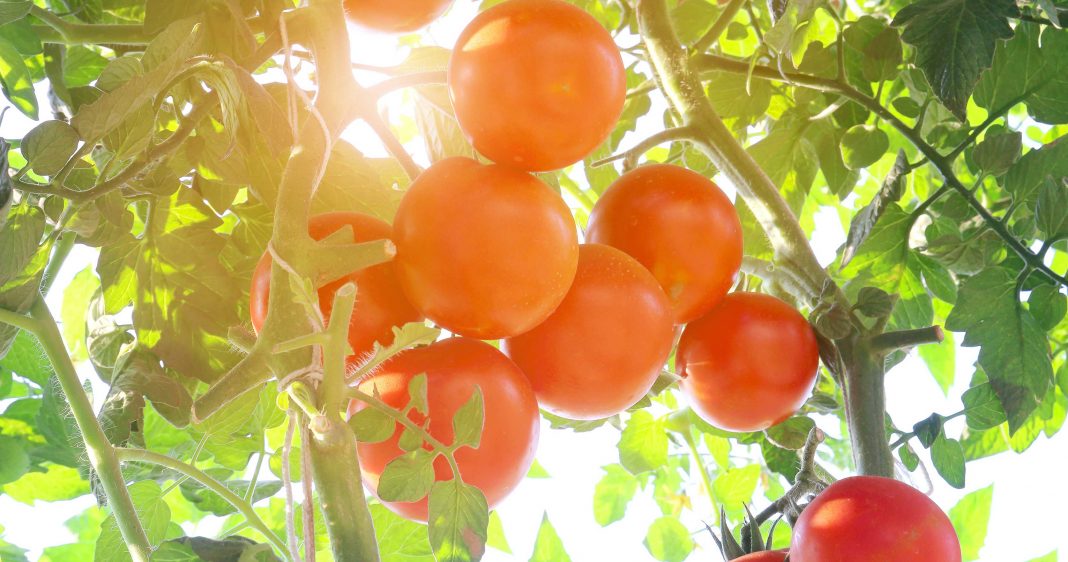 Tomatoes are a major agricultural crop farmed in Greece and one of excellent quality and organoleptic characteristics. As a result, Greek tomatoes are perfectly red, utterly juicy and deliciously tasty.

The vegetable sector is a key sector in EU agriculture, weighting 13.7 percent of EU agricultural output. In 2016, the total production of vegetables in the EU was 63.9 million tons. Tomatoes, carrots and onions were the most important vegetables, with an estimated 17.9 million tons of tomatoes produced during the course of 2016. Approximately two thirds came from Italy and Spain (11.2 million tons), while Greece accounted for 5.5 percent with 1.02 million tons harvested, putting the country in 4th place of all EU tomato production.
In addition, tomatoes occupied the largest area of crops in the EU, which amounted to a 11.7 percent of total vegetable arable land for the year 2015. During the same time, the areas used to grow tomatoes were predominately in Italy (41.9%) and Spain (22.8%), followed by Romania (9.5%), Portugal (7.3%) and Greece with a 6.7 percent.
Mr George Polychronakis, Advisor – Representative at Incofruit Hellas, the Association of Greek Businesses Exporting & Handling Fruit, Vegetables & Juices, states that “in Greece, 13,323 hectares of tomatoes were grown in 2017 and 878,770 tons of tomatoes were produced, of which 540,308 tons were intended for fresh consumption and 338,447 tons for processing. From the 8,583 hectares producing fresh tomatoes, 5,917 hectares were field crops which produced 230,653 tons of tomatoes.” 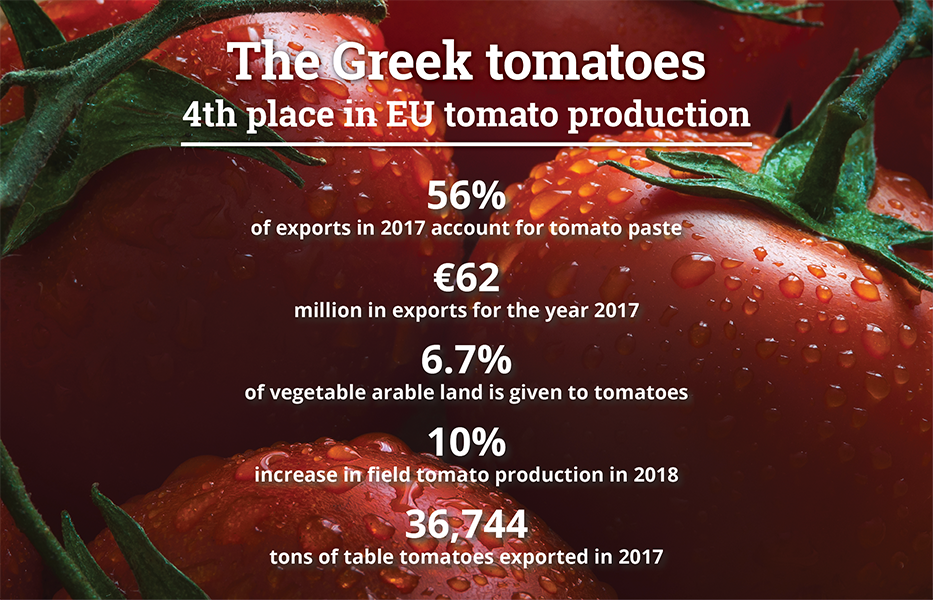 “With regards to tomato production, the largest arable area in Greece is located in Crete, but most tomatoes go to the Greek market,” confirms Mr Alexandros Vourtsakis, CEO at Hellenic Farming SA. “In fact, exports take place mostly during winter, when the number of tourists in the country is at its lowest,” he discloses.
Mr Aristides Molfetas, Commercial Director at Karantinos SA explains that “tomato is a significant crop for merchants, since it can be distributed to all three channels of the market –modern trade, wholesale or the HoReCa channel– and is directly linked to the Mediterranean diet. In addition, Greek climate ensures that our country produces the best tomatoes. And since prices are more or less fixed, the only way to differentiate is by investing in quality and flavor. Therefore, we urge tomato farmers to certify their products (many of them are looking into the GlobalGAP accreditation) and I think they have finally realized that in order to sell and, especially, export their produce, they need to get certain internationally recognized certificates.”
Traceability is also very important. Consumers are nowadays well informed on food quality and each product’s organoleptic characteristics, and they are really intent on knowing what exactly is on their table, its source, its production process. Greek farmers and tomato suppliers are strictly adhering to the latest legislation as well as exploring all the newest trends concerning safety, innovation, and consistency in size, color and flavor. According to Mr Vourtsakis, the latter is assured by “choosing the right tomato varieties and by using specific farming methods, such as hydroponics. Specifically, in the case of hydroponics –a rising type of cultivation– we can provide plants with all the necessary nutrients according to their stage of development, exactly when they need them.”

Concerns about global warming and achieving organic goals are also on the table. That is why most Greek tomato units are geared towards the adoption of controlled production and environment practices, such as greenhouses, to ensure constant quantity and quality. “On our part, we urge farmers to use sustainable and environmental-friendly production methods,” clarifies Mr Molfetas. However, he concedes that although organic food is a rising trend, Greece due to the economic crisis of the last ten years, has been left somewhat wanting. “Organic tomatoes are more popular abroad where consumers are more familiar with the concept of bio and organic products. This is no passing fad, so lately things are also beginning to change on the farming front as far as Greece is concerned.”

Greek tomato products and the world

The European market –particularly the countries of western EU– is the main outlet for Greek tomato exports. Specifically, double concentrated and triple concentrated paste is shipped to companies for remanufacturing in the United Kingdom, Poland, the Netherlands and Germany. In addition, canned tomatoes are exported to the United Kingdom, to Belgium and the Netherlands. Therefore, it is safe to assume that a major percentage of export turnover originates in neighboring countries or countries that are relatively close geographically. Greek sauces, however, are mainly aimed at the Japanese market, alongside Bulgaria, Saudi Arabia and the USA, among others.
The Greek tomato industry only exports moderate quantities of sauces and ketchup. Over the past five marketing years, less than 2,500 metric tons of sauces were exported on average each year, for an average turnover of slightly more than 3 million euros. These volumes remain relatively modest compared to the performances of the industry’s major players, but the fact remains that Greek operations for this type of product have grown spectacularly over the past ten years, from an annual 420 tons during the period 2003-2007 to 2,500 tons per year over the period running 2013-2017, with an average annual growth rate of 19 percent! Even so, sauces only account for 2 percent of the raw materials absorbed by exports and approximately 5 percent of the annual turnover.
Greek companies export mostly pastes (38,300 metric tons in 2017) and relatively large volumes of canned tomatoes. It is, nevertheless, a fact that the composition of Greek revenue from exports has been radically altered since the beginning of the 2000s. Once virtually the only profit-making category, pastes only generated 56 percent of the income stemming from foreign markets in 2017, at the end of a period of regular regression that has actually let canned tomato exports take up a lot more space. Namely, over a period of 20 years, Greek exports of canned tomatoes, despite being directly in competition with Italian products on the markets of Britain, Belgium, the Netherlands and the USA –to name the main export outlets– progressed at a consistent and virtually regular rate of 5 percent (CAGR) per year. As a result, the volumes exported grew from 10,500 metric tons in 1997 to approximately 37,000 tons in 2017, taking the turnover from 4.8 million euros in 1997 to almost 21 million euros in 2017, which is an increase of close to 200 percent in 20 years! 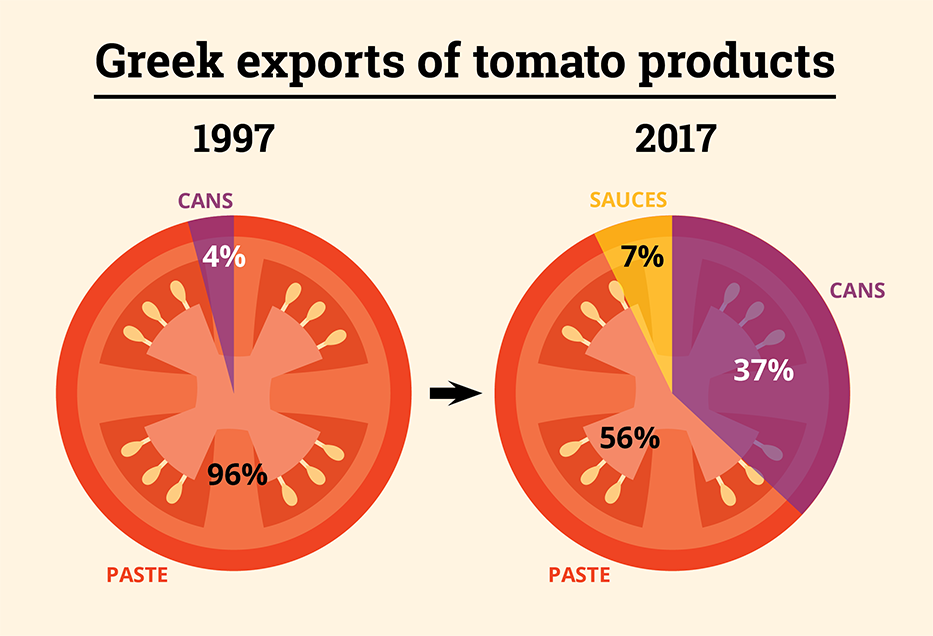 A new age for exports

Although its production only accounts for a tiny proportion of the global processing output (1.2%), Greece is one of the rare countries whose products are exported all around the world. About 15 destinations absorb most of the tomato products exported by the Greek industry, in Europe as well as the Middle East, the Far East, the US, etc. In total, more than 40 countries worldwide import and consume significant quantities of pastes, canned tomatoes and sauces of Greek origin. This widespread commercial distribution, based on operations that are 80 percent focused on foreign markets, means that Greece was able to rank 10th in 2017 among worldwide paste exporters, 4th among canned tomato exporters and 35th among exporters of sauces. In terms of revenue, the country ranked 13th worldwide with a turnover for its exports of 62 million euros (approximately $76 million on average over the past five marketing years).
“Things have changed regarding exports,” says Mr George Polychronakis. “There has been a partial adaptation of the tomato crops to new varieties addressing the requirements of the international markets and exports are picking up. In fact, fresh tomato exports have increased approximately 7.1 percent in volume between the years 2017 and 2018 and 9.4 percent in terms of value for the same period.”
By refocusing production on more elaborate product categories, the Greek industry has initiated a new set of dynamics that is more than likely to carry fruit in the years to come. Already, the value of each ton of raw tomatoes for distribution in foreign markets has been greatly improved in recent years: over the past 20 years, the value of each ton exported has grown from 112-113 euros to 207-208 euros.
“Greek tomatoes are in many ways superior to their counterparts from other countries. For one, they are grown in a clean environment and they are free from pesticide residues –pesticides are not necessary in Greece,” confirms Mr Polychronakis. “As a result, there is a strong interest from other countries. Specifically, Thessaloniki and the Lasithi prefecture in Crete export mostly towards the Balkans and the countries of Central Europe, as do the prefectures of Heraklion and Chania, also in Crete, Messinia in the Peloponnese, and the regions of Imathia, Thesprotia and Thrace in Northern Greece.” He also mirrors the belief that Greek organic tomatoes are very popular both in Greece and abroad, stating that they have a significant export potential not only in the Balkans, but also in other international destinations.

Cooperation between FOOD EXPO DIGITAL 2021 and the Greek Exporters Association