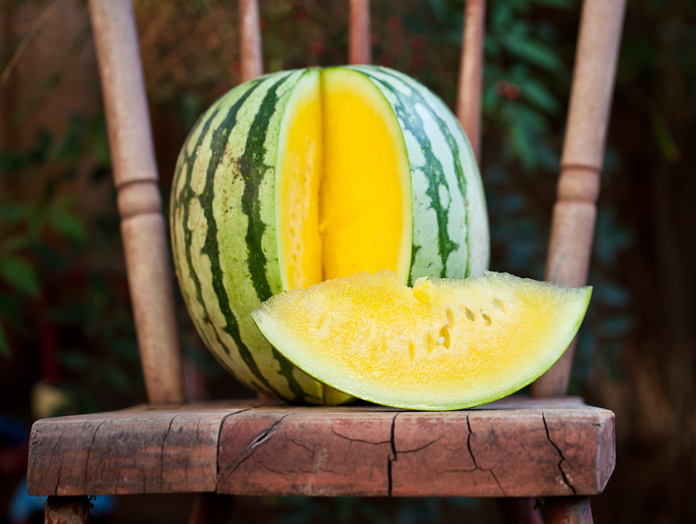 Greek watermelons are synonymous with summer –I mean, who can resist their juicy, delicious taste? And how about yellow watermelons?
The yellow watermelon is a product of cross-pollinations. It comes from hybrids and has undergone multiple crosses between various watermelon varieties so as to reduce the lycopene responsible for the red color and for the caronene that gives the yellow color to prevail.
Regarding morphology and taste, the yellow watermelon is very similar to its famous “sibling”, the red watermelon. The differences are that its skin is a little whiter, its flesh is yellowish and its flavor is slightly less aromatic and sweeter, whereas in size it is much smaller than an average classic red watermelon. And although both are equally sweet in taste, yellow watermelons have less sugar content.
In terms of marketing and retail, yellow watermelons have the advantage that they can last up to two months. The reason is that yellows, just like mini red watermelons, while they do indeed have seeds, lack genetic material.
Their advantage over the market is that they last up to two months. The reason is that these watermelons, like the mini corresponding red ones while they have seeds, lack genetic material. This effectively means that the seeds will not produce any sprout –which feeds on the flesh of the fruit to multiply– and as a result, they can be kept longer. Furthermore, there is no specific fruiting period, so production time is also extended.

In America and Asia, as well as in other regions, yellow watermelons have been cultivated for decades, while in Greece their production dates back to less than ten years.
For the time being, their production takes place in Messinia, and it seems that if a farmer takes yellow watermelon production seriously, the yield can be quite high. The producers of yellow watermelons state that although they have the same selling price as the red ones, yellows made 25% more profit, which makes for a very attractive factor to engage in this crop.
It is worth noting that 95% of the yellow watermelons cultivated in Greece are exported to Central and Northern Europe. In these countries, people are more accustomed to buying fruit for small and short-time consumption, while in Greece people are just now and due to the economic crisis beginning to adopt this buying behavior.