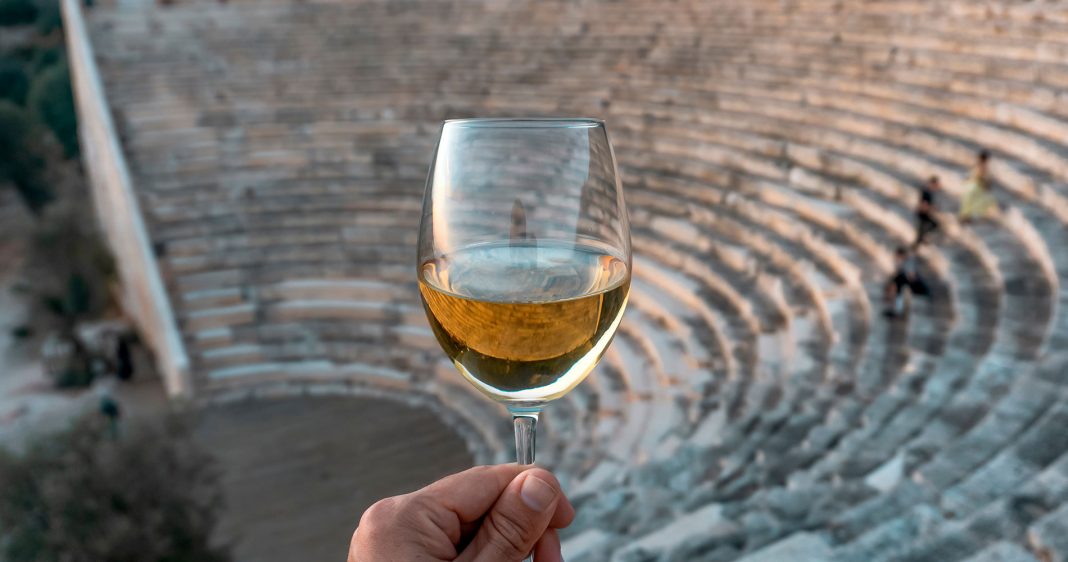 Among the best known traditional Greek wines, Retsina has a rather controversial reputation. Long overshadowed by other distinguished local wines and appellations, it is nevertheless undergoing a Renaissance while aiming to change the often distorted views regarding one of the oldest and most unique Greek spirits.

Rеtsina is resinаted winе, which means it is produced with the addition of the natural resin extracted from pinus halepensis (commonly known as Aleppo Pine) during fermentation of white and, in rare cases, of rosé wines. The maximum amount of addition is 1kg/hl. Having left only its aroma in the wine, the resin is then removed.
Intensely aromatic, balanced and refreshing, Retsina is a wine that embodies the taste of Greek summer. It goes very well with fish, seafood, cheese and appetizers.
The main reasons for the use of pine resin during the vinification process of Retsina since antiquity –it is indeed an exceptional, centuries-old wine and the Greek tradition of making Retsina is considered to be over 2000 years old– was the proximity of vineyards to resin-producing pine forests, especially in Central Greece; resin was used to seal the mouth of the amphorae (ancient ceramic vessels used for storage and transportation of wine) and coat their interior for insulation and preventing the wine from coming into contact with the air; it was added as a wine preservative, while, as an additive, it improved the composition of inferior wines; and it lent the wine its particular aroma.
“By adding pine resin, from woods mostly in Southern Attica, the wine acquired exceptional characteristics, such as botanical, mastic and rosemary flavors and aromas, combined with the characteristics of the Savatiano and Roditis varieties,” explains Mr Vassilis Nikolou of Nikolou Winery, located in the heart of Koropi, in the outskirts of Athens, at the very place where the Nikolou family has been producing wines since 1920. 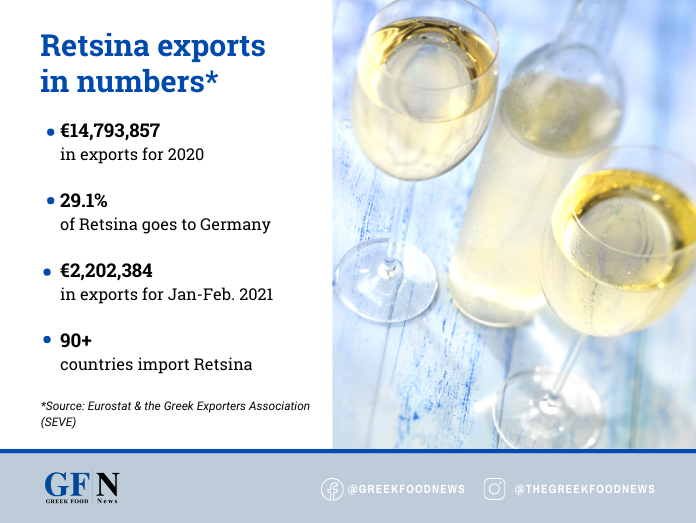 Where tradition meets the future

Retsina is produced and bottled at specific locations in Central Greece: Attica (mainly the area of Mesogia), Boeotia and Evia. It is a traditional Greek wine, which has been considered for many decades as a cheap popular choice. This was a result of the industrialization of its production, as well as the oxidized profile of the wine itself that over time created a bad reputation to consumers both on national and and on international level. Indeed, mass-market Retsina is usually the cheapest wine available in Greece. Often, in cities like Athens, it is mixed with soft drinks and consumed by those on low budget. These are the cheap versions that have given to even the most serious Retsina a bad rap.
Nevertheless, Retsina appears to be undergoing a revival. There are several producers demonstrating that if Retsina is grown properly and vinified carefully, it can be a delicious wine that goes beautifully not only with a wide variety of Greek foods, but with many other cuisines as well. These producers who have embraced Retsina are trying to transform it into a complex wine, a cultural tradition of which modern Greeks can be proud.
“Despite the rapid spread of Retsina over time, the low quality of wine stunted its development at least until the ‘90s when certain winemakers came up with the vision to upgrade the quality and restore the image of our traditional wine”, explains Mr Stelios Kechris, oenologist, CEO and Commercial Director of Kechris Wines in Thessaloniki, one of the leaders in quality Retsina.
“It is a very difficult decision to invest in a wine as misunderstood as Retsina. However, Retsina is a unique product with potential that still remains unexplored. Despite beliefs to the contrary, quality Retsina is a very difficult wine to make. It is also a wine that could become a trademark for Greek wineries,” he argues.
“The modernization of winemaking has highlighted the quality of Retsina”, discloses Mr Nikolou. “Innovative winemaking techniques, the reduction of resin percentage to the fermentation, the creation of sparkling Retsina (similar to Champagne, with a second fermentation in the bottle), the labeling of the variety and the date on the bottle, give added value to the beloved wine.”
In addition to the traditional methods of making Retsina, Mr Kechris points out that “Scientific research and experimentation can and should be key parameters for the development of Ρetsina.” 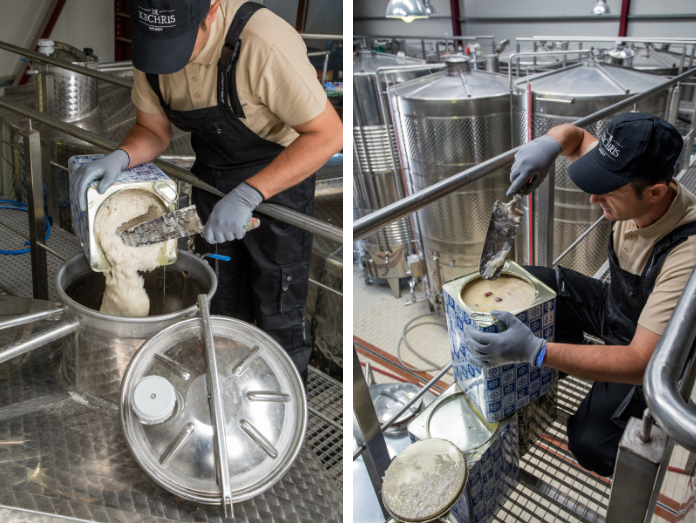 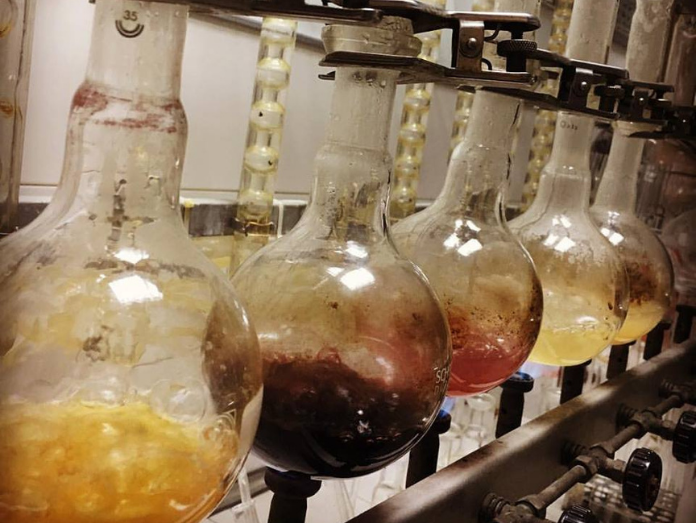 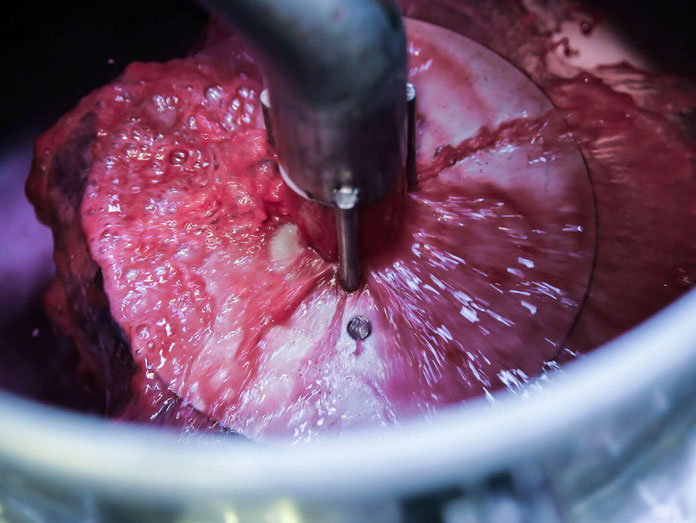 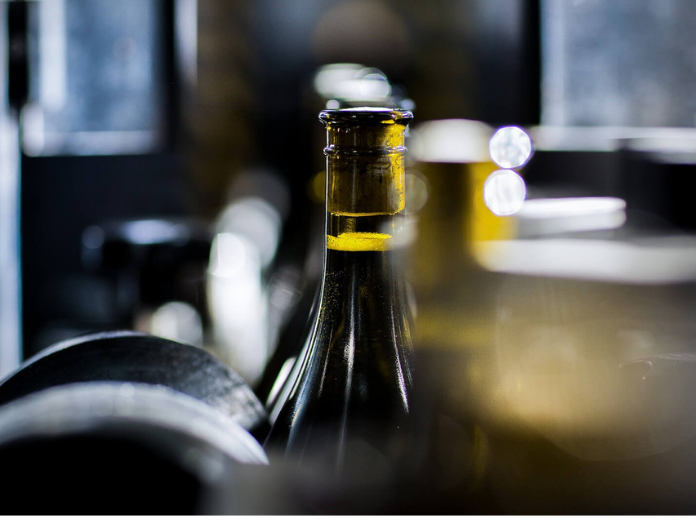 Only Retsina produced in Greece can carry the indication “Traditional Designation”.
The vineyards of Attica, mainly in the Mesogia area, together with those of Viotia and Evia –in the valley of Chalkida and the plain of Lilantio– account for most of Greek Retsina production, traditionally from the Savvatiano and, to a lesser degree, the Roditis varieties.

Retsina does not exhibit flamboyant aromas. Rather, it’s more about texture and subtlety. Premium quality Retsina carries the characteristic balsamic aroma of pine which, however, does not inhibit grape aromas. The imperceptible sense of bitterness leaves a refreshing aftertaste akin to that of a carbonated refreshment and makes Retsina the ideal companion of the flavorful dishes of traditional Greek cuisine. Retsina wines made with Assyrtiko grapes tend to be more angular in their style (but age longer) whereas, Retsina wines made with Savatiano grapes have a more generous taste with ripe apple and peach flavors, as well as an oily texture on the palate.

Retsina can be produced using several of Greece’s white grapes. Some of the best examples are made with Assyrtiko grapes as their base. These wines had the structure to age over 8 years and aged wines became more round, lush and seemingly sweeter. Another other popular choice is Roditis and Savatiano.
Contrary to popular belief, Retsina is not only white. According to legislation, in addition to white wine, retsina can also be rosé, usually from Xinomavro variety. However, regarding the varietal composition of Retsina, the law does not specify which varieties should be used.