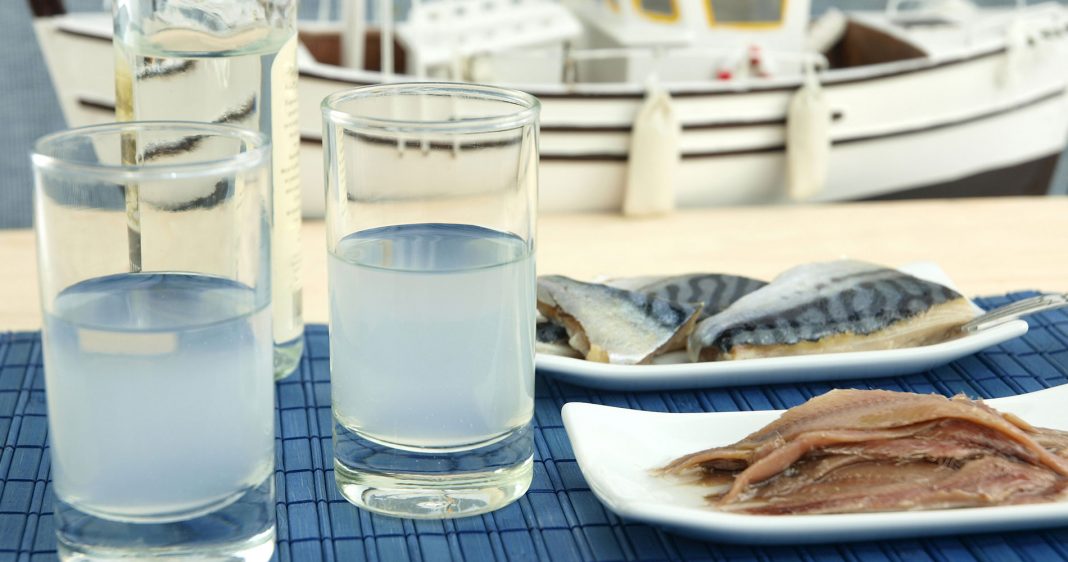 Combining the unique herbs of the Mediterranean with a traditional process dating back thousands of years, ouzo is the most famous of Greek spirits. Once tasted, its distinct flavor is rarely forgotten. Ouzo may be the most sociable drink ever born; It is the drink of the Greek way of life!

Ouzo is an alcoholic spirit with aniseed, traditionally and exclusively produced in Greece. On October 25, 2006, Greece won the right to label ouzo as an exclusively Greek product. The European Union now recognizes ouzo as a PDO product, prohibiting makers outside Greece from using the name.
The difference between ouzo and other aniseed-flavored spirits is the way it is made: usually, in Mediterranean anis drinks the fragrant seeds are immersed in water and, afterwards, added to the alcoholic solution. To make ouzo, however, the aromas are naturally produced by distilling the seeds together with the water and the alcoholic solution.

According to Greek law on ouzo production, the world-famous drink must be produced by distilling 96 percent alcohol by volume rectified spirit of agricultural origin and aniseed or possibly fennel seed. The alcohol flavored by distillation must represent at least 20 percent of the alcoholic strength of the ouzo.
Apart from aniseed, other flavorings such as star anise, fennel, mastic, cardamom, coriander, cloves, mint, and cinnamon are sometimes used. And while the quality, variety and particular blend of these ingredients distinguish one ouzo from another, it is the size, shape and material of the boilers, the quality of the alcohol, the different extraction methods, as well as the speed of distillation that determine the quality and the flavor of each brand of ouzo.

Ouzo production is a traditional process which begins with distillation in handmade copper stills. The mixture of alcohol, seeds and other aromatic substances is left to stand for a certain amount of time, ranging from one to three days –this is the initial phase where the the herbs release their flavors and aromas. Then, the blend is distilled at an even temperature while the flavors and aromas are developing inside the stills. The first distillation is called the fore-run, but the full flavors and aromas of ouzo are developed in the heart, the middle fraction of the process. The heart is then slowly distilled again and, finally, the essence is stored in large tanks to settle. This ripening phase is called “adoloto” and it is at this point where the ingredients finally bond. Before ouzo is bottled, it is mixed with pure spring water to achieve the appropriate alcohol level (between 37.5 and 48 percent).
When water or ice is added to ouzo, which is clear in color, it turns milky white and releases more of its aromas; This happens because anethole, the essential oil of aniseed, is soluble in alcohol but not in water. Diluting the spirit causes it to separate creating an emulsion of a distinct milk-like color.

“In Europe, there are other aniseed-flavored liquors, but by law neither one can be called ouzo unless it is produced in Greece.”

The history of ouzo starts sometime around the late 11th century in Asia Minor, then part of the Byzantine Empire. The cosmopolitan Greek merchants and marines of the time mastered from Arab and Ottoman spirit-makers the art of creating aniseed-flavored drinks and carried this knowledge with them at the Aegean islands, starting from Mytilene, and then Macedonia and Thessaly. Most historians agree that the name “ouzo” comes from the Turkish word “üzüm” which means “grape” and “grape juice”. According to another popular belief, the term “ouzo” was born in Tyrnavos, in Thessaly, from a resourceful Greek merchant exporting his products in Marseilles into wooden boxes with the inscription “uso Marsiglia” (“to be used in Marseilles”).
After 1922 and the end of the Greco-Turkish war that resulted in a population exchange, especially from Anatolia, ouzo production was brought to Greece through the island of Mytilene (as well as from other Aegean islands, such as Chios, Samos and Ikaria, but on a smaller scale) and Macedonia. Mytilene claims to be the originator of the drink and remains a major producer, but nowadays the spirit is produced all over Greece. 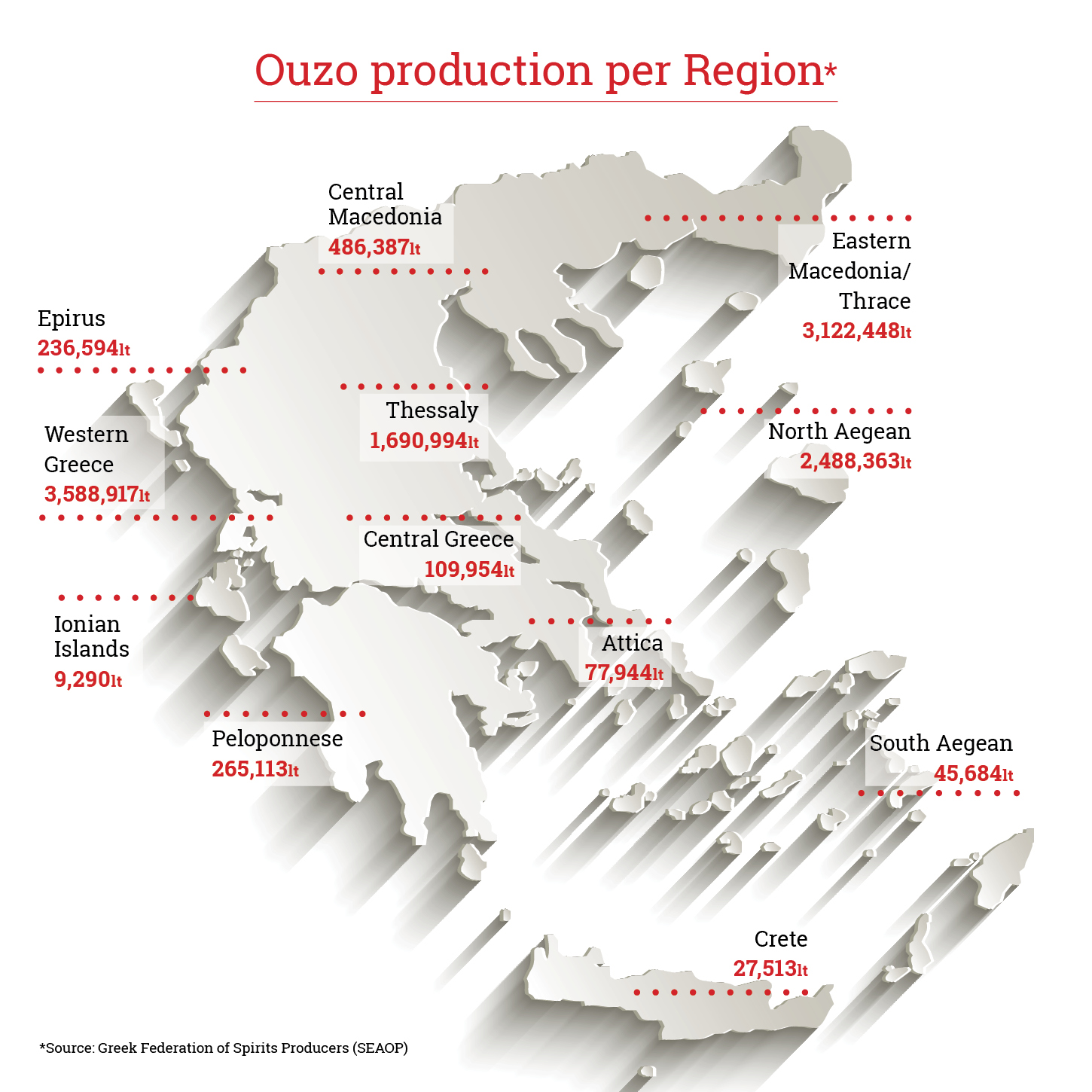 Ouzo is a particularly strong drink; It is also an acquired taste, but one that can be acquired quickly. It can be best enjoyed with sour, savory, and spicy meze (appetizers served in small dishes or Greek hors d’oeuvres), always depending on personal taste and the place where one is experiencing this “ouzo ritual”. Seaside locations prefer fish and seafood, such as fried or marinated anchovies, mackerel, sardines, etc., whereas in the Greek mountains, sausages, pickles, cheese, etc. are served. The most classic, however, meze consists of olives, some bread, cheese, a quartered tomato, and cucumber.
Ouzo is always better served with water than plain –one part ouzo and two parts water. Water gives ouzo the right flavor, enhances its aromas and helps achieve a better gastronomic harmony with the meze. Ice cubes are to be avoided –they “numb” the taste and alter the aftertaste of the drink. The right way to drink ouzo is to mix it with iced-cold water.
Branded ouzo is delicious and perfectly safe. When consumed in moderation and with the right amount of meze, ouzo can be an exquisite experience, linked to the sun, the sea, and the joy of life!

Each label on each bottle of ouzo indicates the location of the particular distillery as well as the distillation process followed by the producer.
When the label states “100% distilled ouzo” it means that this particular product is pure ouzo, mixed with pure spring water, according to the afore-mentioned process. These kinds of ouzo are considered extremely aromatic and of the highest quality.
When the label does not state anything in particular, this is a sign that the bottle contains at least 20 percent pure distilled ouzo. The rest 80 percent of the drink consists of alcohol, water, flavoring substances –mostly anethole (anise camphor),– and sometimes even sugar. Consequently, this ouzo is a by-product of mixed ingredients.

Special thanks to the Greek Federation of Spirits Producers (SEAOP), the Region of North Aegean & Ouzo Plomari Isidoros Arvanitis

A cooperation to support olive-growing, livestock farming and fisheries