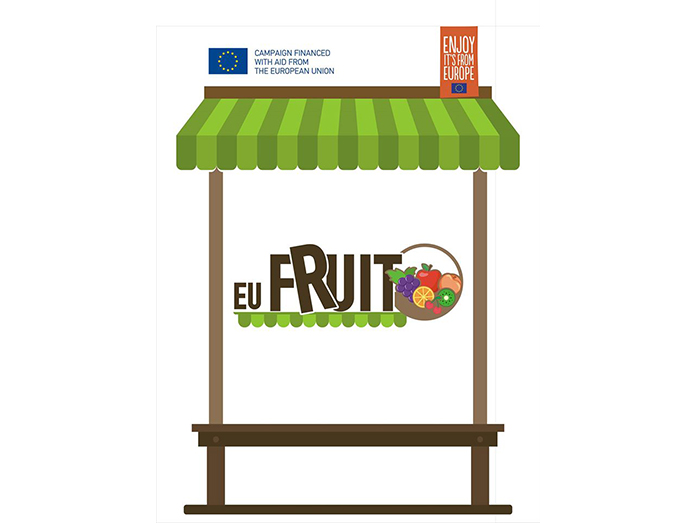 The “European Fruits” campaign, dubbed “EU Fruit”, has just concluded its first year of activities in the markets of Greece, Germany and Poland, including in-store tastings that gave more than 20,000 consumers the opportunity to sample the campaign’s fruit salad made of 100% European fruits.
“Through this activity we have collected so far over 5,000 questionnaires from Greek, German and Polish consumers, with interesting data on their shopping behavior and fruit consumption,” said Anta Tsaira, the campaign’s project manager. “The consumer sample will expand to other cities and regions of the three countries throughout the campaign duration, giving us the opportunity to have a better understanding of what the consumer prioritizes when selecting fresh fruit.”
According to Tsaira, the campaign aims to discover how aware consumers are about the quality and safety of EU fruits, as well as the importance consumers place on origin, price and production ethics when selecting which fruit to buy. In fact, the general objective of the program is to inform the target groups in the selected countries about the benefits of fruit and vegetable consumption in the context of a balanced diet and to increase the market share of European fruit and vegetables.
In addition, visitors at Fruit Logistica next February will be given the chance to meet a delegation of more than 15 Greek and Cypriot producers and discuss their products. Furthermore, educational activities in schools will be launched in the spring of 2020, with the campaign’s ambassadors and influencers spreading the message in each country that European fruits are safe and have an excellent taste and a high level of traceability.

When discussing promotional activities for European or third countries, Tsaira said, it is always important to take into consideration the particularities of each market.
“It is very important to build up knowledge on each market before launching a promotional campaign, but it is also important to jump on the bandwagon early,” she said. “So it is recommended that some ‘testing’ activities are implemented on a trial period, in order to get familiar with the market first-hand and to scale up bigger interventions. A trade show, a farm visit or a small-scale event is a good idea for a first approach in a new market, allowing a better understanding of its particular needs and limitations.”
The “EU Fruit” campaign includes a mix of different promotional strategies, allowing the campaign to address different target groups in the same period of time. According to Tsaira, some activities are targeted at consumers directly, some at journalists and some at trade. “Our goal is to educate consumers on the quality of European fruits, and this requires a multifold approach that includes direct tastings, communication messages conveyed through social media and press, and educational activities. In our view, the most effective way of attracting new consumers to European fresh produce is to understand what their main concern is and adjust your messages accordingly. Is it a lack of awareness, a lack of interest or the price? In our experience, a lot of consumes are simply unaware of the importance and popularity of European fresh produce on the global fruit market, or even completely unaware that certain countries are major international players in the production of specific fruits. For example, not many consumers in Greece know that Greece is the third largest producer of kiwifruit worldwide.”
The campaign is a joint collaboration of the following agricultural cooperatives from Greece and Cyprus: NESPAR Agricultural Cooperative (Greece), Agricultural Cooperative of Sagittarius NESTOS (Greece), Agricultural Association of Velvento Fruit “DIMITRA” (Greece), Farmers Association of Framourias (Greece), Agricultural Cooperative of Pangaio Grape Producers – SYMBOL (Greece), and CYPROFRESH CYPRUS SEDIGEP (Cyprus).