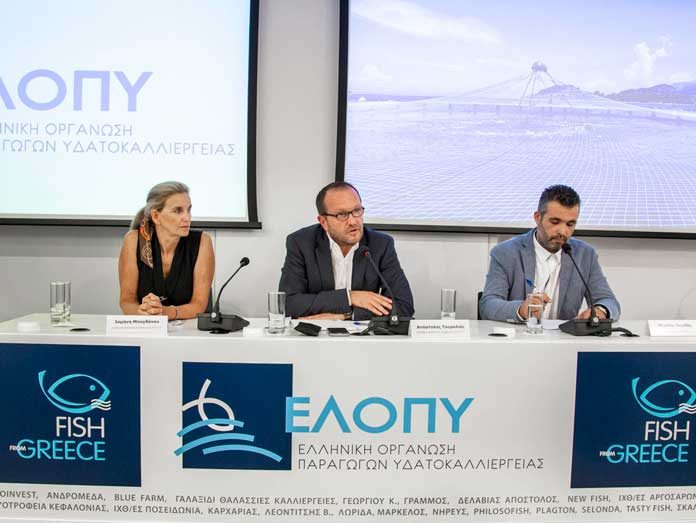 The Hellenic Aquaculture Producers Organization (HAPO) is investing in extroversion –especially in Italy, which absorbs a large portion of its members’ exports– by certifying the production units of its 21 members and marking their fish products with the trademarked “Fish from Greece” logo.

The certified and registered brand “Fish from Greece” represents the unique Greek identity of all fresh fish raised responsibly, with care, know-how and expertise by members of the Hellenic Aquaculture Producers Organization at fish farms located in the unspoiled Greek sea, according to European regulations. With an easy, distinctive, memorable name and embracing hues of light blue and sparkling white, the colors of the Greek flag and sea, “Fish from Greece” is the new seal of confidence and trust for seafood buyers and consumers across the globe and is supported by a dedicated certification protocol.

The privately owned, nonprofit Hellenic Aquaculture Producers Organization was established in 2016 with the primary aim of fostering the growth and development of its members. Representing approximately 80% of the Greek aquaculture industry, HAPO is self-financed through the contributions and donations of its members, to whom it provides a wide range of active support in terms of collaboration, development, advice, problem-solving, networking, training, liaison with authorities and more.

The organization’s mission is to firmly establish the Greek identity and highlight the exceptional characteristics and competitive advantage of the fresh Greek fish branded “Fish from Greece”, raised with the utmost care by its members in the most ideal locations of the country’s seas.

In that context, Mr Apostolos Touralias, Chairman of HAPO recently hosted a dinner in honor of representatives from the Ministry of Foreign Affairs of the People’s Republic of China where the export of Greek aquaculture products to China was discussed. The visit of the Chinese delegation to Greece was organized at the initiative of the Greek Ministry of Rural Development and Food and in particular by the Directorate General of Veterinary Medicine.

Greek fruit exports in Germany at +58.6% amid pandemic