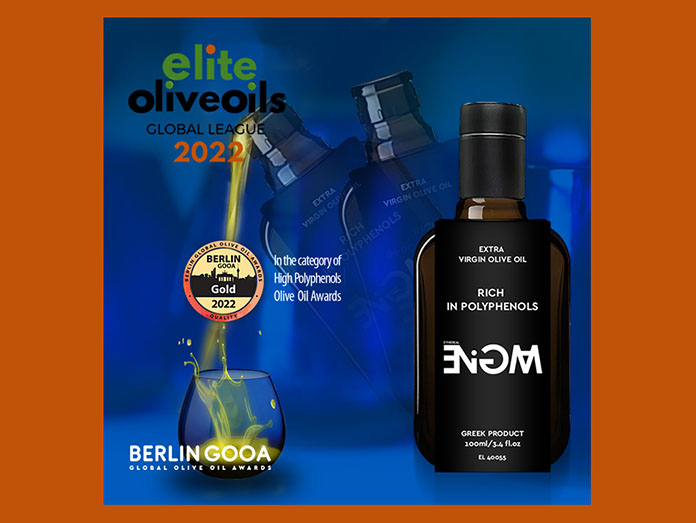 Hellenic Fine Oils SA participated with the high in phenols olive oil “Enigma” in the Competition, which is considered one of the most reputable and strict in the world in the ranking of olive oils.

Enigma olive oil scored high on quality testing and evaluation standards, deservedly winning a place among the Elite Olive Oils, the top products for this year. The high quality Extra Virgin Olive Oil “Enigma” managed to stand out mainly because it is rich in phenols. Daily intake of high quality, rich in phenols (at least 250 mg) olive oil has been associated with a lower risk of cancer (such as breast cancer), lower risk of cardiovascular and metabolic diseases, Alzheimer’s, osteoporosis and osteoarthritis. “Enigma’s concentration in phenols is twice the average and therefore its beneficial effect could be ensured even with a daily intake of only 10g.

In this year’s Berlin GOOA competition, held in April 2022, more than 870 olive oils competed, coming from 30 olive-producing countries worldwide, such as Spain, Italy, Greece, France, Israel, Morocco, Portugal, etc. Given the fame of the competition, the international recognition of “Enigma” olive oil is an unmistakable guarantee of its high quality.

The company’s activity focuses on the production and bottling of olive oil and seed oils and in the trade of delicatessen products since 2000. Hellenic Fine Oils is one of the leading companies in the food sector in Greece and a member of ELLA-DIKA MAS Initiative. Thanks to its structure, the company is particularly flexible to the needs that arise, but can also adapt to the changes of the market. It has a strong presence both in the field of retail and wholesale, as well as in the HO.RE.CA sector, and it is one of the most important suppliers of branded & private label products in large chains in Greece and abroad. Today, Hellenic Fine Oils exports to 35 countries on all 5 continents.

Chipita focuses on Mexico and Slovakia for 2020