Spoon sweets, a delicious Mediterranean custom, are taking over the world with their singular flavors, as well as their unexpectedly nutritious profile.

Spoon sweets are sweet preserves served as a gesture of hospitality in Greece and other parts around the Mediterranean basin. They can be made from almost any fruit or vegetable, though sour and bitter fruits are especially prized. Spoon sweets are usually offered to guests served by the teaspoon in a small glass dish or bowl, with coffee or tea and cold water. Most of the time they are homemade, but nowadays they can be easily found in most supermarkets. They can be used as ice cream or yogurt topping, or, in the Western way, as a spread on toast for breakfast. Spoon sweets are also delicious served with cheese.

According to the latest culinary trends, fruit desserts, and natural, minimally processed ingredients are expected to be in vogue during the next few years. Add to that the fact that spoon sweets are considered discretionary purchases –as global per capita income increases, consumer spending typically increases on such items as well– and you have the… recipe for success.

Fruit preserves can be found in most Greek homes, prepared using traditional recipes handed down from mother to daughter. They are made by slowly and gently boiling fruit in water and sugar over several hours or days, until the syrup sets. A small quantity of blanched almonds, slivered or whole, may also be added for crunch, often to baby eggplants, apples or grapes. Ingredients variously added during the boiling, and then discarded, include a quill of cinnamon bark, or a mint bouquet, or the green fragrant leaves of rose geranium, which add some astringency to the mix.
Tradition is upheld in the making of spoon sweets at small, artisanal, usually family-run businesses producing gourmet offerings that are later introduced to the discerning customers of ethnic delis all over the world. On the other hand, major Greek companies have the ability to supply super markets, and c-stores on a grand scale, without making allowance for quality. These businesses generally make jams and preserves, and only recently –due to increased international demand– have expanded into spoon sweets. Production takes place in state-of-the-art units, where fruit and vegetables are processed with respect to the superior nature of the produce used, while adhering to the Codex Alimentarius’ safety guidelines. Spoon sweets are usually packed into glass jars or plastic containers, and due to their processing method, contain no artificial preservatives.

Some of the fruits that are used for spoon sweets include seedless grapes, bergamot, apples, cherries, oranges and kumquats, lemons, quinces, figs, etc. Even soft fruit like melon or watermelon can be prepared in such a way, although retaining a relatively firm texture is challenging. Many fruits or parts of fruits that are normally inedible, such as various citrus peels and blossoms, can be made into sweet preserves, as can vegetables such as baby eggplants, cherry tomatoes, carrots, and olives. A well-made spoon sweet retains the original shape, color, aroma and taste of the fruit. 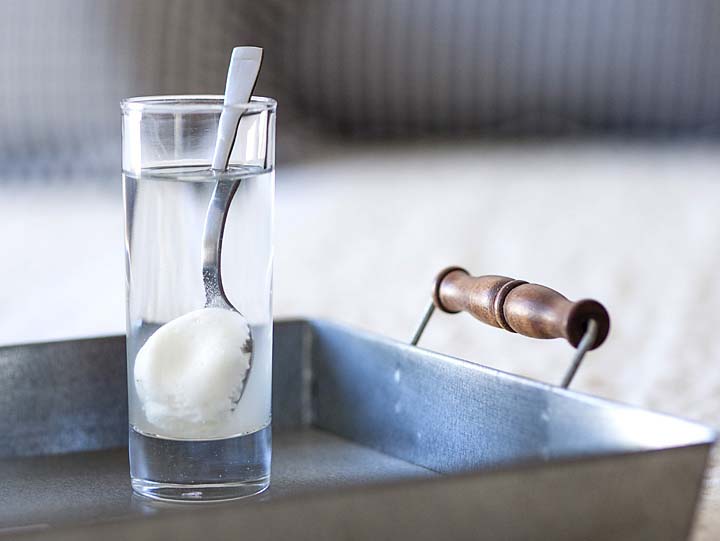 One typically Greek spoon sweet is the intensely aromatic Vanίllia, which, actually, is not made of vanilla, but of the world-famous Chios Mastiha. It consists of a thick, white, sweet paste made by beating mastic resin with sugar. It is usually served as a spoonful of sweet submerged into a tall glass of ice-cold water, and is popularly called a “vanilla submarine”. The Greek diaspora introduced it to the world, where it gained unexpected popularity.