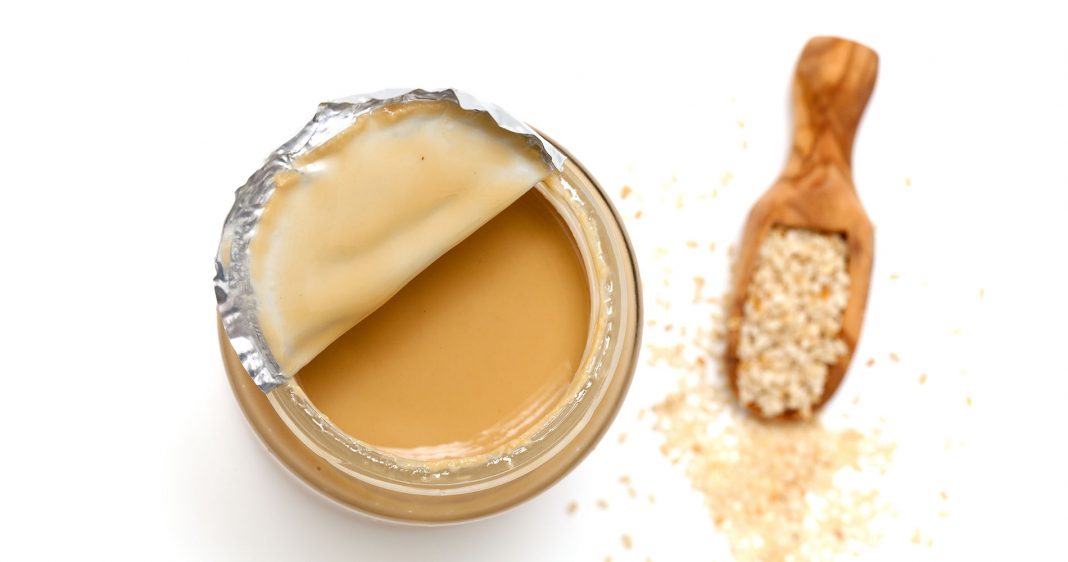 Most commonly used as an ingredient in Middle Eastern dishes, tahini’s flavor and versatility –not to mention its superfood status– also make it an ideal element in innovative dishes, both savory and sweet, especially created for the savvy, health-conscious consumer.

Tahini is the ground pulp of sesame seeds, which are first soaked in water and then crushed to separate the bran from the kernels. The crushed seeds are soaked in salt water, causing the bran to sink. The floating kernels are skimmed off the surface, toasted, and ground to produce an oily paste. According to nutritionists, tahini, is packed with similar immune-boosting, cardiovascular-protective abilities to superfoods like olive oil, walnuts, and flaxseeds. To Greeks it was known since antiquity. In fact, they used the seeds as a paste mostly in sweet pastries filled with soft goat cheeses. In the Byzantine times, sesame seeds were also used in the preparation of sweets and especially a type of sesame brittle made with honey and filled with nuts.
Nowadays, the most renowned place to enjoy tahini and halva (another delicacy made from sesame) is Thrace, in Northern Greece. And although most sesame is currently imported from Third World countries, such as Sudan, Greeks are known for their extensive know how in the production of sesame bars, halva, and tahini. In fact, Greek sesame products are considered among the best in the world.

According to a survey carried out by Future Market Insights, demand for tahini is the highest in sweet/savory/spreads food, such as hummus, falafel sauces and sweet tahini molasses. FMI’s end-user survey also revealed that extraction of tahini accounted for 59.3% of the total sesame market. According to tahini manufacturers, 45.5% of tahini is consumed through sweet/savory products, whereas distributors estimated the consumption at 50%. Tahini is least consumed in the form of bakery and confectionary and mostly consumed in households and by downstream industries. These two segments collectively account for over 80% of end-use.
According to Future Market Insights, innovation in food processing technology is catalyzing the production capacity and this will help manufacturers to cater to the burgeoning demand in the future.

“The tahini market in the Middle East and Mediterranean region is worth approx. $1,081.7 million”

Geographically, the market is segmented into four regions namely Middle East excluding GCC (Turkey, Israel, and Lebanon), North Africa, GCC and Mediterranean Europe (France, Spain, Italy and Greece). Middle East excluding GCC and Mediterranean Europe together constituted more than 69% of the market share in 2014 which is expected to remain stable by 2020. The large market size of Middle East excluding GCC is attributed to robust export of tahini in the region. The domestic consumption is rising moderately, however, exports are largely responsible for the inflated market size. Major growth is expected to come from Mediterranean Europe and GCC. Mediterranean Europe is projected to increase 190 BPS between 2014 and 2020, while Middle East Excluding GCC is expected to lose 240 BPS.North Africa is the third largest market with 16.8%, whereas Egypt is the most potential growth market in North Africa.
Key drivers fueling the growth of this market are burgeoning demand for authentic Mediterranean and Arabic food, greater inclination towards seed based spreads, robust exports and upgraded technology to produce innovative products for the demanding customers. Due to their strategic location Turkey, Greece and Israel have high export turnover. The US, Mexico, Brazil, China, India, GCC, Iraq, Russia and UK are preferred location for export where demand of tahini is continuously rising. In addition, most of the mature markets of Euro Mediterranean countries are hit by the crisis and thus, people prefer to eat home cooked food, thus sale of spreads and dips is on rise in these regions.

Tahini is used as an ingredient in cooking or as a dip on its own, and is extremely popular in the Armenian, North African, Israeli, Cypriot, Turkish, Iraqi, Iranian, Levantine, and, of course, Greek cuisines as one of the most versatile and easy to use ingredients.
Having established its superfood status (it is filled with protein, vitamin B, calcium, phosphorous and iron, while it contains the heart-protective antioxidant sesamol, which is anti-inflammatory and can help with arterial health), tahini has been rapidly expanding into the global markets, especially favored by people who wish to lead a healthier lifestyle. In fact, recently, sales of tahini are said to have nearly doubled. Supermarkets, which had barely heard of the stuff five years ago, suddenly can’t get enough of it.
As a result, Greek companies –always at the forefront of innovation– have used tahini to produce more than just a simple, albeit tasty, paste. Tahini is mixed with cocoa and orange, is enhanced with probiotics, is served into portions with honey and sesame sticks, and is, in short, marketed as a gourmet product and developed to appeal to a wider customer base.
Gone are the days of the traditional tachinopieia (literally places where tahini is made); these days the many intriguing tahini offerings are produced in state-of-the-art factories and are subject to substantial R&D.