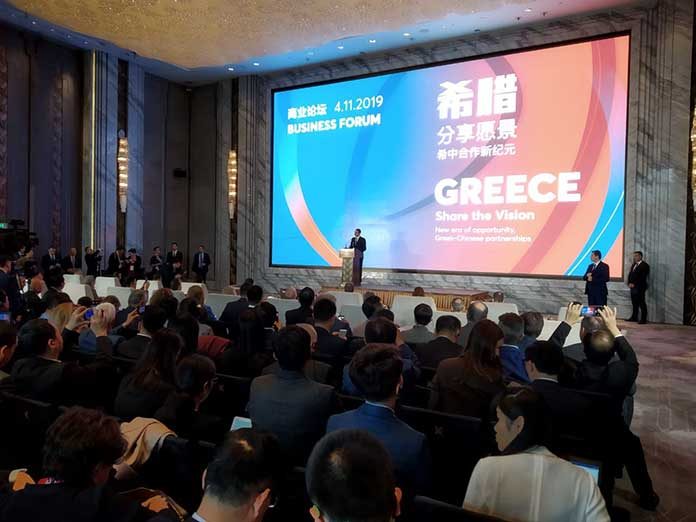 Greece participated as one of the honored guest countries in the 2nd China International Import Expo (CIIE) –the largest import expo in the world– that was be held on 5-10 November 2019 in Shanghai. The CIIE 2019 was co-hosted by the Ministry of Commerce of the People’s Republic of China and the Shanghai Municipal People’s Government, in partnership with the World Trade Organization, the United Nations Conference on Trade & Development and the United Nations Industrial Development Organization.

At the Greek Pavilions, visitors were invited to travel across the centuries in the capsule exhibition “Greece-5000 years of Civilization” while having a comprehensive overview of new opportunities in investment and trade in Greece.

B2B meetings between Greek and Chinese businessmen were also arranged, while a Greek Business Forum was organized with the participation of the Greek Prime Minister, Mr Kyriakos Mitsotakis who opened the Forum with the presentation “Greece – China: A New Era in Economic Cooperation – Re-Introducing Greece as a business-friendly country”, followed by remarks delivered from representatives of the Chinese Ministry of Commerce and the Shanghai Chambers Association. Additional presentations were made highlighting the successful investment by COSCO in Greece and by Kleemann in China.

A discussion focusing on bilateral cooperation in the fields of tourism and culture followed, with the participation of Ms Lina Mendoni, Greek Minister of Culture, and Mr Konstantinos Loulis, Secretary General for Tourism Policy and Development.

During his visit in CIIE from 4 to 6 November the Greek Prime Minister also met with the Chinese President Xi Jinping.

Greece and China, representing two ancient civilizations, have established for more than a decade a successful cooperation both in bilateral and multinational level, especially in the framework of China’s Belt and Road Initiative. At a bilateral level, the two countries have concluded a three-year cooperation plan for 2020-2022 in the areas of transport, energy, telecommunications, financial services, manufacturing and research and technology.

Iason Loumidis: Raising the bar in the US