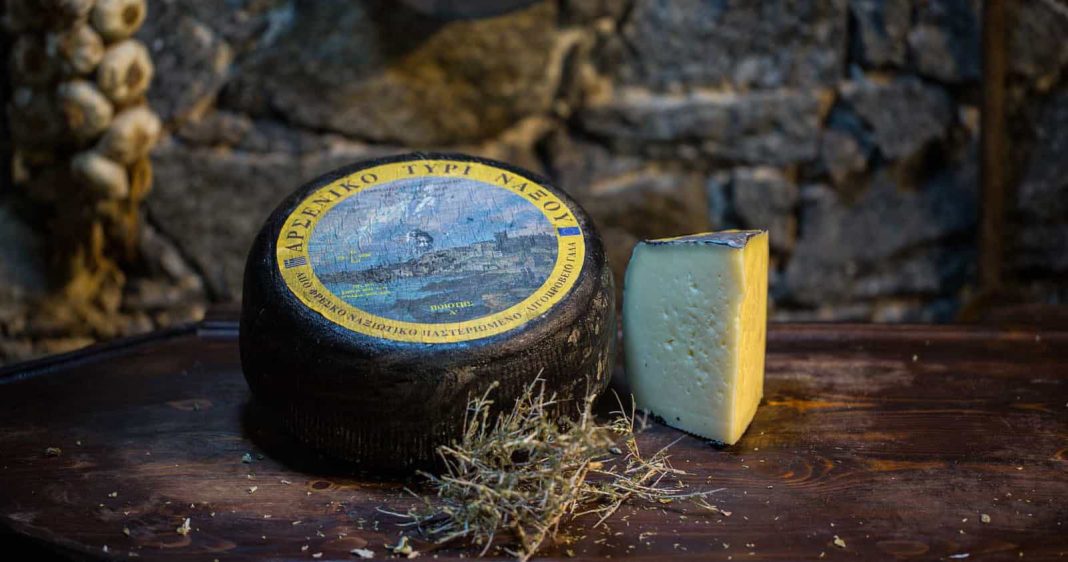 The island of Naxos is home to some unique products, such as the intense and flavorful “Arseniko” cheese, which was just recently listed by the EU as a PDO denomination.

The list of patented PDO Greek cheeses was recently enriched with yet another excellent product, a unique cheese hailing from the island of Naxos. With a thousand-year old tradition, “Arseniko” (meaning “male”) cheese, at least according to folk tradition, owes its name to its properties: hard in texture and sharp in taste.
A spicy sheep’s and goat’s milk cheese made for over a thousand years in the highlands of Naxos, and drained in special baskets called “tirovola” that give it the pattern on its dark ring. It is a yellow hard cheese and its piquant taste is somewhat reminiscent of that of ripe cottage cheese.
Its production is still done the traditional way, with lots of care and passion. The milk is collected and heated and afterwards, rennet is added and the curds are gently agitated. They are patiently stirred with a wooden spoon and when they start to come together, they are emptied onto a kneading bench. The liquid I  kneaded for hours to remove the whey – which is collected to make cottage cheese. The kneaded cheese is salted, washed with vinegar, rinsed with water and then placed on a greased board and stored in a cool, dark place. It is brushed with olive oil (which gives it its dark rind color), while there are some that preserve it in olive oil. Arseniko Naxou requires at least three months to mature, but those in the know say the cheese should mature for at least seven months for its unique flavor to come out. 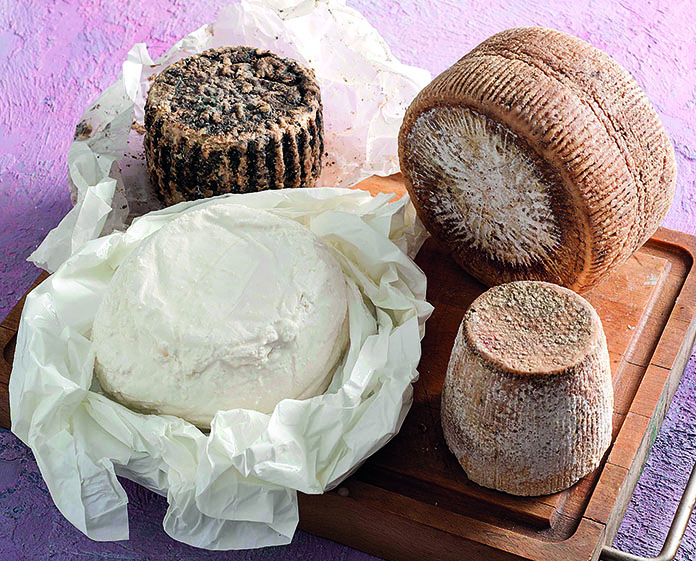 Recently, the European Commission has concluded that the conditions for the registration of the name “Arseniko Naxou” in its PDO registry are fulfilled and as a result, the delicious cheese has been given a PDO status. In fact, the ruling of the Commission was published in August 2019, but according to the EU procedure it cannot come into force until 3 months after the decision has been reached. Since that time has elapsed, we can officially say that Arseniko Naxou is the latest Greek PDO cheese.
According to Mr Valeris, Vice-President of the Union of Agricultural Cooperatives of Naxos, “The registration of Arseniko Naxou as an EU PDO product gives ita distinct identity as well as added value. At the same time, another certified product on the island is a good thing, because people are talking about Naxos and all that helps the local economy.”

Significant investment and benefits to the local economy

The listing of Arseniko Naxou cheese as a PDO product is already helping to boost the island ’s economy. In fact, Mr Valeris explains that the Union intends to establish a a small cheese factory on the mountains of Naxos, and specifically in the region of Filoti, where according to PDO requirements Arseniko should be produced. This investment, which will amount to approximately € 400,000, will benefit the the producers of the mountainous regions of Naxos.
“It will be a small unit, since the quantities of milk produced in Filoti and the rest of that particular region are small – we expect to have about 10-15 tons of milk a day,” states Mr Valeris. “The Coop has already allocated an amount of money for this venture. We are in a position to invest in the production of Arseniko Naxou thanks to our turnover which amounts to € 20-21 million per year. In this project we will be assisted by a specialized scientific and academic staff, with whom The Union of Agricultural Cooperatives of Naxos already has significant cooperation.”
An additional benefit of the designation of Arseniko Naxou as PDO product is the increase in the price of the producer. “Until now, Arseniko cheese was produced by pasteurized milk and from now on will be produced from non-pasteurized milk,” explains Mr Dimitris Kapounis, President of the Union of Agricultural Cooperatives of Naxos. “This means that the price of the raw material will increase up to 0.10 euro.

The Greek island of Naxos is the biggest island of the Cyclades and it is known for its black and white cows and their delicious dairy products. Interestingly, about 5 centuries ago, the Cycladic islands were basically the only area of Greece that had dairy cows, which explains why Naxos has such a long tradition in cow-milk cheeses, not to mention its renowned dairy from sheep and goat milk. Today, Naxos is still known for its well-developed livestock sector and the Naxiots are famous for producing some of the best Greek cheeses in the country. In fact, PDO Graviera Naxou is among the most popular Greek cheeses and is exported to countries in Central and Western Europe, as well as to the US and the UAE.

A Greek win regarding Greek yogurt in Japan

A Greek Vice-president at the Specialty Coffee Association