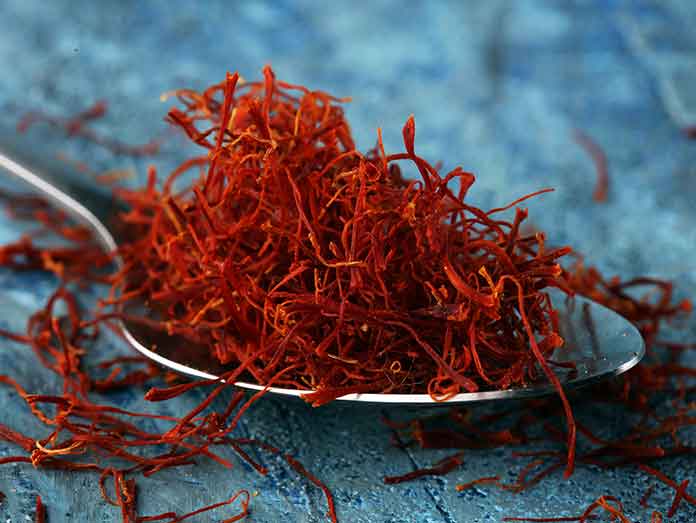 There is growing evidence suggesting that saffron may effectively treat menopausal symptoms in perimenopausal women. A study conducted by the College of Science, Health, Engineering and Education at Murdoch University in Perth, Australia, found that perimenopausal women who took a branded saffron extract (affron®from Pharmactive Biotech) twice a day for 12 weeks reported a reduction in their hormonal symptoms, which may include hot flushes, mood changes, disrupted sleep, anxiety, fatigue and vaginal dryness, not to mention that for many women experiencing premenopause can feel scary, uncomfortable and cause extra stress.
Saffron has traditionally been used to soothe complaints related to the eye, skin, and respiratory system, as well as for labour pains and its mood-enhancing affects. There’s also an increasing body of evidence supporting its mood enhancement, and relaxation effects, in adults.
For this latest study though, participants experiencing perimenopause took ether 14mg of saffron extract –or the same amount of a placebo– twice a day for 12 weeks and were asked to self-report on physical and psychological symptoms associated with the transition into menopause.
Based on data collected from 82 participants, saffron was associated with greater improvements in mood and psychological symptoms compared to the placebo. Subjects taking saffron saw a 32% reduction in their symptoms, while the placebo group saw a 14% reduction. The report showed a 33% reduction in the anxiety scores and 32% reduction in depression scores after 12 weeks. Saffron was also associated with improvements in vasomotor (e.g., hot flushes and night-time sweating) and somatic symptoms, however, changes were not significantly different from the placebo. Saffron intake was well tolerated with no reported major adverse events.
The results of this study add to the existing literature. However, the researchers insist that given the positive, mood-enhancing findings, further investigations into the benefits of saffron in more clearly-defined populations, presenting with specific menopausal complaints, will be important to conduct in future trials.

Memorandum of Cooperation between the American Farm School and Mediterra