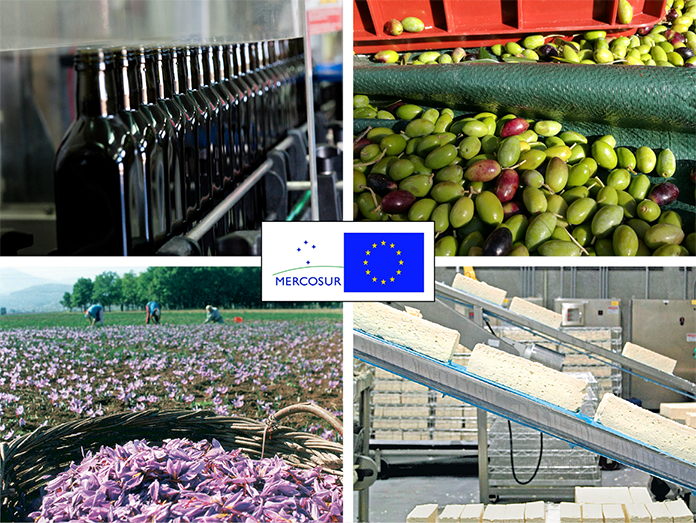 After 20 years of negotiations, the EU and South American economic bloc Mercosur have signed a huge trade deal, and Greek PDO products benefit from the deal.

The European Union and Mercosur states –namely Argentina, Brazil Paraguay and Uruguay– reached on June 28th a political agreement for an ambitious, balanced and comprehensive trade agreement, which was 20 years in the making.
The EU is Mercosur’s number one trade and investment partner. In fact, exports to Mercosur were €45 billion in goods in 2018 and €23 billion in services in 2017. Additionally, the EU is the biggest foreign investor in Mercosur with a stock of €381 billion, while Mercosur’s investment stock in the EU amounted to €52 billion in 2017.
The goal of the new EU-Mercosur trade deal is to remove barriers between the two regions and help EU firms –especially smaller ones– to export more; strengthen worker’s rights and ensure environmental protection, encourage companies to act responsibly, and uphold high food safety standards; protect quality EU food and drink products labelled as Geographical Indications from imitations.
Furthermore, the EU agri-food sector will benefit from slashing existing Mercosur high tariffs on EU export products: chocolates and confectionery (20%), wines (27%), spirits (20 to 35%), and soft drinks (20 to 35%). The agreement will also provide duty-free access subject to quotas for EU dairy products (currently 28% tariff), notably for cheeses.
EU Commissioner for Trade, Ms Cecilia Malmström stated: “Today’s agreement brings Europe and South America closer together in a spirit of cooperation and openness. Once this deal is in place, it will create a market of 780 million people, providing enormous opportunities for EU businesses and workers in countries with whom we have strong historical links and whose markets have been relatively closed up to now. The agreement will save European companies over €4 billion in duties at the border –four times as much as our deal with Japan– whilst giving them a head start against competitors from elsewhere in the world.”

The EU is a major producer of distinctive high-quality regional food and drink products such as Feta cheese, Prosciutto di Parma, Prosecco and Irish whiskey. In the EU, these products enjoy protection under a special status called Geographical Indications, which guarantee to consumers that the produce is the genuine article from the specific locality or region concerned. They also allow European producers to earn a premium price for the quality of their unique produce.
The deal will recognize some 357 European Geographical Indications, guaranteeing that only products with this status will be sold in Mercosur under the corresponding GI name.
This would make it illegal to sell imitations. This means that the use of a GI term for non-genuine GI products will be prohibited and the use of expressions such as “kind”, “type”, “style”, “imitation” or the like will not be allowed. Furthermore, the agreement grants protection from misleading use of symbols, flags or images suggesting a “false” geographical origin. For example, no-one will be allowed to call a particular spirit Ouzo unless it is the genuine ouzo made in specific areas of Greece under specific production conditions.

What happens to 21 Greek products

Within the framework of the agreement, a total of 21 PDO and PGI products from Greece will enjoy full protection. The news is of particular importance and a significant win on the part of Greece with regard to the Feta cheese denomination, a product at the core of various trade “wars” which threaten its very existence. This agreement confirms the Greek state’s position for many decades now that real Feta is a traditional, authentic Greek product and all other so-called “Fetas” produced outside the country are mere imitations. Specifically, the following Geographical Indications regarding Greek produce are safeguarded within the Mercosur region: