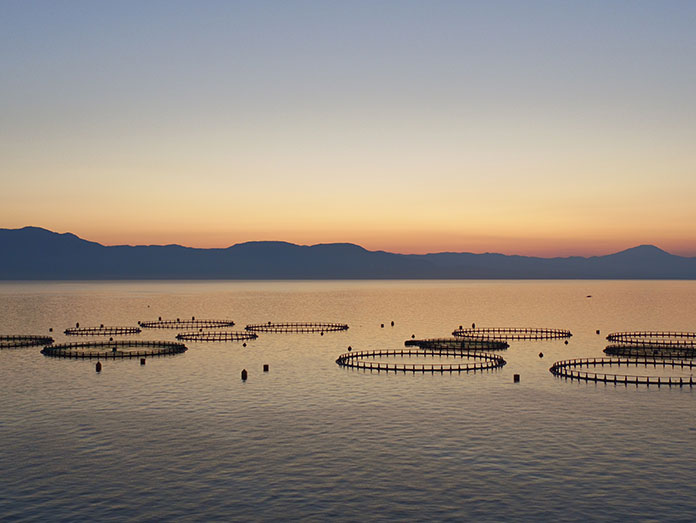 According to information, the Bill Gates Foundation (yes, Microsoft boss Bill Gates) is said to have already bankrolled the Greek-owned investment fund Diorasis International SA, which is increasingly active in the Greek aquaculture industry through the Philosofish company (formerly Bitsakos Fisheries). In fact, further financing from a leading investment company, which already participates in the shareholdings of Greek companies active in other sectors of the Greek economy, might shortly come to pass.
Philosofish is the new second largest pole in Greek fish farming, a development linked to the acquisition of Selonda and Nireus Aquaculture by the Andromeda Group in 2019 which has led to the merger of these three companies in one. In order for the European Commission’s Directorate-General for Competition (DG Comp) to approve the merger, the sale of certain assets of Selonda and Nireus to third parties was imposed. One of these third parties was Philosofish, which, although having fish farming units of 5,000 tons capacity, purchased units with 12,000 tons capacity, together with hatcheries producing 85 million pieces of fry as well as relevant manufacturing plants.
The acquisition of these new assets enables Philosofish not only to increase its presence in both the Greek and international market, but also to produce added value offerings, such as ready meals with fish. Actually, the company’s plans include the creation of a new processing unit specifically for the production of ready meals, with an estimated budget of approximately €5 million.

Prior to forming his own company, the founder of Philosofish, John Bitsakos, embarked on his career in aquaculture by taking on the construction of fish farms all over Greece. He developed new technologies and methods still being used today and learned a great deal along the way from other entrepreneurs. By 1986, he fully appreciated the growth potential of the business and, in the following decade, he played a pioneering role in establishing a fledging industry in Greece.
In 1999, the first vertically integrated site becomes operational in the pristine waters of the North Euboean Gulf adjacent to designated natural reserves and, shortly after, a hatchery and processing unit were added.
In 2014, with the arrival of Diorasis International SA, as a major shareholder, the Philosofish brand was born and a new chapter of the company’s long-standing history has begun.
In 2020, Philosofish acquired new production units and increased its total production capacity by a factor of four from 4,000 tons to 16,000 tons, positioning itself as a leading global supplier of high-quality Mediterranean seabass and seabream and cementing its place at the forefront of Greek aquaculture.

Diorasis International SA is a private alternative investment advisory firm established in Luxembourg in 2010 investing on behalf of its partners and for its own account in private equity transactions across key sectors in Southeastern Europe and, on a more opportunistic basis, beyond.
Diorasis has access to patient capital and acquires majority or strategic minority stakes in strategic sectors, actively collaborating with capable management teams that have been starved of growth capital and providing them a runway to operationalize their strategic vision and create value.

FOOD EXPO Digital: The online trade show you can trust!